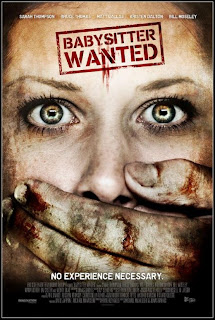 
Back in the late 1970s and early 1980s, the babysitter was all the rage in horror films. Films like HALLOWEEN and WHEN A STRANGER CALLS capitalized on this urban legend where a babysitter, taking care of two kids in a large house that was isolated from the rest of the neighborhood, received several phone calls from a crazed person who would end up killing her that night. It's a simple, yet effective, horror trope that will never die even in the midst of pointless remakes and sequels.

And even during this rough state of mainstream horror [the indie and foreign scenes seem to be where the more interesting horror is taking place], it's refreshing to see filmmakers still wanting to bring back the babysitter story that many modern filmmakers have looked over in current horror. Ti West's THE HOUSE OF THE DEVIL did this successfully last year, keeping the film retro until the last 15 minutes. However, there was a film that was pretty much overlooked for a while until THE HOUSE OF THE DEVIL was released and became successful.

That film is 2008's BABYSITTER WANTED, a film that follows the babysitter angle THE HOUSE OF THE DEVIL based its story around, but adding other elements to make it stick out from its companion film. And thankfully, BABYSITTER WANTED is definitely worth getting 75 cents an hour for.

PLOT
Angie Albright (Sarah Thompson) is a sheltered, beautiful, devout Christian girl who leaves home for the first time to attend a community college [that actually has a dorm, which is kind of hard to believe but whatever]. She ends up sharing space with a junkie for a roommate and slowly develops a relationship with a guy named Rick (Matt Dallas). Angie also feels as if someone is watching and following her. Realizing she needs money to support herself, she ends up taking on a babysitter job at the Stanton Ranch run by Jim (Bruce Thomas) and Violet (Kristen Dalton). While taking care of their "hungry" and creepy son, Sam (Kai Caster), Angie begins receiving harassing phone calls. Right after the calls, a strange man forces his way into the house. As Angie tries to protect Sam, she soon realizes that things aren't quite as they seem. 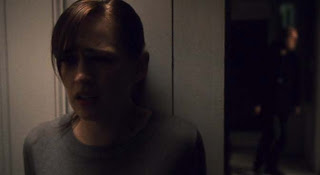 I was completely surprised by how much I enjoyed watching BABYSITTER WANTED. I wasn't really expecting much out of this film, but it's actually a very well-made indie horror film that takes the babysitter angle and gives it a bit of a twist. I was never really sure how things would go, and that's pretty rare for a modern horror flick.

It's hard to discuss the narrative since BABYSITTER WANTED is the type of film that'll be better if you don't know much about it. What I will say is that it pretty much follows the same structure as THE HOUSE OF THE DEVIL, but speeds the process up a bit. We don't get a lot of alone time with the main character, even though the development is pretty much the same. And the action never lets up, never making the watching experience dull. And the twist here happens at the halfway point of the film. I gotta say, I didn't see it coming at all. I knew this film dealt with the occult, but the reveal totally floored me. Whoever said they saw this coming is a liar unless someone told you before watching. The twist shifts the more slasher feel of the first half into a torture porn-esque feel in the second half [yes it's Final Girl vs. Big Bad as usual]. But it never goes full slasher or full torture porn. I really wish I could go into detail about what happens in this movie, but I won't spoil the experience for those who haven't watched. But it's definitely a well-written and well-paced script.

I do have issues though and it involves two of the supporting characters. The roommate angle is made to be a big deal at the beginning of the film, with three major scenes involving the roommate herself. But once the babysitting portion of the film takes over, she's never seen or heard from again. In fact, the roommate angle could have been left out and the film would still be the same. As for the boyfriend character Rick, he seems like his role was unfinished. His role seems as if he'll be the one to save the day at the end of the film, yet he's missing for more than half of the movie and is just used as a plot device to make Angie more worried. It almost felt as if the screenwriters wanted Angie to have a boyfriend and they just came up with one on the fly. I think there was potential to create an interesting character and relationship with Angie there, but it's stuck in limbo for the most part.

Directors Jonas Barnes and Michael Manasseri is very impressive. While the film does show its low budget nature at times [lighting issues and the grain of the film stock], the way the visuals are set up makes up for it. The composition is fantastic, with close ups to capture the powerful emotions of the characters, to long shots of the killer in the background while Angie hides in the foreground. The twist and turns work beautifully. There's nice tension and suspense. And they don't shy away from showing some gore. We see people getting shot, getting stabbed, getting cut open, and so on. It's not the goriest film ever but it will satisfy gorehounds. And I usually have issues with the multiple endings, but they sort of made sense in order for the story to finish [and possibly lead into a sequel]. So Barnes and Manasseri did a very nice job bringing BABYSITTER WANTED from page to screen. 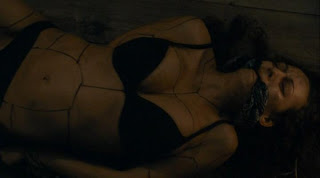 known for her performances in CRUEL INTENTIONS 2 and television's Angel [she played Eve in the last season], does an excellent job as Angie. She turns a sweet, shy Christian girl into an angry, in-your-face, profanity speaking survivor. She's very appealing to watch [both in talent and in looks]. Kai Caster as Sam was pretty creepy [kids in horror films usually are]. Bruce Thomas was great as Sam Stanton, bringing the funny to ease the tension somewhat. Kristen Dalton was okay as Violet Stanton, the sort of bitchy mom. Matt Dallas, of Kyle XY, is a good actor but he barely does anything in the film. And Bill Moseley, in an unusually normal role, does very good as the town sheriff. A very nice cast all around.

THINGS I'VE LEARNED WHILE CANCELLING THAT INTERVIEW FOR THE BABYSITTER POSITION

- Some tied up chick received a mallet to the head. That's one way to get hammered on a Saturday Night.

- Angie's roommate loves to get stoned. Like T.Rex once said, "Get it on, smoke a bong, get it on." Or something like that...

- Most of the art work that Angie took interest in involved murder and Satan. This is the type of art that would make one cut off their ear and send it to their ex. No one needs to Van Gogh that far!

STOP CALLING ME OR I WILL EAT YOUR CHILDREN, YOU ANNOYING BITCH!!!
See? Now they'll stop calling. Moving on...

- Sam, dressed as a cowboy, enjoys putting meat in his mouth. Awww, he's being raised to be one of the Village People! Y.M.C.yAy!!

- The killer had a scarred face. He said hello to his little friend, but apparently the greeting wasn't exactly welcomed.

- A priest went after Sam and Sam only. Let the choosing of the next altar boy commence!
- Bill Moseley got axed in the back. If Bubba had just killed that bitch, this could have been avoided! 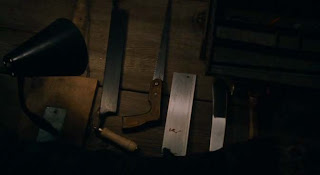 While I dug THE HOUSE OF THE DEVIL for its slow burn and retro visual style, I dug BABYSITTER WANTED for its fast pace and interesting twist. It appears that silly urban legends still have a place in modern horror. I, for one, am happy about that and I hope more filmmakers bring back the things that were so scary in films to begin with. Definitely a recommended watch. Laurie Strode and Jill Johnson would be proud of this one.