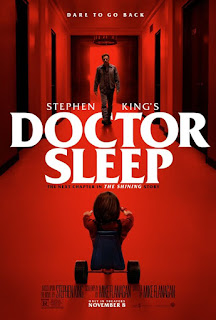 PLOT (from IMDB)
Years following the events of THE SHINING, a now-adult Dan Torrance (Ewan McGregor) meets a young girl (Kyliegh Curran) with similar powers as he tries to protect her from a cult known as The True Knot who prey on children with powers to remain immortal. 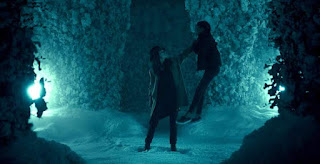 Even though Stephen King released his sequel to the 1977 novel The Shining back in 2013 to big success, not many people were clamoring or asking for a follow-up to either King’s book or the divisive Stanley Kubrick adaptation from 1980 that even King himself dislikes. But Doctor Sleep received both commercial and critical acclaim at the time of its release, although some had issues with the story’s villains and how some of the newer characters were connected to the Danny Torrance character that they felt was an unnecessary retcon of sorts. Personally, I enjoyed Doctor Sleep and figured it would be turned into a film or television adaptation because of how big THE SHINING has been regarded as a horror classic. But with King hating the Kubrick adaptation, and his own 1997 faithful-to-the-novel miniseries being considered near the lower end of King adaptations, how would the film version of DOCTOR SLEEP be presented? Apparently Mike Flanagan, of TV’s The Haunting of Hill House fame, figured it out and decided to adapt the novel as faithfully as possible, while at the same time having it take place within Kubrick’s universe. With King’s massive approval and a solid cast bringing the adaptation to life, I’m more surprised that more people didn’t go out and watch DOCTOR SLEEP this weekend than how well the adaptation was presented. DOCTOR SLEEP is a pretty great sequel and horror film in general - even having good buzz and marketing behind it, which makes me wonder what went wrong in terms of audiences.

What really sells DOCTOR SLEEP is the cast, who all do a great job in bringing these characters to life from the novel. Ewan McGregor is very good as Dan Torrance, the adult version of the young kid from the original story. McGregor is a versatile actor and he’s able to portray Dan’s trauma, fear, confusion and eventual reluctance to use his gift to save others in a believable way. Even though he did a good job filling some big shoes, I thought there are other actors that outshined him. But he is a solid lead nonetheless. Honestly, I was more impressed with Rebecca Ferguson and Kyliegh Curran as Rose the Hat and Abra Stone respectively. Ferguson plays a great villain as Rose, using her beauty to lure victims in, portraying a charm that hid a level of evil underneath. She also portrayed a malicious side that I found captivating as her character grew more desperate towards the finish line. I’ve seen Ferguson in other films and always thought she was fine in those other roles. But this is the first time I felt truly impressed by any one of her performances. She’s really good here, as her presence here is pretty amazing. I also like Curran’s performance as the young Abra, a teenage girl who also has similar powers to Dan, but much stronger. Curran is truly confident in her performance, portraying a typical teenager well who is smart, brave and intuitive. She also upstages both McGregor and Ferguson at times, making her a force to watch. I also liked Cliff Curtis in his role as Billy, sharing some nice chemistry with McGregor as their two characters grew as friends and started to trust each other. Zahn McClarnon is also solid as Crow Daddy, Rose’s lover and right-hand man. He had a threatening presence that added a lot to the story. And it was cool to see a cameo from the original Danny Torrance, Danny Lloyd, who has retired from acting and is now a school teacher. Just a really solid crew of actors all around.

I also though Mike Flanagan did a great job bringing both the novel and Kubrick’s vision together in a logical and believable way visually. The flashbacks and the last act that occur within The Overlook Hotel, which looked exactly how it did back in the 1980 film, were shot and directed really well. Even with new actors playing familiar roles within these scenes, you still felt Kubrick’s presence while catering to Stephen King’s vision for these characters. I also felt the rest of the film, which just adapted the Doctor Sleep novel, looked great and felt like it’s own film outside of THE SHINING. If you’ve seen GERALD’S GAME or The Haunting of Hill House, you’ll be pleased at how similar the film looks to both of those, but with a bit more style and flair that doesn’t overshadow the story. Flanagan also focuses more on the suspense and tension rather than jump scares, even though there are a couple that don’t really work as well as they should. But overall, Flanagan focuses more on atmosphere and mood rather than frights, which is fine for this sequel. I also thought DOCTOR SLEEP was paced extremely well, going really fast for a two-and-a-half hour movie. There are some editing and transition choices here and there I could nitpick and probably change if it were me, but overall doesn’t take the experience away. I do feel that maybe the film is a bit too long for some, which may have caused the box office failure of the film. Plus, those expecting a true SHINING experience may be disappointed as DOCTOR SLEEP would rather be its own thing for the most part. I thought this was Flanagan’s best work as a director just for taking such a scary task to follow up a classic movie and actually making it work by pleasing both fans of the Doctor Sleep novel and Kubrick film all in one. 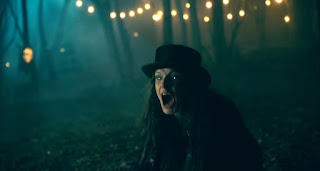 As for the adaptation itself, I thought it was mostly handled really well. Many of the core elements of the novel were done with justice in DOCTOR SLEEP. Dan’s alcoholism was touched upon, including his eventual sobriety and his role as an orderly in a hospice care facility where he’s dubbed “Doctor Sleep” due to speaking with patients moments before they pass due to this uncanny morbid awareness of the hospice's cat [who may have the “Shine” itself, as it senses death]. Then you get all the True Knot stuff where this group attacks young children who have this “Shine” so they can feed off of them like vampires, leading to an eventual confrontation with Abra [who may have the strongest “Shine” of all] with Dan helping her.

Unlike Kubrick’s THE SHINING, much of what I read in Doctor Sleep feels pretty much intact on screen. However, the film does take some liberties with the novel, but I feel a lot of them were improvements over the source material. In the novel, there is a connection between Dan and Abra that I feel would have upset a lot of people unfamiliar with it since it would have seemed tacked on if they’ve only watched Kubrick’s film and nothing else. I think getting rid of it here was a good move and just would have complicated the adaptation. The major change from book to film is pretty much the entire act. In The Shining novel, Jack destroyed The Overlook Hotel to save his family and Dick Hollorann by setting it on fire and blowing it up. But since Stanley Kubrick completely changed the ending in his adaptation and that’s what most people are familiar with, The Overlook Hotel was left standing. So Flanagan decided to keep Doctor Sleep’s ending setup while combining it somewhat with the novel’s ending to The Shining. I’m not sure which ending for DOCTOR SLEEP I prefer, but I think the one Flanagan used is a better fit for cinematic reasons. It keeps the spirit of the novel’s ending while giving Kubrick’s version of things a fitting conclusion at the same time, surprising me at how much it truly worked when it really shouldn’t have.

If I had to nitpick anything, it would be the use of the True Knot members. Rose the Hat and Crow Daddy are used very well and come off as threatening. Even Snakebite Andi gets some great moments to shine, even though I feel she was underutilized during the middle portion of the film. Grandpa Flick, the oldest member of the crew, has some nice emotional moments as well. But the rest of the crew are just faceless goons and I wish they had personalities to differentiate one from the other. I get every group needs a couple of pawns, but even the pawns should have names and characters I should remember by the movie’s end. At least they still managed to come across as evil as they brutalized a few children. That scene with Bradley Trevor is really messed up and translates well from novel to screen better than I would have thought. Children haven’t had the best of luck in Stephen King adaptations this year, have they? 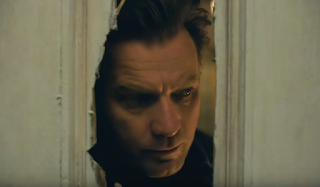 Even though mainstream audiences didn’t bother to go out and see this film for whatever reason, I thought DOCTOR SLEEP was a worthy and solid follow-up to the 1980 Stanley Kubrick’s film with a faithful-enough adaptation of the Doctor Sleep novel with added elements of both the novel and film versions of THE SHINING. The cast - Ewan McGregor, Rebecca Ferguson and Kyliegh Curran in particular - is pretty damn great, while Mike Flanagan managed to successfully adapt Stephen King’s work into Kubrick’s universe by focusing more on mood and atmosphere over jump scares and keeping many of the story elements from the novel intact. Even the changes that were made for the adaptation in terms of certain characters and even the ending work in the film’s favor, pleasing both fans of the novels and films. While some of the villainous True Knot characters could have been used more, and some abrupt moments are noticeable visually, I’d say DOCTOR SLEEP is a bigger success than I would have believed when the film was first announced. Let’s hope more people wake up for DOCTOR SLEEP because it deserves to do better than what it is currently doing box office wise.