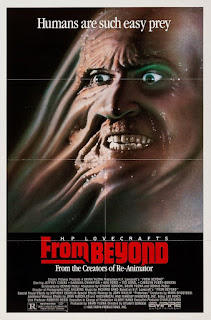 PLOT
A group of scientists have developed the Resonator, a machine which allows whoever is within range to see beyond normal perceptible reality. But when the experiment succeeds, they are immediately attacked by terrible life forms. 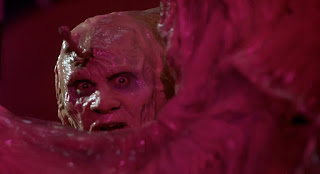 The follow up to his critically and commercially acclaimed 1985 film RE-ANIMATOR, Stuart Gordon’s adaptation of H.P. Lovecraft’s short story FROM BEYOND is an odd sci-fi/horror flick that doesn’t get as much love or attention as its predecessor. I’m not really sure why that is. FROM BEYOND has a lot of the superficial elements that audiences loved with RE-ANIMATOR - gooey and cheesy special effects, a mad scientist angle gone wrong, and this really twisted perception when it comes to horror and sex. But maybe the story, or the characters, or even the situation itself doesn’t really attract enough people to give it the time of day, or even discuss the film in general. Honestly, I hadn’t watched FROM BEYOND in decades until my recent viewing of the film, barely remembering anything important that went on besides Barbara Crampton in a hot BDSM number until this re-watch. I think as a teenager, I was more titillated by the sexual aspects rather than anything else going on. But as an adult, I appreciated the general plot and everything that encompassed it both visually and conceptually, even if the film isn’t near the level of RE-ANIMATOR.

I think what brings the film down over RE-ANIMATOR is the story itself. RE-ANIMATOR has a lot going on for it narrative wise. It has a mad scientist wanting to play God, bringing corpses back to life to not-so-great results. You have a love triangle that turns twisted when one of sides becomes this decapitated head wanting to force oral sex onto his trapped obsession. You also had the science aspect itself, which created interesting scenarios and memorable moments. And probably the best part of the narrative - it was just silly fun that was meant to scare audiences as much as it was to entertain them. The visuals would enhance the story as well, creating this complete package that gave people what they would want in a sci-fi/horror film. 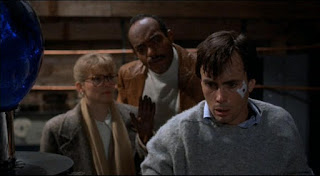 Unfortunately, FROM BEYOND’s narrative isn’t as strong or as interesting as the previous film. It’s not surprising, honestly, when you realize that what the film is trying to adapt is a simple short story that’s about six pages long and only encompasses maybe the opening fifteen to twenty minutes of the actual film. Stuart Gordon and Dennis Paoli had to extend the plot in order to make a feature film, adding characters and strange scenarios for the rest of the running time while keeping much of the Lovecraftian essence intact. It’s because of this that the story isn’t as strong as the film wants it to be, giving us characters who aren’t exactly sympathetic or have much depth to them. None of these characters come close to being as iconic as RE-ANIMATOR’s Dr. Herbert West, even though there is some attempt with the Dr. Katherine McMichaels character in a bit of a role reversal for the actors from the previously mentioned film. The characters in FROM BEYOND are more characters that live within the moment we’re given to witness, changing due to nature and situations that surround them. Dr. Edward Pretorius’ invention - a machine called the Resonator that allows the growth of normal perceptible reality through the pineal gland - turns characters seeking knowledge into different people by the end of the film. Some crave the knowledge so much that they either turn corrupt with power or just become crazy because they’re unable to handle it. Mostly, the machine seems to heighten the natures of sexuality and sensuality in whoever it encounters, using lust as a way to gain leverage over its victims.

But we only really know these characters through exposition and how they deal with the situation, which isn’t a whole lot to be honest. Dr. Crawford Tillinghast is just a victim to the Resonator, transforming into a creature who hungers for blood and sex. But he mostly cowers and grows ill from the machine. Dr. Edward Pretorius created the machine, obsessed in learning things “from beyond”, turning corrupt with the power he learns while his body deforms into something more hideous each time we see him. Dr. Katherine McMichaels is a psychologist who doesn’t believe in drugs and hospital methods of treating mentally ill people, having her own agenda as she wants to learn what Tillinghast is so scared of, becoming something Pretorius wants her to be eventually. Dr. Bloch is the skeptic in this whole mess, thinking these characters are crazy. And you have Detective Bubba Brownlee, who is investigating what’s going on while being a victim of “wrong place, wrong time”. Other than that, we don’t really know much about them nor do we care about them too much. Yes, it’s fun watching them change because of this weird invention. But I don’t feel like there are any stakes or any reason for the audience to wish for their survival either physically or mentally. The characters in RE-ANIMATOR are fleshed out and have personality that we can latch onto. FROM BEYOND suffers from a lack of that. And it’s kind of disappointing because the concept of the film is pretty cool and still manages to work and flow well in a superficial, “popcorn and beer” sort-of-way.

The real reason to watch FROM BEYOND are for the special effects, which are still pretty damn cool over thirty years later. Yes, a lot of the effects are dated, especially the green screen matte floating phallic monsters that reminded me of those Dream Demons from FREDDY’S DEAD: THE FINAL NIGHTMARE. In an HD world, they really stick out as pretty lame CGI. But something about 1980s horror makes me find these sort of effects charming in a so-bad-it’s-good manner. The real highlight involves Dr. Pretorius’ constant transformation from a normal looking human being to this melting and slimy pinkish monster that grows more disgusting with each appearance. Done with practical effects by John Carl Buechler and others, Pretorius’ metamorphosis is the highlight of the film as he changes about five times throughout the film, looking more monstrous each time. Nowadays, CGI would handle all this and make everything look more like a video game. The practical effect work create a realistic slime creature that I could believe the Resonator would create “from beyond”. We also get some cool effects involving a third eye coming out of people’s foreheads, heads either melting or getting fed upon, and random insect attacks that mutilate a body or two. While the character portion of the film may not be as strong as it should be, at least the science fiction and horror aspect of the story works due to the strong visual effects. 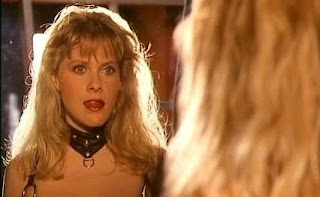 The direction by Stuart Gordon is just as solid as it is for RE-ANIMATOR. Just really a really confident eye in terms of twisted science fiction and horror, Gordon uses the special effects wonderfully to create an eerie and surreal atmosphere that drives the characters into making decisions they normally wouldn’t make in a normal scenario. The film is short and the pace is dead on, as Gordon directs his actors strong enough for us to enjoy what goes on with them, even if we can’t sympathize with them as much as one would like. Gordon gets to do a lot visually with so little, which makes him one of the more prolific horror directors of the 1980s.

The acting is pretty great as well. Jeffrey Combs and Barbara Crampton seem to have switched roles from RE-ANIMATOR, in a way. Combs plays a more tragic character as Tillinghast, caught up in another man’s horrible experiment, not knowing how to make it stop so things can be normal again. He goes through the most change both physically and emotionally, as his body decomposes due to the Resonator while he begins to lose his mind, with people thinking he’s becoming schizophrenic due to his rantings. While I think he’s had stronger performances before and after FROM BEYOND, it’s still a solid job because he’s engaging in no matter what he does. I think Crampton has a slightly stronger showing as Katherine, going from a demure psychologist with an interesting agenda to a BDSM sexpot who is full of lust in a strangely convincing manner. Unlike in RE-ANIMATOR, Crampton has a more dominant role that she can bite her teeth into and portray two very different sides of the same character. Crampton’s super talent is at full display here, as well as knocking it out of the park in her sex attire. Ken Foree is also solid as Bubba, playing a cool cat who unfortunately gets involved with something he had no idea he signed up for. He has swag and attitude for days, playing up his macho persona in an entertaining way. Ted Sorel is your typical 80s horror villain as Pretorius. He’s given one-liners and amusing dialogue as if he were Freddy Krueger in the later NIGHTMARE films, pulling off the madness he suffers through as his body changes due to his experiment. Carolyn Purdy-Gordon is also decent as Dr. Bloch, playing your typical skeptic physician. Small, but effective cast of actors. 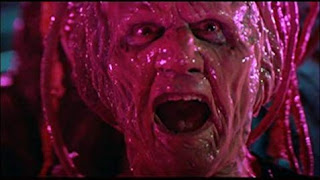 FROM BEYOND may be Stuart Gordon’s weirdest film with strange creatures, strong yet interesting performances and a level of sexual power that probably wouldn’t be released in theaters today. The characters could be fleshed out more for us to care about their plight, but the science fiction and horror aspects of the narrative are super solid due to strong John Carl Beuchler practical effects that range from odd to disgusting. And the actors, especially Jeffrey Combs and Barbara Crampton who take their roles seriously and seem to be having fun playing against-type, elevate a good adaptation that probably could be a bit better with stronger writing. It’s no RE-ANIMATOR, but still a memorable and well-structured horror film that probably deserves more love and attention than it actually does.