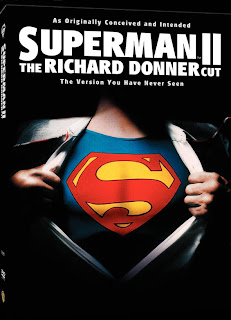 
When director Richard Donner set out to make Superman The Movie for Warner Bros., there were already plans for a sequel even before the first film was released to theaters. So, WB had Donner jump right into production on Superman II while Superman The Movie was in post production. Superman (1978) had already set up for the sequel with Jor-El sending General Zod, Ursa, and Non to the Phantom Zone at the beginning of the film who of course would be the big threat in Superman II.

Superman II had a difficult production. After shooting most of the film, Warner Bros. and the Salkinds decided that they didn't like the direction that Dick Donner was taking the sequel. Where the first film was pretty light hearted and silly fun, the sequel was more dramatic and action packed. So they fired Donner and hired Richard Lester to reshoot some scenes and gave him the full directorial credit despite most of the movie being Donner's work. Lester decided to throw out a lot of the more serious and dramatic changes that Donner brought to Superman II in favor of more silliness, thinking that families wouldn't want to see a serious Superman movie.  Superman II was released to theaters in June of 1980 to pretty good results despite the behind the scenes mess. The film did well at the box office and audiences still loved it. Though for decades the hardcore Superman fans had been craving to see what Richard Donner's original version of Superman II would be like. Fans all over wanted a Donner cut of Superman II. Summer 2006 was a big year for the Man of Steel with the release of Superman Returns, which was a disappointment at the box office and had a mixed audience, but still generated a lot of buzz around Superman. With all this buzz, Richard Donner decided that it would be the perfect time to give the hardcore fans what they wanted, his version of Superman II. Looking through the film archives, Donner took to editing all of what he shot on Superman II, archive footage from the first film, and even screen tests and morphed them into what his intentions were. In fall 2006, Superman II (The Richard Donner Cut) was released on DVD and fans to this day consider it the better version of Superman II. In fact, Superman II is considered by many to be the best film in the 1978-2006 Superman movie franchise and you know what? I'm one of them!

When Superman stopped one of Lex Luthor's missiles by tossing it up into outerspace, it caused a riff that broke open the Phantom Zone and released Krypton's ruthless military leader General Zod and two of his soldiers (Ursa and Non).  Meanwhile back on Earth, Lois begins to suspect that Clark is really Superman. She ends up tricking Clark by shooting him with a gun filled with blanks to reveal the truth that he is Superman. So Superman takes Lois to the Fortress of Solitude to show her more about him that includes under the covers. Prior to this, Lex Luthor is broken out of prison by Eve Teschmacher and discovers the Fortress and learns more about his arch nemesis.  While Superman and Lois relax inside the Fortress, Zod and his two followers come to Earth to rule the planet as they tried to do on Krypton. They use their heat vision to leave Metropolis in ruins and even force the President of the United States and the military to kneel before them and to give them the USA.  Superman realizes that he is in love with Lois and wants to have a normal life with her so Jor-El makes him Human. After returning to the States, Clark gets beat up by some trucker douchebag at a diner, learning that being Human ain't as great as he thought it would be. But, things get worse when he discovers that Zod has broken free and has taken control of America with intentions to conquer the whole planet. So Clark finds a way to get his powers back to stop Zod, but is it too late?

I really enjoy Superman II. Like many Superman fans, I consider it the best in the 1978-2006 movie franchise. While I like Superman The Movie, this film was more exciting to watch because it had a more threatening foe for Superman to fight. Luthor wasn't a big challenge, but Zod has the same super powered abilities as does Ursa and Non so Superman had to fight harder to save the planet. I also thought the chemistry between Lois and Superman was stronger here. They obviously are attracted to one another from the start, but their relationship has the chance to be really fleshed out here. I mean Superman GAVE UP his powers to be with her. That's huge! And I liked that actions actually had consequences. He gave in to selfish pursuits and in return it almost destroyed the planet because when he was supposed to be watching over Metroplis and the people of Earth, he was in his Fortress getting "close" with Lois Lane so Zod had the perfect opportunity to start ruling.

While I was bothered by Hackman's version of Lex Luthor being the big bad in Superman The Movie, I actually enjoyed him much more here because he wasn't played as the villain of the film. General Zod was the big bad with Luthor as just a weasel who wanted Zod to give him a piece of the pie if he gave him info on the Boy Scout. Still not convinced that he is Lex Luthor, but I could tolerate him a lot more in Superman II than in Superman The Movie.  Otis and Eve Teschmacher were very small characters here than in the first film, which I appreciated even though I was entertained by them. I still find it hilarious that the Fortress of Solitude has a bathroom.

General Zod was a great and memorable villain in this film. There's a great reason that Jor-El had imprisoned him, Ursa, and Non in the Phantom Zone and we can see why.  Terence Stamp is pretty intimidating just with his eyes. You can see a soulless destroyer in this character. Ursa may have been a vicious cold hearted bitch, but damn she was sexy. I don't know whether to be intimidated or turned on with her character. Non was basically just the big bearded guy who is all muscle and mute. For some reason he reminded me of Jaws from the old James Bond films.

The special FX while a little dated these days are still pretty good. It was cool to finally see the heat vision even it was done more by the villains as well as the windy breath. It would have been nice to have seen Superman use his heat vision more and we never saw him do the wind breath.

The music score by the great John Williams is still epic. Love that they kept those awesome opening credits with the blue light speed zoom.

I have one big gripe about this movie though. I HATED the part where Superman reverts back time to make it where Zod, Ursa, and Non never broke out and that Lois never found out that Clark was Superman. It just felt like a cheap shot. Like whenever things don't go Superman's way, just change the clock back to where it never happened. While we all have to make decisions and deal with the consequences of those decisions, Superman gets to screw up and just erase it from happening. What the Hell? I know that he has the ability to do it, but just because you can fix your mistakes by turning back the clock doesn't mean you should! He was happy with Lois AND could have still been Superman. He could have fixed all the things that Zod destroyed. It's not like he doesn't have the speed or strength to do it. I don't know, it just felt like a cheat. Now in Superman The Movie, it worked better because Lois actually died. But here it just did not work for me.

The acting was pretty solid. Christopher Reeve was still awesome as both Clark Kent and Superman. He's just so charming. Margot Kidder was good as Lois Lane. Terence Stamp really stood out as the villainous General Zod. So intimidating and creepy. Can't wait to see Michael Shannon in the role soon!  Jackie Cooper and Marc McClure were good as Perry White and Jimmy Olsen. Sarah Douglas was very hot as Ursa. Femme Fatale characters just turn me on. Jack O'Halloron was good as the strong yet silent Non. Ned Beatty was funny in his small role as Otis, Lex Luthor's stupid sidekick. Valerie Perrine was amusing in her small role as Eve Teschmacher. And Gene Hackman was fun to watch as Lex Luthor. Still not a big fan of making Lex a silly villain, but at least he is fun to watch, even in that horrendous Superman IV: The Quest For Peace.

The direction by Richard Donner was even better than the first film. Donner was the first person to show a more dramatic Superman before a dramatic Superman became popular. It's a shame he was screwed over in favor of another director being hired to lighten up the film. And while I'm not a big fan of Superman Returns, I will say that without that film generating buzz in Superman which hadn't been in the mainstream eye since 1987, this version of Superman II may never have happened. Now I have never seen the theatrical version except for maybe a view bits here and there when my Dad would watch it on TV, but this to me is the only Superman II. I just act like the Lester version doesn't exist. Donner's cut is the only version I've seen and it is the only version I will continue to see.

Overall, Superman II is a very good movie and is a case where a sequel is actually better than the first film. I have and will continue to enjoy this movie. But, I do have a strong feeling that Man of Steel will become my definitive Superman movie and that Superman II will become my 2nd favorite movie starring the blue and red Boy Scout. Too bad that the franchise would fall from here, which is why a reboot was absolutely needed to update Superman for the 21st Century.