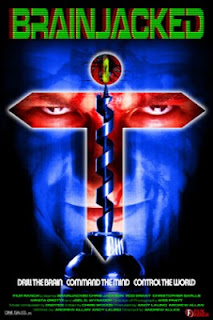 
I couldn't imagine living my entire life under the strain of constant headaches. I don't suffer from migranes, but hearing from people who do, it's not a fun time. Even light headaches from being sick with a cold or flu annoy the hell out of me. But what if someone had a method that could take away headaches forever, even if it did come with a hefty price?

Well I received a screener from Breaking Glass Pictures called BRAINJACKED, which answers the above question. And let's just say that I would risk having my brain throb out of my skull than deal with what some lunatic doctor's "cure". Luckily, BRAINJACKED won't give one a massive headache. Unfortunately, it won't cure a massive headache either.
PLOT
Tristan (Chris Jackson) is dealing with really bad headaches, to the point where he can't function. What's worse is that his father's not around, and his stepfather films his mother getting gangbanged by junkies. After trying to stop his mom's actions, the junkies screwing her throw Tristan out of the house and into the street, where he gets mugged not much later. How much can a teenager take?

While trying to sleep on a park bench [thankfully not next to Aqualung], a pretty blonde named Laney (Somali Rose) invites Tristan to meet a doctor named Karas (Rod Grant) after noticing his trouble with headaches. Proudly displaying this scar on her forehead, Laney explains that Dr. Karas specializes in an unorthodox method that takes away headaches forever, providing shelter for some of his patients as well. Tristan is understandably unsure about this news, especially after meeting him. You see, some of his patients [mainly runaways] tend to look up to Karas as some sort of savior, worshipping the ground he walks on. But the stress of the headaches cause Tristan to seek treatment from Karas regardless, which involves getting drilled in the skull to relieve pressure. When the "operation" is over, Tristan is free from his headaches. But strange things begin to happen, making Tristan realize that his freedom has come with a price.

D and DARKNESS. I chose to watch BRAINJACKED first because the premise of the film grabbed me more than DARKNESS. It sounded a bit like H.P. Lovecraft's work, with its science fiction-horror vibe. It's too bad that the script and the budget limited the idea's potential, because BRAINJACKED could have been really great if the dominos had fallen into place.

The screenplay is really the film's downfall. It's not a horrible script at all. Andrew Allan and Andy Lalino do a decent job trying to flesh out their interesting idea. I mean, what other movie has a mad doctor drilling holes [the drill is part of his arm, by the way] to "cure" headaches while implanting a microchip inside the hole in order to control his patients? It's a great premise for a film! Who wouldn't want to see that? Unfortunately, Allan and Lalino don't take it far enough for BRAINJACKED to really stand out. Instead, the two decide to make a film about a doctor doing these experiments in order to create a brainwashed cult, who will do his bidding to take over the world, until one of his patients figures it out and tries to stop him. It takes something that's as original as an idea could be and turns it generic. I would have liked to have learned more about the experiment itself and the motives as to why this doctor is even doing what he's doing. But we're not given any background about any of these issues [or any of the characters really besides Tristan], leaving Tristan's battle to stop this man seem a bit thin and disconnected.

Besides, the whole idea of this man taking in countless runaways, who ALL seem to have these massive headaches, just for him to drill their heads to even make this all possible is a bit far-fetched. The film is too grounded in reality for this to be believable. In fact, as the film rolls on, we learn that EVERYONE in this town has been drilled by this guy. And he's implanted microchips in all of them that causes them to become zombies to this man's goal with the use of some remote control. How does this one man manage to experiment an entire town without not one person knowing something isn't right? Especially since they black out every time Dr. Karas takes control over their throughts and bodies? It takes away a level of suspense and tension from the film. In fact, a film like this deserves some sense of paranoia for the audience and for the protagonists. But since we don't know why this is happening, or even how, it's hard 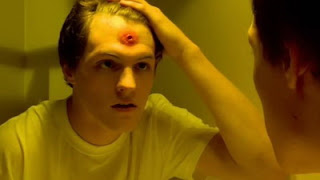 to invest ourselves in this conspiracy. It just leaves BRAINJACKED as an average action-thriller. That's fine and all, but with a premise like this, it deserved more. At least it never bored me, so that's a plus. But it could have, no should have, been more cerebral in its storytelling.

The special effects in BRAINJACKED are actually quite good for its low budget. We get close ups of drillings that the director doesn't cut away from. We also get an eyeball pulled out of a socket. And the final gore sequence was quite delish. No CGI here, which I greatly appreciated. Plus, we do have some boobies on display. I mentioned that in this section of the review only because some of these boobs looked to be manmade, if you get my drift. No complaints in this department.

The direction by Andrew Allan was pretty good. I really enjoyed the visual palette of the film. It's very colorful, with a lot of neon green, blue, and red. It really creates this otherworldly atmosphere and mood that is refreshing from other low budget sci-fi works. Plus, the film is mainly shot at night, creating a bleak and dark look to BRAINJACKED. I also thought there was some nice style and the action sequences were shot well. It's not a bad film visually at all. I wish it was a bit more tense and suspenseful. I also wish it was more exciting too. Some parts bored me to be honest. But the direction was overall decent.

The acting is decent. Chris Jackson was pretty good as the lead, Tristan. He carried the film well and wouldn't mind seeing him in more films. I thought he was very likeable and had some nice charisma. Rod Grant was totally campy as Dr. Karas, but it worked for his character. I totally bought his 'mad scientist' act with his smarmy performance. I really wanted to slap him everytime he smiled or smirked. That's a good villain right there. Somali Rose was cool as Laney. She was cute and had a lot to work with in her performance. She handled it well. The only actor I thought was pretty annoying was Christopher Sarlis as Zane. I don't know if that's really him or the director made him sound this way, but it seemed as if he was doing a poor man's 'Batman voice' act that just grated me. It's bad enough that Christian Bale does it in BATMAN BEGINS and THE DARK KNIGHT. We don't need another gravely voiced character. It's too bad because I think the performance could have been decent without this distraction.

THINGS I'VE LEARNED WHILE GETTING DRILLED IN A NON-SEXUAL WAY

Sorry, but there's no "Things I've Learned" today. C'mon, I had a headache and I wasn't in the mood to perform! Sue me!

BRAINJACKED is an okay film that had a lot of potential but failed to live up to it. But it still has a unique premise, decent visuals, good special effects, and decent acting for the most part. So if you're looking for something that's potentially different on the surface but pretty common stuff underneath, BRAINJACKED is your film. It just might get drilled into your skull.