Santo and the Blue Demon Against the Monsters (1970) 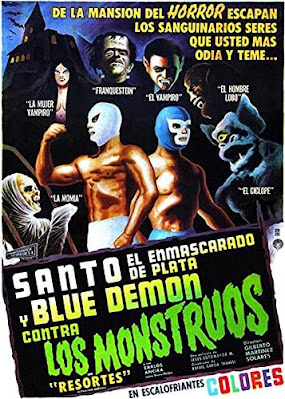 Plot: Bruno Halder, a sinister scientist seeking revenge against his brother and niece, is resurrected by Waldo, his faithful sidekick. Besides his minions of zombies, Halder enlists the help of Wolfman, Franquestain, a Vampire, a Mummy and a Cyclops. Once again the survival of mankind is put in the hands of Santo and Blue Demon. 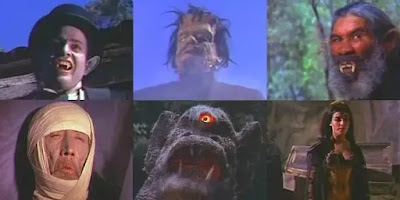 Some films defy a critical review because they’re not made for that intent. 1970’s SANTO AND BLUE DEMON AGAINST THE MONSTERS is one of those films, as the movie is meant to be a silly and fun B-movie and nothing more. Part of the many entries within both El Santo and Blue Demon film series, the film is basically wrestlers battling Mexican versions of classic monsters in various locations - including a memorable sequence where El Santo wrestles a zombie-vampire luchador in the squared circle. Not much of a plot to dissect, the direction is pretty shaky in terms of editing and pacing and all the actors are hamming it up to the fullest. But it’s charmingly goofy and everyone involved seems to be having fun, especially the actor playing the Vampiro who is having a blast gliding towards scared people and biting on women’s necks. Plus, any movie with a silly looking Cyclops creature, an out-of-place dance number, and Luchador clones gets a pass from me. Weird but extremely amusing from beginning to end. Sometimes that’s all you want from a movie. 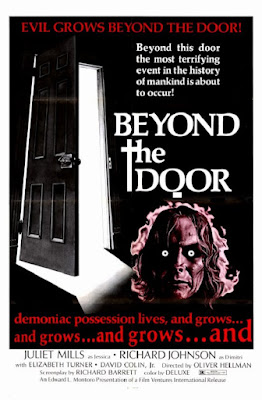 Plot: Jessica Barrett, wife and mother of two young children, begins to show signs of demonic possession while pregnant with her third child. As she seeks help from her husband and doctor, a mysterious man approaches her and seems to have some answers.

When you take 1973’s THE EXORCIST and sprinkle bits of 1968’s ROSEMARY’S BABY on top of it, you get 1974’s BEYOND THE DOOR - a weird Italian rip-off that is an interesting watch for sure. You get the typical aping of many classic elements of THE EXORCIST, like a child slurping pea soup out of a can, creepy head spinning, demonic voices who enjoy foul language and a final act involving the possessed person terrorizing her loved ones while being tied to a bed. Add in Satan’s baby inside of the possessed person and you got yourself some supernatural trouble! 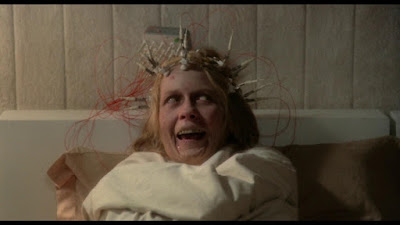 Despite the film looking pretty nice and containing a catchy and jazzy score that makes you dance more than scared, the screenplay is a big mess due to seven writers putting this together. How is anyone supposed to care about characters lacking depth? They’re either presented as useless or annoying to the point where you don’t feel bad for any of these folks. Hell, even the children talk with such foul language that you wonder what kind of parents raised these kids to be insufferable brats? Then you have this ex-lover who just pops up and becomes a main character in the final act of the film - which is just confusing as heck in itself - and you’re wishing you were stuck with Regan, Father Karras and company. Plus, there are a lot of scenes that run too long and feel like filler to beef up the runtime. I started feeling bored for a while until the demonic activity picked up within the last 40 minutes of the movie.

That being said, there’s an odd charm about BEYOND THE DOOR that makes it at least a watch for horror films. There’s some subtext that’s never really explored, but the film is obviously about a woman wanting to run away from domestic life, i.e. being a wife and mother, and wanting to live free as an independent woman tied down to important responsibilities. There is a great scene involving dolls and toys becoming possessed that will most likely freak out those with that phobia. And there aren’t many movies where a character is randomly harassed by a musician playing a flute with his nose. Fans of possession and demonic type of horror films will probably get something out of BEYOND THE DOOR, even if it doesn’t live up to its great trailer or the two films it takes its inspiration from.