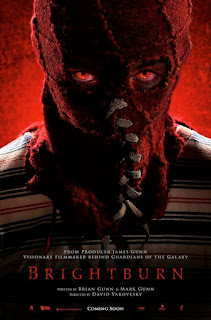 PLOT (from IMDB)
What if a child from another world (Jackson A. Dunn) crash-landed on Earth, but instead of becoming a hero to mankind, he proved to be something far more sinister? 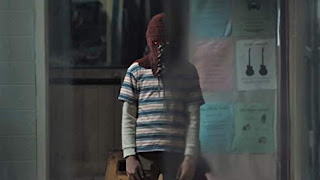 If you can sum up the plot of the James Gunn produced BRIGHTBURN, it would be “What if Superman had turned evil instead of standing for truth, justice and the American way?” It’s not a foreign concept, as comic books and recent video games [such as the Injustice series] have used the angle of having one of the most popular and powerful superheroes take a ride on the dark side. BRIGHTBURN plays out like a DC Comics “Elseworlds” scenario, in which a Superman-like character would eventually come from an alien planet destined to rule it by any means necessary, no matter the good nurturing he received from human parents during his childhood. I’m surprised not many films have tried to visually execute a story like this, but maybe BRIGHTBURN proves it’s for good reason. While the film does a lot of things well, it unfortunately flounders on its most important asset - its story.

Let’s get the good stuff out of the way first. The horror aspect of BRIGHTBURN is done very well. This isn’t surprising since the film was produced by James Gunn, who comes from a horror world via Troma and later on with films like SLITHER and some aspects of 2010’s SUPER. The film gives us a nightmarish vision of what Superman would be like if he just used his powers to cause destruction. And the film never shies away from that, as we see some pretty gory stuff that you wouldn’t see in most superhero films. We get a cringe-worthy moment where glass impales someone’s eye, heat vision burning off a face at point-blank range, letting people fall to their deaths from out the sky, and so on. It carries its R rating well, especially when these scenes are directed with some nice tension and suspense to build up to these horrific scenes. If BRIGHTBURN was trying to be the anti-superhero film, the horror aspect sure helps in achieving that.

I also enjoyed the acting in BRIGHTBURN as well. Both Elizabeth Banks and David Denman are pretty good as the wannabe Kent parents, Tori and Kyle Breyer. Banks, especially, really plays on the emotions of a mother who doesn’t want to believe the miracle baby she found and raised turns out to be a homicidal maniac with superpowers. That’s not to say that Denman is any less good as the father who is quick to wash his hands of his son’s malicious nature. Their dynamic with each other feels very realistic and I thought they grounded the story. The star of the film is Brandon/Brightburn himself, Jackson A. Dunn. Dunn looks like an innocent child, but plays an evil one very well. I thought he portrayed his confusion as to who he was convincingly, slowly making it easy to believe his sociopathic tendencies when he did terrible things. I thought he was very unnerving whenever he had interactions with his crush, played well by Emmie Hunter. He came across very creepy in those scenes. I wish the script gave him more depth at times, but Dunn well-handled whatever the script gave him to do. All around, I think the acting was good. 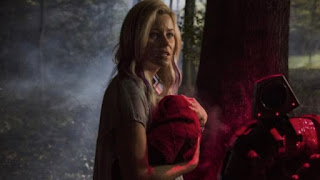 I also didn’t dislike the direction by David Yarovesky. A fave collaborator of the Gunn family, Yarovesky manages a nice balance of the dramatic aspects of BRIGHTBURN with the horror sensibilities during the second half. The film flows really well and the picture looks nice. And the special effects are nicely handled as well, making BRIGHTBURN feel like it fits within the superhero genre. Not sure what Yarovesky has directed previously, but I could see him doing more work in the genre since BRIGHTBURN is a visually pleasing film that showcases his potential for the future.

And while the concept of BRIGHTBURN is great on paper, I wish it had been better executed on screen. The characters are fine. The film does exactly what you’d expect from it, besides an ending that some people may not expect. All the beats to a story like this exist in BRIGHTBURN. But the film never does more than that, playing things safe without trying to expand on the basic idea to give BRIGHTBURN a reason to exist. Is this film a commentary on the over saturation of superhero films? Is it a film on how bullying effects young people? Is it about toxic masculinity? Is there something more to BRIGHTBURN besides being just an evil kid film?

My main issue with BRIGHTBURN is the lack of struggle between good and evil for young Brandon. Prior to his spaceship telling him his destiny once he becomes a teenager, Brandon seemed like a good kid who was going to follow the same steps that Clark Kent had in DC. But once he finds out he’s powerful and not from Earth, Brandon decides that getting what he wants is more important, even if he has to hurt and/or kill others to make that happen. This is fine and all, but where’s the internal conflict? Where’s the character study that debates nature versus nurture? Brandon is just evil because… he just is? Where’s the story then? The screenplay just feels empty without nothing meaningful to say. Brandon gets bullied in school and that could have given the journey some depth if it went anywhere. And his social awkwardness makes his crush scared of him. But that tends to just fade away as well by the final act. There are a lot of aspects that could have given some meat to the story’s bones, but the film would rather focus on a evil kid killing people in superpowered ways than give us something to think about in terms of an interesting story arc. It’s a shame because this had the potential to be more. Luckily, BRIGHTBURN has a cast who cares and tries to make the most of what they’re given. But you’re just left feeling like there’s something missing by the end of it. 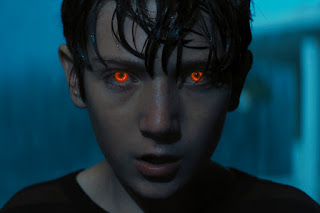 BRIGHTBURN was one of the films I was most excited about during the 2019 Summer Movie season. The film has good horror moments, with some cringe-worthy gore at times. The acting is solid all around, especially by Elizabeth Banks and Jackson A. Dunn. And the direction is well done, with a nice pace and cool special effects handled well. And while this “Evil Superman” story contains all the beats and tropes needed to tell the story efficiently on a superficial level, there’s nothing really underneath to give BRIGHTBURN any depth. It’s a shame because it could have been an interesting commentary on the superhero genre, or just a neat character study on an alien being who struggles with his destiny versus the morals he was entrusted with from his parents. The film doesn’t burn as bright as it should have, but it’s worth at least a watch if an “Elseworlds” or “What If?” type of Superman story interests you.