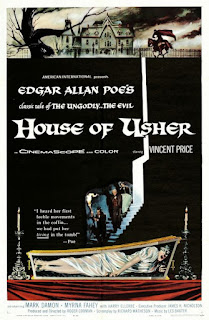 After a long journey, Philip arrives at the Usher mansion seeking his loved one, Madeline. Upon arriving, however, he discovers that Madeline and her brother Roderick Usher have been afflicted with a mysterious malady: Roderick’s senses have become painfully acute, while Madeline has become catatonic. That evening, Roderick tells his guest of an old Usher family curse: any time there has been more than one Usher child, all of the siblings have gone insane and died horrible deaths. As the days wear on, the effects of the curse reach their terrifying climax.

You can’t do the Halloween season without Vincent Price, which is why I decided to watch something of his that I hadn’t seen in a long while. 1960’s HOUSE OF USHER was the first of Roger Corman’s films starring Vincent Price based on literature by Edgar Allan Poe. A prolific B-movie producer prior to this, HOUSE OF USHER is really the start of Corman receiving tons of accolades and respect as a filmmaker, as he treats the source material seriously and pretty faithfully.

Corman was inspired by Hammer Films’ success with their CURSE OF FRANKENSTEIN and HORROR OF DRACULA films, as well as Mario Bava’s BLACK SUNDAY of the same year. Wanting to come near to that quality, Corman begged American International Pictures for a sizable budget and the ability to film in color, as all previously produced films were in black and white. While AIP denied this request at first since they were in the monster business, Corman had to convince the studio that the house where the story takes place was the villain of the story. Seeing that Richard Matheson would co-write the story and Vincent Price [THE horror star at the time] would be attached, AIP took a gamble that would eventually pay off for everyone involved.

Adapting Poe’s “The Fall of the House of Usher”, one of the author’s most famous stories, would be quite the task for Corman and Matheson. As many of Poe’s readers know, a lot of Poe’s works are in first person and lack any sort of backstory, focused on the present and how the narrator feels within that time frame. Other adaptations were written for stage and film prior to Corman’s project, but I feel the 1960 film is its strongest adaptation that fleshes out Poe’s work in the visual way that was intended. The narrator of the story is finally given a name [Philip Winthrop]. Roderick and Madeline Usher are now siblings instead of lovers. And since the Poe story has no real internal conflict, Matheson creates a sort of struggle between the two men over Madeline. Winthrop is now Madeline’s fiancee, who wants to take Madeline out of this mansion that’s apparently cursed to anyone named Usher. Roderick wants to get rid of Winthrop to keep Madeline in the home to protect her as long as possible, creating a weird incestuous relationship between the siblings that’s strongly implied. The rest of Poe’s story plays out as written, with the house being the antagonist that will destroy anyone connected to the Usher bloodline due to past crimes that created some sort of sentient evil as punishment for future descendants. It’s a pretty simple story that is greatly helped by the soap opera between the three main characters, due to Matheson fleshing them out and creating a more thrilling scenario that will still lead to the same unhappy ending for everyone involved.

Corman directs the film really well, as the stage-like set design creates an intimate feel for HOUSE OF USHER to its benefit. The look of the film and the way it’s filmed does resemble that of a Hammer film, obviously showing Corman’s inspiration on this Poe adaptation. Corman creates a gloomy mood throughout the film, simmering until the movie reaches its thrilling final act where the house begins to physically get revenge on the characters as it crumbles down and fire engulfs the entire scene. Special mention must go to cinematographer Floyd Crosby for making the sets look grander and richer than they probably were. And to production designer Daniel Haller for capturing the look of the Usher House, with its gothic and Victorian creepiness surrounded by dead looking trees and fog. It’s a great looking flick for 1960’s horror. Money well spent.

The cast is fine as well. Mark Damon comes across as a bit bland and dry at times as Winthrop, although his portrayal of annoyance at times does give the actor a bit of a personality that’s much needed. Myrna Fahey is pretty stoic most of the time as well, although she gets to have more fun during the film’s final moments in an energetic turn in her character of Madeline.

But seriously, HOUSE OF USHER belongs to one man and one man only - Vincent Price. Better known for his campy and melodramatic performances, Price does a 180 and portrays a more subtle and nuanced performance as Roderick. Instead of hamming it up to entertain the audience, Price allows himself to brood within his role, giving a more tortured and somewhat obsessive performance that makes you question his character. Is Roderick wanting to get rid of Winthrop to protect him from Madeline’s curse within the house? Is Roderick trying to eliminate the competition because he’s in love with his own sister? Is it both? We’re never really sure because Price plays it close to the vest. And thankfully Price is onscreen for much of the film’s runtime because his charisma overshadows the rest of the cast and carries the film to its success. It’s no surprise he would appear in more of these Poe adaptations because he’s the best part about them. The man is an icon for a reason.

1960’s HOUSE OF USHER doesn’t reinvent the wheel, even for its time. But it’s still a great Edgar Allan Poe adaptation that proves Roger Corman’s strength as a horror filmmaker and businessman, as well as a memorable and charismatic performance by horror icon Vincent Price in one of his finest roles. The changes made to the adaptation’s narrative strengthen the story, adding in much needed internal conflict that was missing in Poe’s original work. Corman’s inspired direction to make an American horror film to resemble a Hammer Film works to the film’s favor, as the film carries a mood of dread from beginning to end through its beautifully Gothic set locations. As for the cast, Price overshadows everyone else on screen with him, even though the other actors are decent, if not a bit dry and bland compared to the horror icon. Still, HOUSE OF USHER is a recommended watch during the Halloween season - as Corman, Price and Poe make for a wonderful combination this time of year.