The Bird With the Crystal Plumage (1970) 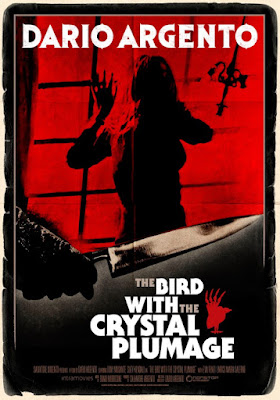 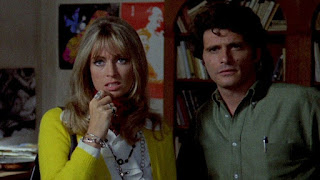 I couldn’t tell you the last time I sat down and watched 1970’s THE BIRD WITH THE CRYSTAL PLUMAGE. When it comes to legendary Italian director Dario Argento, I tend to go to my favorites like 1975’s DEEP RED, 1977’s SUSPIRIA, 1982’s TENEBRAE, 1985’s PHENOMENA and 1986’s OPERA if I need an Argento fix. But taking the time out to watch Argento’s directorial debut, I feel kind of bad for dismissing THE BIRD WITH THE CRYSTAL PLUMAGE for so long. It’s not one of my favorites in his filmography, but it’s a solid start for a director who would quickly find his stride for much of the 1970s and 1980s.
While not the first giallo film made, THE BIRD WITH THE CRYSTAL PLUMAGE helped inspire other giallo movies that would follow due to how successful its narrative structure is. Unlike later Argento giallo films where situations would get a bit more elaborate and convoluted at times, THE BIRD WITH THE CRYSTAL PLUMAGE is a fairly straightforward, and pretty predictable, affair. Really an adaptation of Frederic Brown’s novel Screaming Mimi, the film is more plot driven than focused on visual style. The characters and the police procedural/investigation fuels much of the film, as the movie focuses on writer hero/witness Sam as she helps the police figure out the identity of the film’s killer, while his girlfriend Julia doesn’t really want anything to do with it and just wants Sam to focus on her instead. Sam struggles with his memories of the event he witnesses early in the film while being harassed by cops, goons and even the killer themself who mocks him and the police for not figuring it all out sooner.
THE BIRD WITH THE CRYSTAL PLUMAGE is really told through Sam’s point-of-view, as he’s an unreliable narrator of sorts as he tries to piece together the mystery as his memories slowly continue to change throughout the film. While some of the secondary characters may be a bit too eccentric for this type of film, which makes the movie campier and cheesier than it ought to be at times, the main players are all likable and interesting enough for the audience to care and follow them from beginning to end. Later Argento films would have crazier plots that end up being more memorable in the end, but the simple nature of his debut is refreshing as it’s nice to see where his style and vision started from and how much it grew from here.

While THE BIRD WITH THE CRYSTAL PLUMAGE inspired later giallo films, the film was heavily inspired by some of Mario Bava’s giallo films, as well as certain Alfred Hitchcock works. While this film takes influence from Bava’s giallo classics like BLOOD AND BLACK LACE and THE GIRL WHO KNEW TOO MUCH, it’s really obvious how big of a fan Argento was of Hitchcock. A scene where Sam witnesses a crime while trapped between two windows is a slight variation of REAR WINDOW, as Sam is paralyzed between the two glass panes and can only watch the crime unfold. And there are several moments where PSYCHO’s influence is in full effect. One murder takes place within a small room, where the killer stabs their victim multiple times. The way it’s directed is how Hitchcock directed the classic shower scene, with jarring edits between the victim and the weapon that gives the illusion that what’s going on looks gorier and more brutal than it actually is. The ending, which explains the killer’s reasoning for their murder spree, also seems similiar to the final moments of PSYCHO as well. Rewatching this not only made me realize how much Argento was inspired by other directors, but how directors later on were inspired by this movie. It’s hard not to see certain scenes and shots play out in the film and not see Brian DePalma’s DRESSED TO KILL or BLOW OUT, which were released a decade later. It’s pretty cool to see.
Speaking of Argento, his direction is pretty great even at the beginning of his filmography. While he would get more inventive in terms of shots, the use of mise-en-scene and the use of colors, THE BIRD WITH THE CRYSTAL PLUMAGE shows that Argento knows what he was doing behind the camera to visually tell his story. The location shots are beautiful. The set pieces are visualized well, adding atmosphere to the film. While tame compared to later films, the murder sequences are shot well and have enough tension to be effective despite the lack of gore. I love the use of shadows and light, in particular to one certain scene where the film is shot just in candlelight to beautiful effect. Argento proved to be a confident filmmaker right from the start, only getting better as he made more films. The film does everything a standard giallo film ought to do, which makes the direction a success.

The acting is tough to judge considering the version I watched was dubbed. Some of the voices, especially for the supporting characters, sounded really campy and cheesy - almost as if they belonged in a spoof comedy rather than a horror film. But the main actors do well in their roles. In particular, Tony Musante is pretty good as the lead Sam Dalmas. He has movie star looks and crafts a likable hero we want to follow and root for. He’s not the most dynamic actor, but he does enough to get by. Suzy Kendall is also quite good as Julia, having good moments of distress in the film’s final act. Plus she’s quite fetching on the eyes. Enrico Maria Salerno does well as the film’s lead inspector, continuing the horror trope of a police officer not being capable of his job, letting someone random do the work for him. But he’s another likable actor who has a nice rapport with Musante, making their on-screen dynamic work. I think Argento’s casts would get more interesting later on, with memorable actors getting to work with better material and crazier set pieces. But for a first outing, the actors set the precedence well.
And I can’t end the film without talking about Ennio Morricone’s interesting score that sounds like a haunting lullaby. The “la-la-la’s” vary in different scenes, but it oddly captures the tone of the film well. Nowhere close to my favorite Ennio Morricone film score but it does it job.
THE FINAL HOWL

Dario Argento’s 1970 directorial debut, THE BIRD WITH THE CRYSTAL PLUMAGE, is not top-tier Argento for me. But it’s definitely high second-tier, as it’s refreshingly plot driven with a standard giallo that ends up being more predictable than his later, somewhat convoluted, mysteries would end up becoming. With plot and visual elements taken from previous Alfred Hitchcock and Mario Bava thrillers, Argento crafts a whodunit that’s a fun watch due to likable characters, neat set pieces and a resolution that puts the unreliable narrator motif to great use. While nowhere as stylish or as gory as later films would be, Argento still provides interesting visuals and shot scales that show how much more confident he would be as a filmmaker during his peak period in the genre. The actors are good in their roles, even if the English dubbing can be more campy than one would like at times. THE BIRD WITH THE CRYSTAL PLUMAGE is a solid giallo debut from a master of horror who would improve upon his work here to provide horror audiences more memorable and crazier moments to come.
SCORE