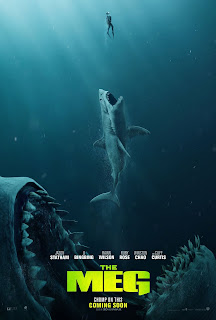 PLOT (from IMDB)
After escaping an attack by what he claims was a 70-foot shark, Jonas Taylor (Jason Statham) must confront his fears to save those trapped in a sunken submersible.

You know I love me some shark movies during the summertime. Add in Jason Statham, and you got me buying a ticket to see THE MEG - a $100 million blockbuster that’s aiming to continue the successful theatrical summer shark trend from the last few years. Going into it, I wasn’t expecting anything of the caliber of 1975’s JAWS, which will probably always be the ultimate killer shark film and rightfully so since it still holds up today. But I figured - you have Statham vs a giant CGI shark. It could be on the same level as 1978’s JAWS 2, or 1999’s DEEP BLUE SEA, or even 2002’s schlock-classic SHARK ATTACK 3: MEGALODON. Unfortunately, studio interference got in the way of THE MEG, turning an R-rated script into a PG-13 one with no gore and an uneven tone that sometimes makes you wonder if the producers knew whether to make the film a serious one, or a future campy cult classic. When you main star even criticizes that this wasn’t the film he had signed up for, red flags appear.

What works in THE MEG? Obviously Jason Statham, who is a better actor and screen presence that many don’t give him credit for. He’s really the main reason to watch THE MEG, as he’s the most likable character as Jonas Taylor - playing the role as a total bad-ass who does everything he can to save the majority of the cast [even if he has to sacrifice the few to do it]. You can tell Statham knows what film he signed up for, playing it for laughs and for thrills whenever the film calls for it. Honestly, I kinda wish THE MEG was just Jason Statham vs. a shark for 90 minutes. Believe me, the man would have easily made that work because he’s that damn good. I just wish he was in a better movie. Or at least a better cut of the same movie, in this case.

The rest of the actors are fine in their roles, which are nothing more than stock characters you’d expect in a film like this. I liked Li Bingbing as Suyin, the main heroine and obvious love interest for Jonas. I thought she and Statham had nice chemistry, especially when you add in the adorable Shuya Sophia Cai as Meiying in the mix. Rainn Wilson was both equally funny and annoying as Jack Morris, the shady billionaire investor who had his own motivations with this entire Meg situation. I feel there was a lot of his character arc that was cut out of the film, but he was fine. I also thought Page Kennedy had some great comedic moments as well as DJ. The cast was fine and seemed invested in what they were filming, which is great for a movie like this.

The other great stuff involves the presentation. Despite cutting a chunk out of the film to please a wider audience [thanks studio interference…], Jon Turteltaub directed a great looking film that flowed extremely well for its running time. The pacing sacrificed a lot of character development, but THE MEG never bores you since there’s always something happening. The CGI surprised me with how well it looked on screen. I was honestly expecting SyFy level quality, but you can tell THE MEG had a huge budget and it was used well. I thought the film looked beautiful at times, especially during many of the underwater scenes. There was only one issue of bad CGI near the end, but the rest looked great. The set-pieces looked believable and I enjoyed the shots of the different locations the cast traveled to. Plus, THE MEG had several moments of suspense and tension that worked. I wish there were more of them and they were stretched out more at times, but at least Turteltaub put them in. I honestly want to see the uncut version he filmed, because he seemed disappointed in the theatrical version. The film is already 111 minutes. I can’t even imagine what was on the cutting room floor.

Well I take that back. The blood and gore was on the cutting room floor. I get that the studios felt that if they cut out certain aspects of the film, the release would be able to cater to a wider audience and bring in more money. That’s fine and I understand it as a business move. But when the SyFy shark films have more blood and gore than your theatrical big budget release, I begin to question that move. JAWS, which was released over 40 years ago, has more violence and scares than THE MEG does. We get explosions, some blood from chewed up animals, and even a limb floating in the water. But the shark barely kills anyone, not like it would matter anyway because we never see it. The violence is cut away. It’s a killer shark movie!! How can there not be a level of fear in terms of the violence? I was really disappointed in that. Supposedly the original cut had silly and campy death scenes. I hope that version is released on Blu-Ray so I can be thrilled by something.

And I mentioned how the pacing affected the character development. There’s nothing wrong with having archetypes in your film, especially in a shark movie like this. But I felt like the story was rushed at times. I wanted to see Jonas struggle more with his past actions and how it affected his current situation. I wanted to know about Jack Morris’ reasoning for investing in Mana One and his true purpose for it before the Meg appeared. And what was up with that ex-wife sub-plot that didn’t really go anywhere or make any sort of impact for the story? It could have been left out and it wouldn’t have changed much. I’m not expecting Oscar-caliber screenwriting, but when you have a lot of characters and most of them survive until the end, you have to provide the audience with some answers to their questions. When I know more about the characters in a SHARKNADO film, we have a problem.

I also found the tone to be uneven. When THE MEG made fun of itself and got a bit goofy, it was a ton of fun to watch. But then the film would take itself real serious, making me wonder what the director was going for here. I’m sure the studio interfering had a major role in that, as I read that the original version of the script was to have a tone similar to PIRAHNA 3-D. Hey studios, let filmmakers do their thing whether it’s successful or not. Glad you have a hit here, but you’d probably would have made more money if the film was just let be for what it was. 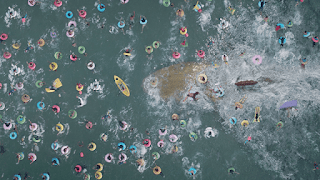 Originally I was going to give THE MEG a more negative review, as it disappointed me in terms of not being fun enough to make a lasting impression on me. But as I thought about it, the film does have some technical merit going for it, with beautiful cinematography and a nice flow [even if it sacrifices character development]. And the actors seem to be having fun, with Jason Statham being the awesome badass that he is. He’s honestly the best part of THE MEG. There’s not enough shark attacks or memorable moments that put the film on the level of a DEEP BLUE SEA. But it’s definitely above most SyFy schlock and a decent two hours to waste if you need a shark fix at the theater. Slight recommendation, only for the fact that there was a great film in here somewhere that never reached its full potential.