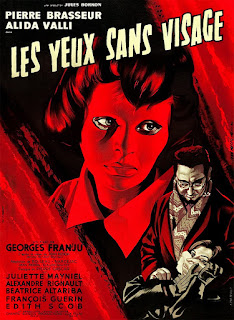 Dr. Génessier is riddled with guilt after an accident that he caused disfigures the face of his daughter, the once beautiful Christiane, who outsiders believe is dead. Dr. Génessier, along with accomplice and laboratory assistant Louise, kidnaps young women and brings them to the Génessier mansion. After rendering his victims unconscious, Dr. Génessier removes their faces and attempts to graft them onto Christiane’s. 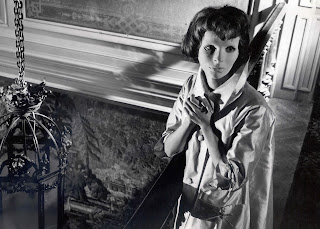 A classic piece of French horror, 1960’s EYES WITHOUT A FACE is not usually spoken of in the same breath as other films of the time, such as PSYCHO, DIABOLIQUE or even PEEPING TOM. But the film has inspired just as many films as the previously mentioned films, including a badass Billy Idol song of the same name in the 1980s. You also wouldn’t have had 1997’s FACE/OFF, as well as Jess Franco’s THE AWFUL DR. ORLOF, which makes EYES WITHOUT A FACE essential horror watching.

Inspired by Mary Shelley’s Frankenstein, EYES WITHOUT A FACE focuses on Dr. Génessier who is guilt ridden over an accident that has disfigured his daughter’s face terribly. Christiane, who had a whole life including a fiancee, is considered dead and kept hidden inside of her father’s mansion until a successful face transplant can be done. Unfortunately, Génessier’s idea is an unproven and experimental one, meaning the only way he can figure it out properly is by kidnapping women [with the help of his assistant Louise] who look like his daughter, drug them, and then peel their faces off and graft them onto Christiane, hoping the skin doesn’t rot on his daughter’s face. These acts, unfortunately, gain the attention of the local police who believe they have a serial killer on their hands. EYES WITHOUT A FACE wears many different hats. It’s a body horror film before that really became a thing. It’s a police procedural. It’s also a family drama and haunted house story.

The real tragedy comes from the facial transplants, as it affects many people involved in the process. The most obvious ones are the victims, who are charmed by Louise before getting drugged by her and having their faces surgically removed in a grotesque way. Dr. Génessier doesn’t care about these women, bandaging their skinless faces and allowing them to wake up to realize what has happened to them. Judging by the narrative, these victims are either murdered or end up killing themselves out of fear and emotional pain. 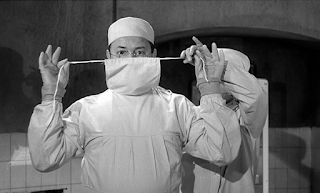 Génessier is both a villain and a victim because his guilt over what has happened to Christiane has turned him from a father who wants to help his daughter look beautiful again, to a man who who sees that a successful facial graft will make him the most successful surgeon in the world, meaning big bucks. He’s too obsessed with greed and pride to realize that his daughter is suffering no matter what. The experiments on her are taking their toll mentally and emotionally. She’s convinced that faking her death is best since she’s not beautiful anymore, forcing her to move around her mansion and the exteriors as some sort of ghost who is trying to release herself out of Limbo. And even if the graft is successful, how does she explain to her fiancee and her friends that she looks like one of the girls who was found dead without getting herself and her father in trouble? How could she have a normal life wearing a dead woman’s face? Each one of the characters long for something, which goes awry once all this longing intersects with all the others.

Having not watched EYES WITHOUT A FACE in a while, I forgot how gruesome the facial surgery and transplant was. For a film from 1960, this must have horrified audiences to see this type of body horror play out on screens. Director Georges Franju really takes his time with the scene, letting us see exactly what’s playing out before transitioning into another scene as the skin is being peeled off of the victim’s face. It’s a great special effect for its time and shows what an influence this film has had on later filmmakers, such as David Cronenberg and Stuart Gordon. 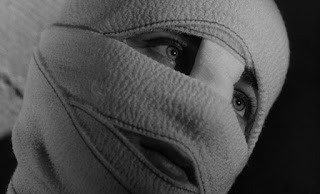 Speaking of Franju, he does an impeccable job creating a thick layer of mood and atmosphere in this film. Nothing in this film feels hopeful or cheerful. There’s always a feeling of dread and bleakness surrounding the characters and the location they’re in. Eugen Shuftan's fantastic cinematography captures a beautiful, clean and haunting picture that you’re just captivated looking at. Even the film’s “hopeful” ending seems almost depressing, considering a happy conclusion to a certain character’s story doesn’t seem as likely. I also find it interesting that while the police procedural builds tension and suspense as the film nears its end, both filmmakers are more focused on the macabre experiments and Christiane’s lurking throughout her home as some uneasy spirit trying to find a way out. The direction is also complimented by the musical score, which sounds like it could be from a carnival at times, adding to the disturbing nature of the film’s narrative.

The actors all play their parts wonderfully. But the two standouts are Pierre Brasseur as Doctor Génessier and Edith Scob as Christiane Génessier. Brasseur plays his Doctor as stoic and cold to everyone. Even when his character is trying to show affection to Louise and Christiane, it still comes off as icy, making one unsure what his true feelings and intentions are. I also love his acting when things start falling apart for his character, as he keeps it cool on the surface but you know the dam is ready to burst internally. Scob doesn’t get a lot of dialogue or even a whole lot to do compared to other actors. But she has an alluring presence about her whenever she appears on screen, especially through her body language and her big expressive eyes. You can see the pain, confusion and torment in her character, making her captivating to watch. 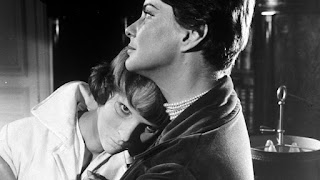 A film probably ahead of its time, EYES WITHOUT A FACE is a French horror classic due to its subtlety and its poetic narrative that hits on greed, vanity, and the longing need to feel seen and respected despite the consequences that’ll follow. The film doesn’t get mentioned a whole lot in modern horror circles, despite the influence it has left on slasher films [the main character hidden under a blank white mask], body horror films [the graphic face transplant scene that probably scarred many audiences back in 1960] and even a hit song for Billy Idol. Director Georges Franju and cinematographer Eugen Shuftan capture a mood and atmosphere that captures a feeling of dread and unhappiness throughout, building tension and suspense as the characters get too deep in their selfish crimes, leaving only victims [themselves included] in their wake. The actors are all wonderful, but Pierre Brasseur as the stoic and cold Doctor Génessier and Edith Scob as his haunting and tragic daughter Christiane stand out and carry this masterpiece. In particular Scob, who doesn’t say or do much but is such a haunting presence through her body language, that you’re just captivated by her every time she appears. EYES WITHOUT A FACE is a hauntingly beautiful movie that will stay with you long after it’s over.