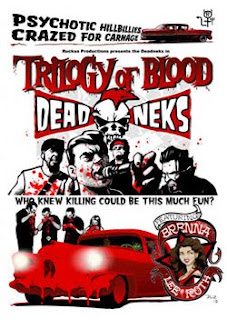 
PLOT
Three sexy girls from the city (Tish Gardner, Brenna Lee Roth, and Elyse Girl) drive through the backwoods of Virginia. They see a Hitchhiker (Joey Broy) and pick him up. He invites them to his home where he's having a barbecue and a concert where he's the lead singer of the Deadneks. Unfortunately, the girls realize too late that the barbecue isn't the standard burgers and hot dogs kind. In fact, they're the main course.

REVIEW
TRILOGY OF BLOOD is a 27-minute short film by Ruckus Productions that's really a homage to Herschel Gordon Lewis films like TWO THOUSAND MANIACS and BLOOD FEAST. It's hard to really review this film since it's really a promotion of the Deadneks 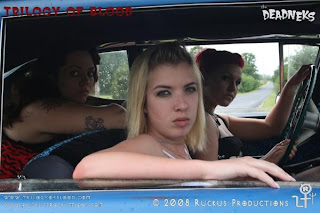 music hidden within a $62 dollar budget [that's the real budget]. Luckily, the music of the Deadneks is good [think Reverend Horton Heat with an angrier tone] and it helps the tone of the film.

The story is pretty simple - girls pick up a hitchhiker who tricks them into being food for himself and his friends. You don't get much character development or any real connection of who these characters are, especially the victims. Even in a 27-minute film, you should at least have some semblance of that. But the film isn't really about that. It's about watching these Deadneks hammering people in the head, cutting out eyeballs, slicing throats, and burying some axes in various craniums before eating them. For cheap, the gore looks better than you'd expect. And there are some sex scenes - from lesbian cousins, to a dude who likes to choke girls while they ride him, to some dude who enjoys his tractor a bit too much. I thought it was funny stuff because this whole universe is so freakin' odd! There's female and male nudity, so this film is definitely not for children.

The direction hides the limitations of the budget as well as they can. The murders look good due to the editing [which is a bit iffy at times] and faux-grain look on the film print is cool but I found it distracting at times. It's also a bit out o 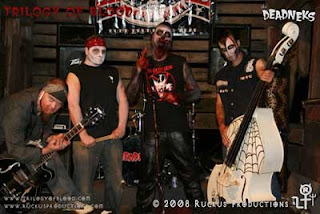 f focus at times and it has a sepia tint, which help create that grindhouse feel. Like I said, the film is really meant to showcase the Deadneks band, and the direction definitely does that.

The acting is okay. The main actresses [including B-movie starlet Brenna Lee Roth - who is also the daughter of Van Halen lead singer David Lee Roth] do a commendable job. The Deadneks are pretty cool as well. The actors all seemed to be having fun and that's a good thing, whether the acting is Oscar-caliber or not.

THE FINAL HOWL
TRILOGY OF BLOOD is not the greatest low budget horror film I have ever seen, but it's entertaining, bloody, and long enough to tell the story it wants to tell. The music is definitely the highlight of the film, which is nothing more than a long-form music video with gore and sex. Don't take this film seriously and you should have a decent time with it. Now where's my tractor?