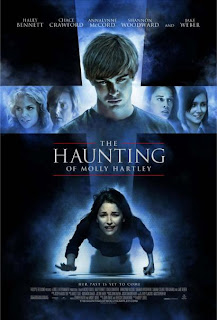 
PLOT - Molly Hartley (Haley Bennett) doesn't have the most normal of teenage life. When she was seventeen, her mother (Marin Hinkle) stabbed Molly in the chest trying to murder her - but was unsuccessful and sent to a mental institution. Her father (Jake Weber), feeling a change of environment is needed, uproots her and sends her to a very expensive private school. While the idea is to start anew, the move just makes Molly worse. While she falls for heartthrob Joseph (Chace Crawford), she has to deal with bible thumper Alexis (Shanna Collins) and Joseph's ex-girlfriend Suzie (AnnaLynne McCord). She also starts hearing voices and seeing weird things, resulting in headaches and nosebleeds. At first she's led to believe that these are symptoms of a benign tumor in her tonsils. But even after it's removed, these voices and visions grow stronger and more evil. She eventually learns that her parents made a dark deal the day she was born - something that will change her life forever.

STORY - I remember seeing the trailers for THE HA

UNTING OF MOLLY HARTLEY a few times before its limited release, thinking it resembled one of those 1970s films that involved themes such as demons, Satan, and other evil things like that. It pretty much came and went without much noise, quietly going straight to DVD and cable outlets. Watching it a few days ago for the first time, I can see why. It's 85 minutes of nothing that could cure insomnia. Really, THE HAUNTING OF MOLLY HARTLEY:

The screenplay was written by Rebecca Sonnenshine and John Travis, who were obviously inspired by older horror films like ROSEMARY'S BABY, THE OMEN, and TO THE DEVIL A DAUGHTER. Hey, if you're going to influence your script on any films, those three films are great choices. The problem is that just because you've seen those films doesn't mean you could structure a film based on those films and it would still be on the level of those movies. The basic outline of the intended plot sounds great, but there's no filling whatsoever to make it work.

This is a hard review to write because there's absolutely NOTHING going on with THE HAUNTING OF MOLLY HARTLEY. It wants to be a horror film for teens, but it just ends up boring the hell out of you to the point where you don't care about anything that's going on in the film. It wants to be like Gossip Girl, or 90210, but with Satanic references, but it just falls flat in every single way. What I believe was the intention with this film was to metaphorically use Molly's unwilling bond to evil [due to her desperate parents] as a way to express her coming of age from teenager to adult. As Molly grew older, the voices and visions just intensified - as if the stress of having to be a responsible adult was too much for her. This is hardly an original idea, but could make for a decent enough flick if done right. The problem is, there's no depth at all in this film. Things just happen because they're supposed to in order for the climax to "shock" audiences, which it doesn't at all.

This would have benefited greatly if any of the characters were more than one-dimensional archetypes. For a title character, I had no idea who this Molly Hartley chick was or why she was so damn haunted. She was the cliched new girl who had issues with her father, traumatized by her crazy mom, is smart, likes boys, and started having visions and hearing voices that should have grabbed my attention but didn't. Oh, and she happens to be property of the Devil, but even that seems like an afterthought because this revelation is only touched upon during the last 15 minutes of the movie. I know more about people on Facebook and Twitter that I just friended or followed in 5 minutes than I did about Molly in 85. Why should I care about this girl? And why should I care about her dilemma with creepy stuff happening to her when the film doesn't really focus too much on it unless it's meant to create the usual annoying and cheap jump scare? For those who have seen enough of these type of films, it's easy to see what's happening with her. Hell, there were so many religious themes popping up around her through supporting characters, that Molly's problems were being hammered into your skull. And supposedly, Molly was to gain much power out of this deal. I wish I could tell you what it was because the film never lets us in on it. Will she become President of the United States like Damien? Is she going to destroy the world? What's the deal? Hell if I know.

The other characters aren't great either. Joseph was the stereotypical love interest - good looking, smart, caring, and even rich. He's the perfect guy, which means he's too good to be true. Other than that, shallow as hell. Alexis was the preacher, who felt that Molly needed salvation in her life and constantly carried a Bible with her at all times. No offense to people like that, but I disliked her act immediately. A few years older and she'd be Margaret White from CARRIE. Suzie was the bitch of the school who messes with Molly because she's Joseph's ex. And that's pretty much her depth level. And Leah is the typ 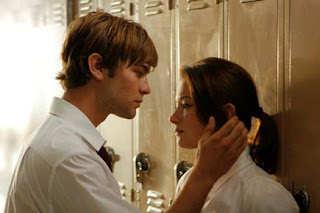 ical rebel girl who doesn't really do anything all that rebellious. Add in kooky parents and a strange guidance counselor and that's your cast of uninteresting misfits. Cliche characters that we've seen in countless other films where they were done much better than this. What a waste.

As for the ending of the film, I thought it was the most ridiculous and WTF moment for me. The climax is pretty much the revelation of what Molly is gonna have to deal with due to this pact. If you've seen the ending to ROSEMARY'S BABY, it's very similar and predictable. I felt the people involved in the revelation didn't make a whole lick of sense as there were things that conflicted with the truth. It just felt too easy. Then we get the epilogue, which really made me pull my hair out. I thought I was watching SHE'S ALL THAT - The Antichrist Version or something. I didn't get the tone. Is this a horror film or a teen comedy? Did I miss the jump here? If the film had to go that route, fine. But it was just so bizarre! God, the script was fuckin' terrible...

DIRECTION - In his first director's role, Mickey Liddell can move and shoot a camera technically. But direct this type of film? Absolutely not. While the picture does look nice and it's put together soundly, everything else is a misfire. I swear, I have never seen a horror film that's so concerned with adding a jump scare every ten minutes. Now, I can expect a horror film doing this more than once in a film, but in THE HAUNTING OF MOLLY HARTLEY, it just kept reoccurring to the point where even mail being shoved through the slit of a front door is expected to make people jump. Really? There's also no scares, tension, suspense - nothing. The film doesn't know what it wants to be. Is it a teen drama? Is it a teen horror film? Is it meant to put me to sleep? I have no clue. Even the use of CGI is lame. The only time where there's an attempt to be creepy is during this emergency baptism scene that's predictable as hell, but at least I saw Liddell trying for something somewhat interesting. But nothing else really comes close to that. I believe Liddell's main job is as an executive producer. I hope he didn't quit it. Liddell was the wrong person to direct this.

EDGE FACTOR - THE HAUNTING OF MOLLY HARTLEY is PG-13. It doesn't mean it can't be scary or edgy, yet obviously the filmmakers thought otherwise. There's no sexual situations or nudity. The language is pretty tame. And the violence is mostly off-screen besides someone falling over the bannister of a flight of stairs and a drowning. Nothing to really get excited about here.

ACTING - Probably the saving grace of the film. The acting isn't of high quality, but at least it's decent. Haley Bennett is cute and tries hard to make us care for Molly Hartley. Her fear was somewhat convincing at times, but the dialogue she had to utter was just bland as hell. I wish she had better material to work with. Chace Crawford of Gossip Girl does alright as the love interest, Joseph. He doesn't really do much but look pretty. I guess he succeeds. Jake Weber tries hard too, but he's just alright. AnnaLynne McCord looks bored as hell, but she plays a great bitch. But you could watch 90210 or her episodes of Nip/Tuck for that. Shanna Collins was decent as the religious Alexis. Didn't like her character but she did the best she could with what she was given. I think the best actress of the film was Shannon Marie Woodward, who played rebel girl Leah. While it's a cliche role and performance, at least Woodward tries to give this one-dimensional character some energy and life that's greatly needed in the film. I honestly wish the film had focused more on her.

THE FINAL HOWL
THE HAUNTING OF MOLLY HARTLEY is a piec 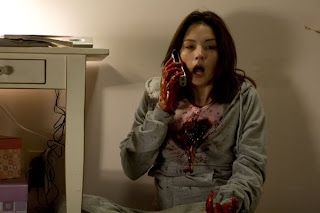 e of crap that should be avoided unless you want to bore yourself to death for 85 minutes. If it wasn't for the acting, this film would be a total BOMB. But the movie is the equivalent of a jelly doughnut without the damn jelly - no flavor, even though all the elements are in place for a tasty treat. I'm sending THE HAUNTING OF MOLLY HARTLEY to the WTF? Vault where it can strike a deal with me to be released on its 18th year inside. But first it'll have to...