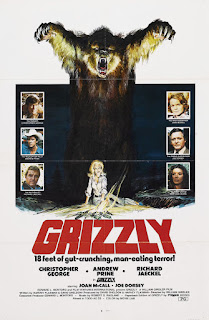 You have to give it to Steven Spielberg and Peter Benchley - they indirectly influenced a lot of studios and producers after the blockbuster success of their 1975 film JAWS. Even today, we have channels dedicated to Shark Weeks and SHARKNADO films, while the box office is thriving on another shark film called THE MEG. The “animal-run-amok” sub-genre of B-movie horror films have crafted some memorable, and absolutely terrible, films and TV programs that surprisingly have stood the test of time in a pop culture sense.

One of the more familiar films of the sub-genre happens to be one of the first filmed after the release of JAWS - 1976’s GRIZZLY. Replace the beach with a forest setting and a giant shark with a giant bear, and you got a cult favorite that has been RiffTrax’d and even spawned an unreleased sequel [although you can find footage of that online]. GRIZZLY doesn’t compare to the quality of JAWS, or even other “animal-run-amok” films that have been released before or since. But it manages to be a decently fun time for a rip-off.

PLOT
Campers and park rangers are being murdered by a giant grizzly bear in Yellowstone National Park. Ranger Michael Kelly (Christopher George) is worried about the future of the park, wanting it shut down to protect citizens while his squad can find and hunt down the bear. However, the director of the park (Joe Dorsey) won’t hear any of it - instead hiring untrained hunters to hunt down the bear. This just creates more problems as the hunters murder anything that moves, while the bear defends himself and goes after them. Realizing that the director doesn’t care about the park, using the publicity to gain more visitors, Kelly and his crew decide that they’re the only ones who can stop this menace once and for all.

Calling GRIZZLY “JAWS with claws” is pretty accurate, as producers/writers Harvey Flaxman and David Sheldon pretty much used the same template that made the before mentioned film a success. Inspired by encountering a bear during a camping trip, Flaxman thought it would be a neat idea to replace a shark with a grizzly bear to capture the same effect. William Girdler, best known for his 1974 EXORCIST clone ABBY at the time, decided he would direct the JAWS clone with a $750,000 budget. With a $39 million box office gross, GRIZZLY managed to be a big success for Columbia Pictures and Film Ventures International. Unfortunately, GRIZZLY just highlights the fact further that JAWS is the King of Animal-Run-Amok films even after all these years later.

It’s surprising Spielberg and Benchley didn’t sue anyone involved with GRIZZLY’s production, unlike what happened with 1981’s GREAT WHITE. GRIZZLY feels like Flaxman and Sheldon took JAWS’ script, changed names and settings, and decided to replace a mechanical shark with stock footage of an 11-foot grizzly bear. The similarities aren’t even subtle either. Park Ranger Michael Kelly is obvious Chief Martin Brody. Helicopter pilot Don Stober is this film’s Quint. Naturalist Arthur Scott is Matt Hooper. Greedy park director Charley Kittridge is Mayor Larry Vaughn. And the shark has been replaced by a bear. We also have a female photographer named Allison who is, I guess, Ellen Brody since she and Kelly share a flirtatious relationship. Even the plot points are the same. Animal kills people. The rangers want to shut down the area to protect the citizens from the threat, but the authority figure refuses for greed/publicity purposes. The animal gets more violent, leaving the three heroes to stop the threat themselves until an explosion conclusion. Unless you prefer bears to sharks, you’re better off watching a much better movie.

It doesn’t help when the characters aren’t as fleshed out as the ones in JAWS. They’re all familiar archetypes, all playing their token roles well enough to move the story along. But you don’t really know much about any of these people but superficial aspects of their personalities. Even the flirtatious angle between Kelly and Allison doesn’t really go anywhere, nor do they have much chemistry for anyone to care. Even the trio of Kelly, Stober, and Scott don’t connect as a unit as much as one would want. They all do the right thing in trying to help each other contain this bear, but you never get the sense that they have a friendship bond that makes you believe these three would unite over a threat like this. And Kittridge is your typical tycoon villain who eventually sees the error of his ways, without much fanfare or development. The story is written well enough for a rip-off, but it never tries to be anything other than that. Nor it tries to bring anything new to the table for it to be memorable.

I think the most interesting part of GRIZZLY’s screenplay is how it resembles a slasher film before the term was even used. Even though JAWS did use first person point-of-view shots for the villain, GRIZZLY uses this tactic more frequently due to its much smaller budget. We never see the bear for half the film, instead seeing bear claws attack helpless victims as its travels through the forest. There’s always a looming threat throughout the film, as people are murdered - including some of the main characters. Instead of playing like a survivalist film like JAWS, GRIZZLY is more like a porto-slasher and it works for the movie.

Speaking of the bear, the low budget doesn’t allow the creation of a mechanical bear that could attack the actors on command. So instead, we get a lot of stock footage of a bear named Teddy roaming around - looking bigger due to close-up shots. And whenever the bear attacks, some guy wearing bear paws claws at the victims and mauls them. I’ve seen worse in films of this ilk. The better special effects come with the gore effects, which are quite violent for 1976. We see blood splatter, limbs and body parts being ripped apart, and even structures getting destroyed that end up killing people. Yes, the use of mannequins aren’t hidden as well as they should be. But what can you do for a film that cost less than a million to make? It’s done well for a modest budget and I was pretty impressed.

The direction by William Girdler is fine for a B-movie like GRIZZLY. The location shots for the park were filmed in Clayton, Georgia and look very nice. The use of the park is done well and matches well with the stock footage of the bear. The film flows decently well, even though it does drag a bit during scenes that don’t involve the bear. Like I mention, the special effects are done well and give GRIZZLY an oomph it needs. I do wish the film was a bit more fun, in terms of being it more exciting or even campier [no pun intended]. JAWS managed to blend drama and comedy really well, but JAWS was ultimately a serious movie. GRIZZLY takes itself seriously, when it honestly should be a bit more silly. The story and the characters don’t really lend to a dramatic “killer animal” movie, making GRIZZLY feel uneven in tone. I’m not saying Girdler should have directed a comedy, but a bit more levity would be been nice. Girdler’s future project, 1977’s DAY OF THE ANIMALS, manages to be a lot better because it knows how to blend the serious with the camp. It also has a stronger script and more memorable moments. GRIZZLY doesn’t contain these elements, so a different tone could have hid that. I will say that the ending is probably the best part in terms of presentation. I won’t spoil anything, but it involves Christopher George, a bear, and a rocket launcher. The effects seem to have been lifted from the Batman TV show from the 1960s. I actually laughed out loud, which made me wish Girdler could have added more scenes like that one. 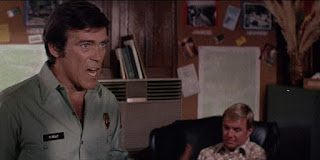 The acting in GRIZZLY is okay. Christopher George is fine as Ranger Kelly, trying to do his best Roy Scheider impression as best as he can. He doesn’t come close, but he’s a reliable presence in these B-movies and carries the film well enough. Andrew Pine is good as Stober, but fares better when he doesn’t try to be Robert Shaw’s Quint. Richard Jaeckel is a bit better as Scott, as he plays the “Matt Hooper” copy better than expected. I think he had the most energy of the three actors and I liked him the best. The other actors play their roles as if they were starring in a quality 70s TV-movie. They’re neither memorable or terrible. Special mention goes to Teddy, who looks like a really cuddly bear and was trained well in the role. Too bad he was too cute to be a vicious threat.

Not a great film, but GRIZZLY manages to be a decent watch if you’re in the mood for a “beer and popcorn” flick. The proto-slasher elements and the bear effects work, considering the film’s modest budget. And it tries to do its best while ripping off JAWS, but ends up just making you wish you were watching a much better film instead at times. Still, watching a cuddly grizzly bear murder campers is fun when it happens, and the explosive ending is one of the silliest and most hilarious endings ever in a B-movie. Not smarter than your average rip-off, but handles the bare necessities well enough to warrant a watch.