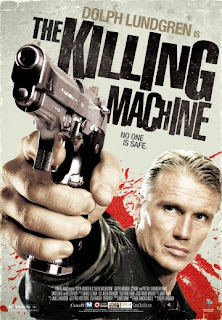 
PLOT
Edward Genn (Dolph Lundgren) is a former agent of the KGB under the codename, Icarus. Since his KGB days, Edward is now a hit man, creating enemies all over the world. His estranged wife, daughter, and current girlfriend have no idea about this life, as Edward poses as a travelling real estate investor when he's not killing people.

After doing a successful hit in Hong Kong, Edward finds out that his past has come back to haunt him. Apparently, he spared the life of a kidnapped, tortured Russian years ago during a mission. Now the Russian mob, led by Vadim (Bo Svenson) want a little payback on Edward and his unsuspecting family.

- The acting. THE KILLING MACHINE, or ICARUS as its known in the rest of the world, is a mixed bag of a film. But the acting is pretty solid here, keeping this direct-to-video feature afloat. Dolph Lundgren is one of my all time favorite 80s action superstars, and he does a fine job here in the lead role of Edward Genn. I've seen Lundgren in many films, and this is one of his better ones as he takes it very seriously. For a man his age [50-plus], he still looks great and kicks some ass. He even handles more dramatic moments well. These scenes were more of a distraction than a great addition, but Lundgren tries to make them work and I appreciate that. The guy is solid here and I'm glad he's getting more attention again due to THE EXPENDABLES.

The other actors are good as well. Stefanie von Pfetten does well as Edward's wife, Joey. Her character was a bit unbelievable, but von Pfetten grounded the performance. Samantha Ferris is great as Kerr, Edward's former ally who has a ton of connections. I wish she were in the film more, but she handled her role like a champ. Bo Svenson should have been in the film more as well, but he's great in his limited time as Vadim. Svenson seems to be having fun playing a nasty bastard. David Lewis was also very cool as Mr. Graham. Great cast. I just wish the script gave most of them more to do.

- Most of the direction. In his sixth directorial feature, Dolph Lundgren does alright behind the camera. As an action star, Lundgren knows how to capture those moments and make them memorable. Although I feel the editing could have been a bit more subtle [too much quick editing at times], I did like how some of it was shot. Lundgren does have a good grasp on what works. I thought the editing, the framing, and the composition were nice for the most part. Even though I wasn't the biggest fan of the slower, more family-oriented portions of THE KILLING MACHINE, I will say that Lundgren did shoot them nicely, even if they were a bit vanilla at times. I also liked how the flashbacks had more saturation than the present day scenes. Plus, Lundgren wanted to do a film noir type of feel, with the use of voiceover and its pace. He doesn't quite succeed with that [the way the film is shot is more THE BOURNE IDENTITY than DOUBLE INDEMNITY], but I do get a sense of what he was going for. Not the greatest direction, but far from terrible.

- The action portions. I liked the action sequences here, where Edward goes out and kills people. For me, these were the most interesting moments of THE KILLING MACHINE. Through these scenes, I felt Edward got a lot of character development through his actions, and through the characters who help him and/or betray him. While the film isn't particularly gory or bloody, there is a lot of violence here. It's mainly bullet wounds, but we do see limbs getting broken. We also get a face sliced off from lip, up. We get explosions. We get a death via pitchfork. There's some nice stuff here.

I also felt these moments really quickened the pace of THE KILLING MACHINE, and helped explore the dynamics of his relationships with his wife, daughter, and girlfriend better than the slower moments did. Seeing him in action is seeing Edward alive and in his zone. How others react to that reveal a lot. Plus the action moments elevate the tension when Edward's family is caught in the middle of this unnecessary war. A lot of the twist and turns took place during these moments, which I liked. Dolph Lundgren is an action star. And while he's done better action films, he's in his element doing these scenes. I dug it.


MISSES
- The drama portions. Unfortunately, for every action scene, there were two scenes that were made for Lifetime. These scenes involve Edward, his wife, and his daughter trying to figure each other out to be blended better as a family. We watch Edward struggle with his lies to the people he loves, which is interesting. But it feels forced compared to the action scenes, as if THE KILLING MACHINE would rather be a drama first and an action film second. There should be a balance here, but it never feels that way. It doesn't help that these portions do feel like a film noir at times, visualized by direction that's the total opposite. These scenes seem too heavy, as if Lundgren would rather concern himself about making his character a struggling family man until he's bored by it enough to move into an action scene. These moments don't intersect properly, making the film feel disjointed in tone and mood. I don't know what this film wants to be, and that's a huge problem with THE KILLING MACHINE.

I'm not saying I didn't mind the slow character development between Edward and his ex-wife. I'm glad we get to see his personal life and how being a hitman effects his world. But it seems to get in the way of story progression, as the film is still too concentrated on the set-up. It doesn't help that the ex-wife character has a boyfriend, who suffers a terrible fate, yet she sleeps with Edward right after the boyfriend's death because she's still upset about it. It doesn't feel natural and it drags the film down. Personally, I wish Edward didn't have a family. Or maybe if the villains had killed them, it would really give THE KILLING MACHINE a ton of edge and atmosphere. I get what the screenwriter and Lundgren were going for, but the two portions don't work together that well. I was bored during these moments, and I should never feel that way during an action film. It's a shame because these scenes are pretty well acted. I just wasn't invested in them because Edward had a ton of depth and these other characters were paper-thin. These dramatic, family scenes ruined the pacing and confused me on what type of film I was meant to see here. It's great they wanted to make Edward human and sympathetic. I just felt it could have been done in a more natural, and productive way.

THE KILLING MACHINE is a pretty average direct-to-video action/drama that seems to be suffering from a bit of an identity crisis. Dolph Lundgren is great onscreen, and decent behind the scenes visually. The action moments were pretty good. Yet the family drama stuff dragged the film down for me. I love drama in my action, only if its a natural fit - which isn't the case here. If you want to see a film that balances the two out well, watch TRUE LIES. Unfortunately, THE KILLING MACHINE didn't have the budget to hire a better screenwriter and a special effects team that could pull off all the stops. Still, the film is okay for what it is and I respect Lundgren's attempt with creating a modern film-noir, even if it doesn't fully succeed. If you're a Dolph Lundgren fan, check this film out. Otherwise, you're not missing much.