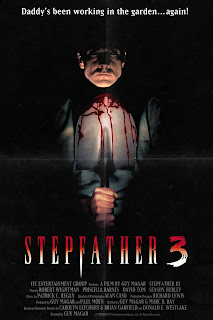 That psycho stepfather (Robert Wightman) has escaped from the insane asylum and had his face surgically altered. Now he's married again, this time to a woman (Priscilla Barnes) with a child (David Tom) in a wheelchair. He goes on a killing spree once again. 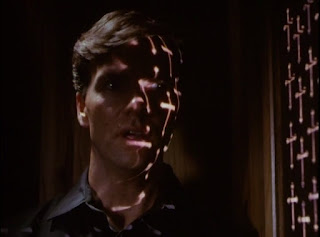 Considering it’s Father’s Day and I’ve already reviewed the rest of the series [the 1987 original, the 1989 sequel and the 2009 remake], I figured it was time to sit down and rewatch 1992’s STEPFATHER III - a TV movie sequel that went straight-to-video after losing the franchise’s star Terry O’Quinn, who refused to return for a third time. Instead of just doing an entire do-over with different characters and a new scenario, we have a straight continuation of the story after STEPFATHER II: MAKE ROOM FOR DADDY with new actors and the same template that helped the first two films gain a cult following over the years. While it’s better than the remake that was released almost two decades after it, STEPFATHER III is definitely the lesser of the three original films, even if it does have its moments here and there.

I’ll give the producers credit - having the Stepfather get plastic surgery right from the start of the film is pretty clever in explaining why our main actor is different. Most films wouldn’t even bother with that step, as they’ll just recast a role without any sort of explanation. But it actually adds something to the film and gives a couple of characters something to do in the last half of the movie when some detective work comes into play. The scene itself is directed in a very weird, but memorable, way. There’s a blue tint throughout for some reason, why real footage of plastic surgery is shown. But at least there’s an attempt to bring something new to the table despite it being a cheap TV movie sequel. 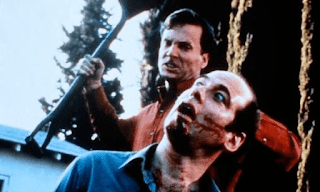 Also something new - the Stepfather having to juggle two families at once, as he tries to play daddy for two different mothers with sons. He marries into one family, but his stepson Andy doesn’t like him and finds the Stepfather slightly off. With ex-boyfriends and even baby daddies interfering with his plans, the Stepfather begins to slowly lose interest and focuses on another mother and son duo who seem to actually appreciate him and enjoy his company. Things get complicated when this new potential wife wants to move on quickly with the Stepfather, inviting him to move in with her and her son so they can quickly get married. Intent on murdering the family he married into, he’s surprised when his wife and stepson decide to give him another chance. Now he has to get rid of the other mother and son duo to maintain his happy life. Watching him go back and forth between the two families and try to keep his wife from not figuring it out is pretty fun to watch at times, especially when the two women get close due to their sons going to the same school [where the Stepfather’s wife works at]. It’s not something we’ve seen the character deal with onscreen, so it creates new drama and gives him more of a reason to start losing it. Obviously, we know it’s going to go terribly for everyone involved. But it’s still quite amusing to see.

I also appreciated the attempt to swerve the audience in making viewers confused as to who might be the Stepfather at first, even though it wasn’t successful at all. And wheelchair bound Andy has an interesting character arc. His disability is more psychosomatic than physical, due to a bad accident that traumatized him. And his obsession with solving mysteries actually plays an important role in giving the Stepfather a lot of trouble within his own household. The use of 90s computer technology in scanning things was pretty funny though.

Other than that, the narrative is pretty much the same as the previous two films for better or worse. It’s a good thing to keep the similar premise going because it worked for the previous films and that’s what the franchise is known for. But at the same time, despite some attempts to change things up a bit, the structure is a bit tired by this point. It’s one thing to watch Jason Voorhees kill camp counselors in every film because characters change, the kill sequences get more elaborate and elements are added in each film to make them feel different from the others. This franchise has this serial killer, who is a giant dork, score with these lonely women for whatever reason as if divorcees are desperate to marry anyone with a penis between their legs. And in a mix of the previous films, one son loves the Stepfather while the other one is quickly suspicious of him and thinks he could be a serial killer. But if you’ve watched one STEPFATHER movie, you’ve watched them all. 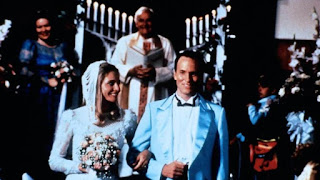 STEPFATHER III is just the Lifetime or ID version of what you’ve seen before. This is further exhibited by director Guy Magar's visual presentation. There’s nothing real flashy or stylish about the film, nor does it attempt to even build tension or suspense when it comes to the Stepfather character. I feel like Magar forgot he was making a horror movie, instead focusing more on the drama and soap opera aspect of the story, treating the film as such as it plays out like your typical TV movie. Even the death scenes are pretty tame compared to the previous two films, even though you get a couple of throat slits and stabbings. It’s too bad the film doesn’t really show the effects, kind of showing the aftermath in a PG way. The only real memorable death scene involves a wood chipper - not because you see anyone getting chopped up but because it’s the only time the film wants to be a slasher movie. We also get that strange blue tint in the first part of the film, as well as a car explosion. But otherwise, there’s not much to Magar’s direction. It’s a point-and-shoot affair that tells the tale as safely as possible.

Having not seen the film in decades, I kept thinking the acting in this film was really bad. But honestly, it’s the opposite as STEPFATHER III actually has decent actors giving it their all considering the bland material. Robert Wightman is no Terry O’Quinn, but he has a certain goofy charm about him that makes the character feel similar to the previous movies. Watching him play out the same scenarios the character did in the other films just made me appreciate O’Quinn more in the role, but Wightman brings an unintentionally funny portrayal to them that I ended up being amused by. Three’s Company’s Priscilla Barnes is better as the woman he marries, Christine. Of the three women the Stepfather got in a relationship with onscreen, Barnes felt like the strongest as she got to play multiple beats in terms of love, fear, suspicion, and fighter by the end of the movie. She elevated the film, in my opinion. David Tom is a mixed bag for me as Andy. He has moments where he’s really likable, especially during scenes with his mom, dad, his priest and while doing detective work. But then he has moments where he’s whiny and bratty that made me stop caring. He’s probably the weakest of the children characters in the franchise, but I enjoyed his character arc. And John Ingle was cool as Father Brennan, providing a sort of father figure to Andy. Nowadays, it’s kind of weird to see this young boy and priest be this close and consider the other as a best friend. But their friendship works within the narrative, as they play partners-in-crime in trying to figure out what the Stepfather is really up to. We also get a cameo from Christa Miller, of The Drew Carey Show and Scrubs fame. Not a bad cast. 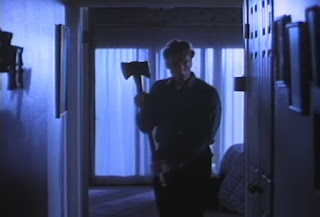 While the lesser of the original three STEPFATHER films, STEPFATHER III is still better than the 2009 remake by having some memorable moments and being unintentionally funny at times. The narrative of The Stepfather having to juggle two families at once is a fun time, as well as having a wannabe detective for a stepson that keeps the villain on his toes. Otherwise, this film does nothing new with its familiar premise - the only difference is a weaker script with lesser actors. And the film does wear a bit of its welcome by being twenty minutes too long. The direction by Guy Magar is what one would expect from a TV movie thriller, with no real style and shying away from any gore that could have elevated this sequel. And while the actors aren’t as memorable as those in the previous two films, they still do a good job - in particular Priscilla Barnes [of Three’s Company fame] and John Ingle as a friendly priest who gets too involved with the mystery. Robert Wightman is no Terry O’Quinn, but he has a goofy charm about him that makes him amusing to watch. While not a great film or sequel, STEPFATHER III is a better film than I had remembered it - even if it’ll make you long for the two O’Quinn cult classics.