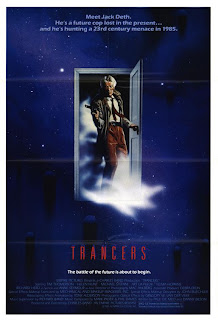 
PLOT
The year 2247 in the town of Angel City, detective Jack Deth (Tim Thomerson) is trying to stop his arch-nemesis, Martin Whistler (Michael Stefani), from destroying the future. Deth tries to find Whistler through trancers, or psychically controlled slaves under Whistler's power. Wanting to retire, Deth learns from a governing Council 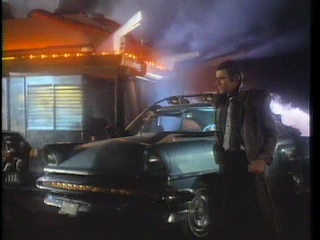 that Whistler has traveled back in time to 1985 to murder the ancestors of the Council members. Deth decides to help the Council by transporting to the past, which is done by using a drug that transfers one's memory into the body of an ancestor.

In Christmas of 1985, Deth feels out of touch with the past, not sure who his ancestor is supposed to be. He learns that his ancestor just had a one night stand with Leena (Helen Hunt), a mall worker. After a bit of weirdness and understanding, Leena decides to help Deth with his mission, realizing that Whistler is in the body of a powerful police inspector. But when Whistler has already created a squad of trancers to aid him, Deth and Leena soon realize that they're in pretty big trouble.

HITS
- Solid acting. TRANCERS is a really low budget film, meaning that special effects and visual presentation aren't going to be the highlights of this movie and the story and acting would have to compensate for it. Luckily, the acting in TRANCERS is very good and keeps the viewer engaged. Tim Thomerson as Jack Deth [which is an awesome name for a character, by the way] is great. He brings a bit of a film noir presence in terms of his delivery and body language, creating a detective hero we can root for and care about. I also thought he had great one-liners, my favorite being "dry hair is for squids" and he's a loveable asshole of a man who comes across as very cool. No wonder he's a cult hero for many. Helen Hunt, who would later become a major television star and an Academy Award winner, is good in one of her earliest film roles. She's really cute here and comes across with a lot of energy and spunk. She probably doesn't put this film in her resume anymore, but she should be proud of her good performance here. Michael Stefani was also good as the villainous Martin Whistler, creating a good foil for Thomerson. Wish he had more to do though. We also get some appearances by Thelma Hopkins and Art LFleur, who do well also. Just a great cast that was willing to go along with anything Charles Band, Danny Bilson, and Paul De Meo put on paper.

- Good direction. Charles Band isn't the greatest director in the history of cinema [he's a better producer], but he does know how to tell a good story with the smallest of budgets. It's a pretty simple point-and-shoot kind of movie, but the action is well done and there are some decent tense scenes. The pacing is excellent, as the film is only 77 minutes - 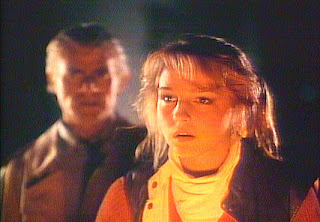 meaning no filler. The lack of money to really create his vision does bring the film down a bit, because Band had a grander scale for this type of project, but makes the most of what he does have. There's a certain charm and appeal about the direction that we don't see often these days. I approve.

- Interesting, entertaining story. TRANCERS is obviously inspired [or maybe even steals] from bigger budgeted films, like 1982's BLADE RUNNER and 1984's THE TERMINATOR, and sometimes comes across as a parody of those films. But screenwriters Bilson and De Meo do address interesting ideas that make it stand out from its inspirations. I love how the future world is in total chaos and bleak as hell. Hell, Los Angeles sunk right into the Pacific after the big earthquake and all that's left is a beach. I also love the idea of using a watch to stop time for a limited amount of time, as well as transporting one self into the body of an ancestor as a disguise. There are plotholes, which I'll get to, but at least you're invested by Deth's mission to stop Whistler from destroying the Council members by eliminating their ancestors in the past. The "fish out of water" subplot is done very well, as Deth doesn't understand the past he's traveled to, letting Leena be his guide and give her more than just the stereotypical girlfriend role. The idea of the villain controlling others to be his minions to achieve his goals is always a cool one. Plus I think using the 80s culture works in favor of the film, even if it does date it quite a bit. TRANCERS isn't original in any way, but at least it uses what it takes well enough to keep the viewer engaged from beginning to end.

- Great use of a no-budget production. TRANCERS would be epic if it had the budget needed to make a blockbuster sci-fi/action movie. It doesn't though, but it doesn't stop Charles Band from making his vision work regardless. The "stopped time" scenes would be done more stylish today, but instead we just see Thomerson move people around in the scene in real time to change the events that are supposed to happen. Of course, Thomerson goes inside an ancestor that looks pretty much like him - to save money by not using a younger actor. There's no time machine, so a drug inside a syringe is used to imply the time travel through the use of cuts and transitions. The weapons used look kind of cheap, but it makes the film more charming. Plus the future looks the same as the past - same clothes and hairstyles to comedic effect. It'd be something to see a redo of this with major money behind it, but Band and company do a good job taking what they did have and making the most of it. 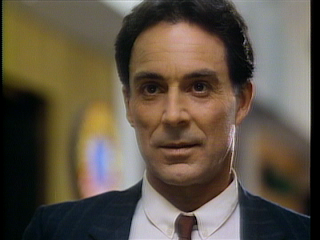 the other side of the fence, it's really a shame that TRANCERS didn't have the budget needed to truly visualize Band's vision. With some cool special effects, interesting futuristic locations, and more time to do some stylish direction, TRANCERS would have been major. It still works well as a low budget B-movie, but this film would have been really something with a real budget. Some things can't be helped though.

- Plot holes. TRANCERS is full of these, which sort of takes down the narrative a bit. Some things aren't explained enough or in a way that we understand why these characters are conducting themselves in such a manner. For example, why doesn't Deth go back a few days prior to stop Whistler instead of having to go back in 1985? If the Council is so concerned about their lives being altered due to past events, why don't they go back in time and stop it from happening themselves? Wouldn't going back in the past change the future anyway? What are trancers exactly anyway? It's never really specific. You kind of ask yourself these things while watching the film, even while the film is keeping you watching.


THE FINAL HOWL
TRANCERS, even with its flaws 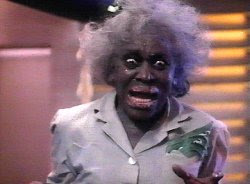 , is still a fun B-movie sci-fi/action hybrid that deserves a look and some respect as well. Even with a small budget that hindered the production from truly visualizing the interesting ideas planned for the film, there's a lot more right going on here than there is wrong. It has solid acting, interesting characters, an entertaining narrative, and a lot of heart from Charles Band and company. It won't keep you in a complete trance, but you'll be under the film's spell for a while.