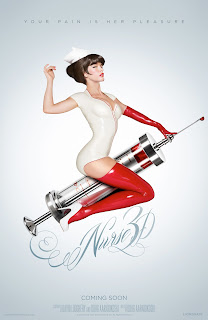 PLOT
Abigail Russell (Paz De La Huerta) is an unstable nurse who enjoys picking up adulterous married men, seducing them and then killing them on her off hours. A new nurse named Danni (Katrina Bowden) joins the rotation, capturing the eye of Abigail. Infatuated with Danni, Abigail wants her to herself - enjoying watching Danni argue with her boyfriend (Corbin Bleu), and slipping her a roofie at a club to have her way with her with another man. As Danni struggles to remember what happened to her, Abigail sets her sights on all the men in Danni’s life who act like disgusting pigs. Danni figures out what’s going on, confronting Abigail about it. Feeling betrayed, Abigail decides to make Danni’s life miserable by framing Danni for everything she, herself, has done.

The last couple of years have been a bit rough personally, leading to yours truly really falling behind when it comes to movies and even television. When your horror friends talk about how good these new independent horror films are and you have no idea what they’re talking about, you sort of question whether to give back your Horror Credentials Card. As I gain motivation to write reviews again, I decided to check out stuff I may have missed within the last few years. Unfortunately, not all of them are as good as I had hoped, as is with the case of NURSE 3D. 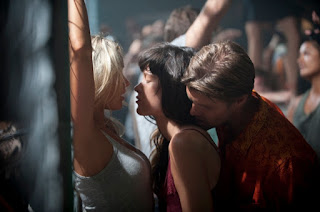 NURSE 3D is obviously a horror film since our lead character is a serial killer with some emotional issues towards adulterous men. It’s not really scary, but I can instantly see why it would fall within the horror genre. However, NURSE 3D is also supposed to be a comedy. And… I didn’t really laugh much. Niecy Nash’s character had some chuckle-worthy moments, but nothing about NURSE 3D made me bust a gut or anything, even unintentionally. I guess it wanted to be clever and witty about something, but it just made me look at the clock wondering if it was going anywhere. And if not, when was this film going to finish? I shouldn’t be feeling that way when there are some decent looking women on my television seducing men before murdering them. I should be getting some sort of kick from that. But I honestly didn’t really care all that much.

NURSE 3D is really confused as to what it wants to be, which pretty much ruins the film in my opinion. It wants to be exploitative, like a MS. 45 type of film. It wants to be, like I mentioned earlier, SINGLE WHITE FEMALE. It’s a female AMERICAN PSYCHO. It wants to be so many things, trying to force it to audiences that this is meant to be a cult film that’s not meant to be taken seriously - instead of letting the audience make it a cult film naturally. It tries too hard, which is a shame because the premise is so great and all the elements are there for it to work better. But I just felt bored, wondering why I even bothered watching it most of the time. NURSE 3D suffers from an identity crisis. 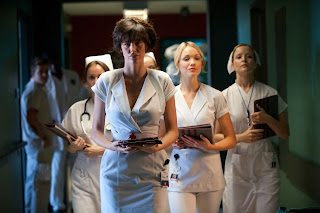 I may be in the minority, but NURSE 3D didn’t do much for me as a whole. The film looks nice and I thought the supporting cast was pretty decent. The gore [CGI or not] was above average and I appreciated the scantily dressed ladies. But the tone was totally off, as the film really had trouble balancing the horror from the comedy [wasn’t all that scary or funny to begin with, honestly]. And Paz de la Huerta is an interesting actress, but she didn’t impress me too much here as the lead. Maybe NURSE 3D is a film that I could enjoy on a second watch under the influence of alcohol, but I won’t be making that appointment anytime soon.