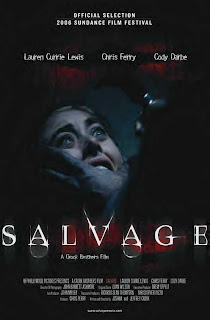 
PLOT - Claire (Lauren Currie Lewis) is a cute convenience store clerk who gets picked up after one of her work shifts by some creepy guy named Duke Desmond (Chris Ferry). Duke claims that he works with Claire's boyfriend, Jimmy (Cody Darbe), in the salvage yard and that Jimmy sent him to pick her up. After an uncomfortable trip home due to a conversation that involved "bitch" and the "c-word" aimed at Claire, Duke decides to break into Claire's house, beat the crap out of her, and then kill her by peeling her face off.

The funny this is that this seems to be Claire's nightmare of sorts - that happens in real life. Over and over and over and over again, like GROUNDHOG DAY. Everytime Claire tries to change her routine or find information about Duke, the result remains the same with Claire having to relive this nightmare again. Is Claire going nuts? Or is there something more twisted at work here?

STORY - SALVAGE is an interesting low-budget, independent thriller [although it claims to be a slasher but I disagree with that] that's pretty much the same narrative repeated multiple times, just with slight changes each time to lead into a really weird twist at the end. At times, the film is a bit repetitive and boring because while the scenes change each time, they don't really get to the point fast enough. However, the slight changes within the repetition do offer up clues to what is really going on between Claire and Duke, so they're not in vain at all.

To really go deep into the narrative itself would be spoiling the entire film. I will say that the characters are pretty well written, as well as the dialogue. There really isn't alot of it, which helps limit exposition that's not needed. The dialogue actually creates character and offers information that's crucial to the ending of the film. As for the ending, it'll probably take more than one watch to really get it. I had to watch it like three times to understand what the real deal was. It's actually quite clever in a way and I never really saw it coming. I don't think everyone will love the twist, and I'm not sure if I do either. But it was an interesting take on the meaning of Claire's nightmares.

DIRECTION - The Crook Brothers do a really nice job with the low budget they had to work with. There were some nice moments of tension and suspense. The face peeling scene, while not entirely graphic as a gorehound would probably like, did make me cringe since it was more implied than anything. The pacing could have been better though, but other than that, The Crook Brothers used what they had to work with really well.

VIOLENCE/SEX/LANGUAGE [aka THE GOOD STUFF] - There's a bit of sensuality in the film but nothing is shown. The most you get is a butt crack in a foggy shower. The language is pretty heavy, especially since the c-word is thrown out there. And there's a decent amount of gore, with the highlight being a head exploding after receiving the bad end of a shotgun blast. Not for the kiddies.

ACTING - The acting was probably the best part of SALVAGE. Lauren Currie Lewis, looking like a younger version of Alicia Silverstone, does really well as the lead girl, Claire. I really bought Lewis' expressions of confusion and fear throughout the film. Lewis has a nice presence and appeal that most young actresses don't have in my opinion. She was perfect in the role and would like to see more of her. Chris Ferry was also great as Duke Desmond, the deranged serial killer haunting Claire. He was a pretty creepy and intimidating dude, just from the way he talked to especially these smirks and grins that would make me avoid the guy period. The only other main character of note was Cody Darbe as Jimmy. He brought the comic relief to the film and I enjoyed watching him.

MUSIC - Evan Wilson's score is pretty good for the tone of the film. However, most of the soundtrack involves this indie nu-metal band called Devola. They sounded like a bad ripoff of Evanescence and Lacuna Coil and their songs were used in really crucial scenes, especially towards the end. Just very generic and the songs annoyed me a bit. It ruined the mood of these important scenes. These songs added nothing to the film.

THE FINAL HOWL
SALVAGE is a cool flick if you're willing to take a chance on it. If you like stories about deja-vu, this movie is for you. It won't appeal to everyone but I think it's worth at least a single look. It has fantastic acting and a narrative which has a twist worth waiting for because it actually makes you use your brain. Shocking, I know. If you have 80 minutes to spare, SALVAGE would make a more than decent time filler.