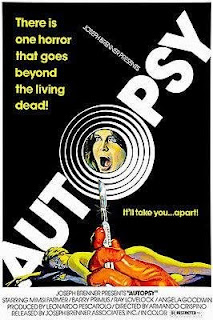 PLOT (from IMDB)
A pathology med student and a priest team up to investigate a wave of suicides blamed on sun spots and discover a number of them to be actual murders. 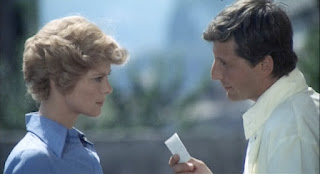 As a fan of the giallo movie, I’m always excited when I sit down and watch one I may have heard of, but never watched before. It’s also more interesting when that film is made by a director I’m not all that familiar with, knowing not to expect something in the vein of Dario Argento or Mario Bava. I thought 1975’s AUTOPSY would be that film. I mean, it has a supernatural theme going on. It’s by filmmakers I have no film knowledge of. And look at that title! I mean, this has to be a cool movie, right?

Unfortunately, AUTOPSY is pretty much a mediocre flick that pulled me out of it as much as it tried to pull me in. It’s weird, all over the place, and is more focused in showing nudity than telling a cohesive story that would give a viewer a hint as to what’s going on and what the point of the film is. This one is a head scratcher, and that’s not even considering the convoluted final act that made me raise a brow more than once.

It’s interesting that AUTOPSY’s narrative is both a good and a bad thing. It’s a film that has such a good concept going for it but doesn’t do jack squat with it. The opening ten minutes is probably the most interesting part of the film because it doesn’t play out like a giallo at all. The intro to the film goes all out, as we witness a bunch of people either commit suicide or homicide while flashes of pulsating fire are shown on the screen. Apparently this violent behavior is being triggered supposedly by sunspots, if the original Italian title of the film [Macchie solari] refers to. We continue to see these sunspot flashes throughout the flash every now and then, triggering weird responses within some of the principal characters in the film.

While this sunspot idea is pretty cool since it’s a mystery one wouldn’t expect in a giallo film, AUTOPSY does nothing with it. Hell, I’m still not sure why these sunspots are affecting people, especially since the people affected are so random. It’s not like the screenwriter cared, since it’s brought up once and then ignored for the rest of the film to cater to a generic mystery-thriller narrative we’ve seen done to death - and honestly done better before and since. I mean, the killer in AUTOPSY does use the sunspot excuse to cover up his or her murder spree, so that’s at least something, I guess. But the sunspot mystery is honestly the only thing in this film that feels fresh since it’s not a subplot that’s done all that often. Why did these sunspots trigger so much violent behavior? I guess we’ll never know. 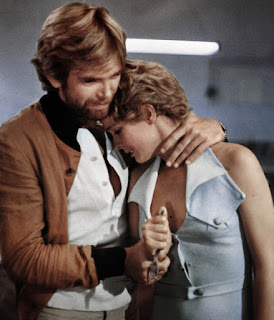 I also had some issues with the characters in this film. Was I supposed to like any of these people that I had to watch for 90 minutes? Main character Simona is somewhat interesting due to how she’s written. She had a strange obsession with death [being an American morgue intern will do that to you] that leads into some interesting imagery that I’ll get into shortly. Simona also had this pseudo incestuous relationship with her father that was seriously creepy, as well as having issues with men and just being sexual, period. Like, she’ll get naked with her love interests but then freak out when the passion rises. I guess it stems from her father, but nothing about her neurosis is explained. She’s also triggered by the sunspot deal from time to time, but doesn’t do anything major that would make you think she was affected. It was hard to relate to her because she was so skittish and kind of annoying at times. She’s also never really a target for the villain until the last five to ten minutes, making any sort of peril meaningless.

The other characters are just as weird and unlikable. Father Paul Lenox is probably the worst person to ever put on the cloth and collar. His erratic behavior is bizarre, suffering epileptic attacks at times that made me question whether that was what was attacking him, or he was suffering from the sunspots. He also had a strange relationship with his sister, Betty, while falling in love with Simona. For a man of God, he behaved in ways that made me question how he even passed any sort of tests to become a priest. Dude was all over the place in terms of his actions. Simona’s father, Lello, was way too passionate with his daughter and a bunch of redheaded women who seemed to be in love with this guy [being rich raises your attractiveness]. He had a subplot involving business dealings and a questionable will that would take center stage in the last half of the film that becomes totally convoluted and uninteresting as the film reaches its conclusion. Edgar, Simona’s love interest, is a super cool photographer and race car driver who tries and be patient with Simona’s trauma with sex and affection, meaning he’s probably up to something. Then we have Gianni and Ivo, two really perverted men Olivia Benson and her SVU unit would probably love to get their hands on. Both are at least memorable and have fun moments due to their sliminess. Like I said before, none of these characters are easy to connect with, making me care less about what happens to any of them in this story.

And even though the direction isn’t as stylish or as memorable as more popular gialli out there, I think Armando Crispino did alright with some of the visuals and use of the location. The film looks quite nice, really showing the beauty of Italy. I also liked some of the locations, especially this death museum that is both inviting and creepy at the same time. I wish it was used more, but I liked the concept and I would go to a real one during Halloween season. I also thought some of the death scenes and aftermath moments were very good, especially during the sunspot moments. We also get a race car accident with a nicely done stunt. I also enjoyed the hallucinations a character experiences in the morgue with the dead coming back to life and having this weird orgy. If only the film had kept up with that surreal and strange feel throughout. And if you enjoy a lot of nudity, this film is definitely for you. It definitely kept me engaged. The pacing and flow was a bit weird though, but I felt the second half was directed stronger than the first half despite a weaker subplot being the focus. It’s not as colorful as Dario Argento or as atmospheric as Mario Bava, but I thought Crispino did alright with what he had to play with.

The acting was also fine, despite the portrayal of the characters on paper. No one really stood out to me in terms of a performance, maybe besides Mimsy Farmer in the lead. Her frazzled and strange portrayal of the main character is something to watch. And when she starts to kind of annoy you, she takes off her clothes so you can rewind and like her all over again. I wish her character had more interesting things to do, but Farmer did what she could. I also liked Ray Lovelock as Edgar. He’s the only actor and character who came off as believable to me, so kudos to him.

And special mention goes to the late Ennio Morricone for his haunting score. Probably not one of his more memorable compositions, but it fits the film and elevated AUTOPSY more than it had any right to. 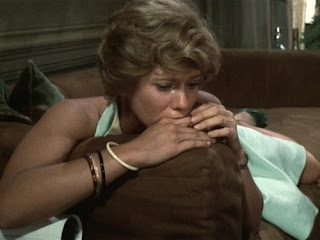 Considering how strong 1975’s AUTOPSY begins with characters committing homicide and suicide due to strange sunspots, as well as a strange zombie orgy, I was expecting this giallo to be a special one. Instead, it would rather ignore a fresh take on the sub-genre, only to focus on a standard mystery-thriller that’s not all that interesting. It doesn’t help that the characters aren’t likable, even if the actors playing them are doing their best with what they’re given. However, the first act of the film is fun, and the direction by Armando Crispino is pretty decent with a great use of setting and well done death scenes. Definitely near the lower end of gialli I’ve seen, but maybe worth a look if you’re a fan of the sub-genre.