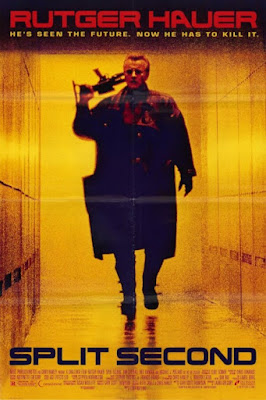 Plot: In a flooded future London, Detective Harley Stone hunts a serial killer who murdered his partner and has haunted him ever since. He soon discovers what he is hunting might not be human.

Directed by the man who brought us the 1981 slasher classic THE BURNING, Tony Maylam’s 1992 sci-fi/horror film SPLIT SECOND is a solid B-movie that wears its inspirations on its sleeve. Take some atmosphere and aesthetics from BLADE RUNNER [including star Rutger Hauer], add some monster action like PREDATOR and ALIEN, put them all together and you have this cult flick that’s not perfect but has enough going for it to make it watchable.

SPLIT SECONDS’s dark and gritty dystopian set pieces create an atmosphere that Batman would feel more than comfortable living in. With the main character being an out-of-control detective who has burned more than a few bridges in his professional life, his stories of this serial killer, he’s obsessed with being more than human, creates this level of paranoia and mistrust throughout the film. It’s also helped by Maylam’s direction, as he keeps the killer’s appearance hidden for much of the film, so you’re left wondering if the killer is just really creative with his murders or is something more supernatural. While Maylam keeps the death sequences off-screen, the aftermath of these events are pretty gory, which makes up for it. And the action scenes, for the most part, are directed well despite the obviously low budget. Unfortunately, the final act seems like it was directed by someone else, as it feels rushed and doesn’t conclude the film in any impactful way. 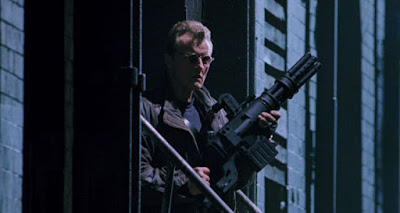 What makes SPLIT SECOND worth the watch is Rutger Hauer as Harley Stone, who acts like a badass and recites dialogue that would only sound cool coming from him. He fleshes out your generic hard knocks detective with charming quirks, like drinking tons of coffee while stirring it with random pens he borrows from other detectives. Hauer also portrays paranoia well, while coming across convincingly as a man obsessed with his work, not caring if he lives or dies apprehending his target.

Rutger has some comical moments with the supporting cast as well, especially Alistair Duncan who plays Dick Dirkin - the by-the-book nerdy detective who starts becoming more reckless and gritty as the hunt for the killer deepens. Rutger also has some nice rapport with Kim Catrall, who is there to play the damsel-in-distress but has her moments to shine.

While I did expect SPLIT SECOND to wow me more than it actually did, considering how many of my friends have recommended this film to me, I did have fun with this flick. Despite its modest budget and disappointing finale, it had good action, memorable gory moments and actors who seemed to be having a blast making a silly sci-fi B-movie. 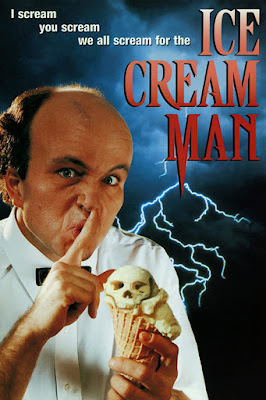 Plot: Young Gregory Tudor sees his local ice cream man murdered and later grows up to inherit his business, opting to inject gruesome ingredients—including human body parts—into his frozen confections. When one of the neighborhood boys goes missing, the local kids suspect Gregory and band together to get to the bottom of things.

ICE CREAM MAN is a really odd film that one would think would be better considering the cast. But it never really comes together due to so many different tones, weird character choices and the fact that the movie never knows if it wants to be a scary movie or a PG-13 teen adventure film in the vein of THE GOONIES, STAND BY ME or THE MONSTER SQUAD. There are even moments where the creepy and murderous Ice Cream Man is given moments where we’re left to sympathize with how people see and treat him, despite the fact that he kills people and uses their body parts in his ice cream servings. I was never sure what I was supposed to be getting out of this film, if anything at all.

The direction by Paul Norman is just as odd, as Norman seems confused as to what he wants to express with ICE CREAM MAN. If he’s going for a comedy, it doesn’t work because the film isn’t all that funny. If he’s going for horror, that doesn’t work because there’s nothing about the film that’s creepy or scary. And if he’s focused on making this a teen adventure, that doesn’t work either because the kids aren’t all that interesting enough to invest in them. The film isn’t all that stylish or interesting to look at either, looking like your standard 90s direct-to-video feature. The film is also oddly paced [those flashback moments ruin the flow in the film’s last act] and it cuts away from the murder scenes, which would have bumped up my rating if I was allowed to see at least some cool gore here and there. Considering Norman was a pretty prolific adult movie director, he sure had no idea how to complete the money shot with this flick. 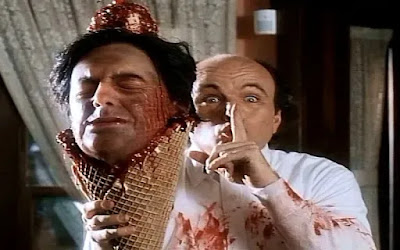 What keeps ICE CREAM MAN from being totally terrible are the actors, who all seem to be having fun in their roles no matter how small and/or quirky they are. Clint Howard is the best thing here, giving this villain role so many layers that you’re torn on how to feel about the Ice Cream Man. And that’s not a terrible thing because, what could have been a one-note character, Howard makes into a three-dimensional human being who clearly feels justified and damaged in believing what he’s doing is right. While the other actors don’t really get to shine as much as Howard does, at least they all add memorable moments to the film. David Naughton is a cheating husband. David Warner is a priest who is the father of one of the teens. Olivia Hussey is oddly playing an older, kooky nurse in an amusing role. And Jan-Michael Vincent plays a cop - at least I think he is considering he looks like he would rather be somewhere else. I know the actor was dealing with substance abuse at the time, but Vincent doesn’t even bother trying to hide his lack of enthusiasm here. Lee Majors II makes me wish his father was in this film instead. And the younger actors are fine, although I’m not sure why one of them was forced to wear a fat suit or pillow. Did the film really need a kid pretending to be overweight? Oh, those Hollywood stereotypes!

If you’re looking for something brainless and dumb for 90 minutes, I guess you could do worse than ICE CREAM MAN. But if you want to watch a good movie, I’d steer away from this one. This is a film not worth getting brain freeze over. 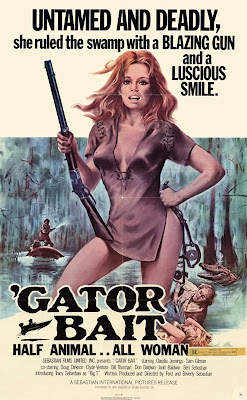 Plot: Desiree lives deep in the swamp and supports herself and her siblings by poaching. Ben and deputy Billy hope to get a little sexual comfort from the “Cajun swamp rat” when they catch Desiree trapping ’gators, and give chase. Desiree outsmarts them but Billy accidentally shoots Ben and tells his sheriff dad that Desiree did it. Ben’s dad and sons join them in the search party and quickly get out of control. Soon the hunters become the hunted as Desiree exacts her revenge for their violence against her family.

1974’s GATOR BAIT is an exploitation drive-in movie that doesn’t come close to reaching the heights of films that inspired it, like 1972’s DELIVERANCE - nor is it as upsetting and controversial to watch like later films such as 1977’s I SPIT ON YOUR GRAVE. However, there’s something oddly charming about this low budget flick that makes it worth a look for 1970’s cinema lovers. 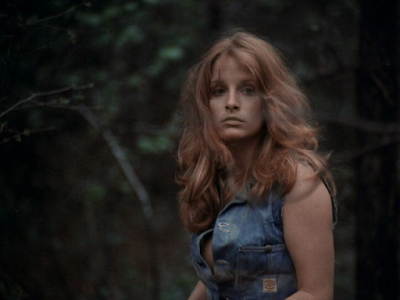 Considering the film’s themes, however, GATOR BAIT is fairly tame and almost PG-13 compared to other films just like it. While the acts committed in this movie are kind of gross, there’s a vibe of fun surrounding it all that makes you feel both dirty and entertained at the same time. It kind of plays things like your typical rape-revenge movie, where the good guys suffer but get their vengeance while the bad folk suffer both physically and emotionally. It’s a simple science and GATOR BAIT pulls it off fairly well, even if it does drag at points in its short runtime.

The direction by Beverly and Ferd Sebastian isn’t going to win any awards, but it does the job fine. The cinematography is competent, the soundtrack is actually quite good, and the pacing is done well enough for the film to never wear out its welcome. And the acting isn’t the greatest, but that’s part of the charm with GATOR BAIT. Former Playmate of the Year (1970) Claudia Jennings is really the most memorable person in this film. She looks fantastic in every frame of celluloid she’s in, with her Daisy Dukes and her shotgun making her look like a woman you don’t want to mess with. I do find it funny that, in this world, the men are dirty and not really all attractive while all the women look like they got hired from a modeling agency. There must be something special in that swamp.

GATOR BAIT is a sleazy and exploitative 88 minutes of backwoods men doing dumb, violent things while a woman sorts them out with swift punishment. Not the greatest film I’ve seen of this type, but it definitely has an odd charm about it that makes it worth a look if you’re into this kind of movie.