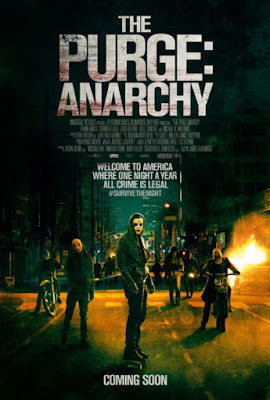 Plot From IMDB: A couple (Zach Gilford & Kiele Sanchez) are driving home when their car breaks down just as the Purge commences. Meanwhile, a police sergeant (Frank Grillo) goes out into the streets to get revenge on the man who killed his son, and a mother (Carmen Ejogo) and daughter (Zoe Soul) run from their home after assailants destroy it. The five people meet up as they attempt to survive the night in Los Angeles. 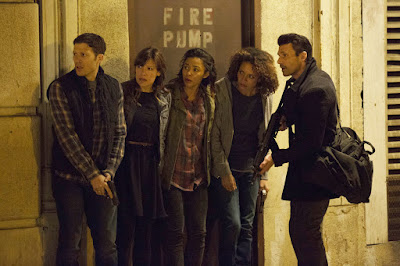 Review: 2013’s THE PURGE was an above-average film with a great premise, but the execution was a bit flawed. While the home invasion narrative worked for the most part, a lot of the social commentary and execution of how the Purge effects other people besides the one family we were focused on was lost. Thankfully, 2014’s THE PURGE: ANARCHY goes beyond that, allowing the audience to see how this “holiday” effects a larger population, while really putting the social commentary on the forefront to really relay the message behind the Purge.

Unlike the more straightforward horror-thriller of the first film, James DeMonaco was inspired by ESCAPE FROM NEW YORK, THE WARRIORS, and THE RUNNING MAN to create a more action-oriented film that allows more character development and more exciting set pieces that allow DeMonaco to clue us in on the real reason for the Purge. Watching the upper-class and government use these 12 hours to eliminate the segment of the population they feel is corrupting the society [a.k.a. the poor] portrays how laws [good and bad] can be misconstrued in one’s image to do bad things to others - something that has become seriously relevant in our day in age. The final act, where our protagonists must play a deadly game of tag [as if this is THE HUNGER GAMES] while the aristocrats watch with glee as they sip champagne, gives us a real look as to what this new America has become.

I do think DeMonaco hammers the message a bit too much, to the point where we say “we get it”. And there may be too many intertwining stories and villains that don’t get enough screen time. But compared to the first film, the commentary and narrative are stronger, which makes our characters more interesting, deeper, and more likable or unlikable.

The direction by DeMonaco is a vast improvement over the first PURGE movie, as it displays more confidence and more of a vision that the first film wouldn’t allow him to have. There’s a lot of tension and suspense throughout, with a relentless pace that keeps the bleak mood going from beginning to end. I like how the film builds and builds, visualizing the level of violence [great action sequences and gore] that occurs throughout the 12 hours - reaching its apex towards the end. I loved the gritty look and even some of the shaky cam. And the music score by Nathan Whitehead brought that 80’s goodness with the synths.

The acting is pretty good. Zach Gilford and Kiele Sanchez were kind of grating as the young couple, but I think that was the point since they were going through personal turmoil in their marriage, as well as being victims of the Purge. They played the dumb characters in the film you wanted to slap more than once. Carmen Ejogo and Zoe Soul were very good as the mother and daughter - especially Soul, who brought a sassiness and intelligence that I enjoyed quite a lot. Michael K. Williams does good with what he’s given, while Jack Conley is pretty menacing as the turret-shooting villain. But THE PURGE: ANARCHY belongs to one man - Frank Grillo. The dude is just a total bad ass, playing a Punisher-type character who broods while kicking butt and taking names. The guy has this quiet charisma and presence that makes you want to watch what he does. I’m not surprised they brought him back for THE PURGE: ELECTION YEAR. Grillo is honestly the best part of this film, and this franchise.

The Final Howl: A lot better than 2013’s THE PURGE, THE PURGE: ANARCHY finds its niche as an action-thriller that takes elements of late-70’s/early 80’s gritty action films to bring them forth for a newer audience. James DeMonaco finds his confidence as a director, with cool visuals and great pacing. The social commentary is heavy handed at times, but also helps deepen character relationships and the idea of The Purge. And Frank Grillo outshines the rest of the cast as a badass action hero who now seems to be the centerpiece of this franchise. A rare sequel that’s better than the original.