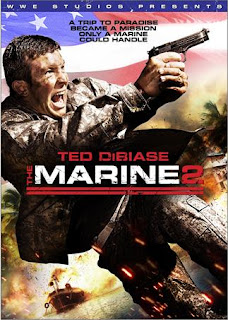 
PLOT
A marine on temporary leave, Joe Linwood (Ted DiBiase Jr.) wants to return home to be with his wife, Robin (Lara Cox). Unfortunately, Robin's boss (Robert Coleby) is opening some environmental friendly resort in Southeast Asia and she has to go to make sure his dumbass doesn't ruin his image. This means Joe has to go with Robin to this resort. Beautiful beaches, a romantic setting, and free food - how terrible!

Anyway, some terrorists decide to crash the party and take everyone hostage, wanting a tribute that would pay for the crimes against their people. Joe, the only one who wasn't captured, gets help from a former Army soldier (Michael Rooker) to save his wife and the rest of the hostages. Well it's better than jobbing to Triple H again!

STORY
I remember almost hearing about this sequel and just laughing at how absurd it sounded. Why anyone would want to make a sequel to one of the worst films of 2006, THE MARINE starring John Cena, was beyond me. But then again, THE MARINE is still the highest grossing WWE Studios film, so obviously Vince McMahon wanted to capitalize on that. What made things even stranger was that Cena was no longer involved, instead being replaced by Ted DiBiase Jr., the son of "The Million Dollar Man" Ted DiBiase. I have nothing at all against Ted Jr. I actually like the guy, as he brings his work boots everytime he wrestles and is poised to be one of the bigger stars in the future of the WWE. But the guy is a heel [or bad guy] at the moment and making him the hero of an action film just seemed like weird marketing. Still, I took a chance on this film - and you know what? It wasn't that bad. I'm not saying THE MARINE 2 is a great film. It's not even a good film. But it's decent and it's a hell of a lot better than that Cena debacle in the original.

The story is pretty much your generic action film. It takes elements from DIE HARD, RAMBO, and any other 80s action film that was really popular at the time. Hell, it even rips off THE MARINE, as the hero has to [once again] save his wife from evil-doers. What does the WWE have with men saving their wives from danger? THE MARINE? 12 ROUNDS? THE MARINE 2? Three strikes you're out! Enough is enough with this sub-plot! But besides that, the story is a lot more focused and more grounded than in the first installment. The characters are a bit better developed, the villains actually have a reason for what they're doing, and the dialogue isn't totally repulsive. So kudos to WWE Studios for actually hiring writers who actually tried to make a film people would somewhat enjoy. Now if they would do that with their current wrestling product, especially on RAW, I would be a happy man!

And supposedly, this film is based on true events. What events those would be, I have no idea. If someone knows, let me know.

DIRECTION
Roel Reine actually did a very nice job on THE MARINE 2. There was some style h 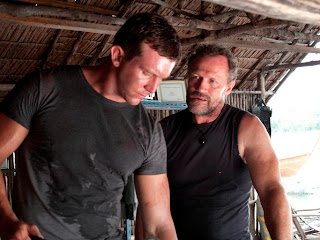 ere [beautiful angles and nice camera movements and transitions] and the editing was really well done. I even thought the pacing wasn't too shabby. I wish the action scenes were more exciting to watch, but I wasn't bored. There was one action sequence where the camera rotated around the entire choregraphy of the fight scene, which I thought was very cool. And I must say that the cinematography for this film was really striking and beautiful. For a low budget direct-to-DVD film, it looked anything but. The visuals really impressed me.

VIOLENCE/SEX/LANGUAGE [aka THE GOOD STUFF]
Well for an action film, it's not overly violent. Still, there is blood, explosions, shootings, stabbings, killing - standard action movie stuff. The language was pretty tame. I think the worst I heard were "asshole" and "shit", both said by DiBiase. And there's no sex at all besides a make out scene on the beach. For an R rated film, it almost felt PG. With the current WWE product, not surprising.

ACTING
While not Oscar-worthy in the slightest, I've seen worse. Ted DiBiase Jr. does okay in his first movie role. He's really wooden at times, but begins to loosen up towards the end of the film. He doesn't have many lines, honestly, but he does okay with them. The action scenes were really nice though, as he did his own stunts and showcased his athleticism. DiBiase doesn't have the presence or the charisma of John Cena but I didn't dislike him in the slightest. Michael Rooker, of HENRY: PORTRAIT OF A SERIAL KILLER, CLIFFHANGER, and SLITHER fame, is pretty much the best actor in the film. He's not in it quite a whole lot but his presence is definitely felt whenever he pops up. He should be in a better film to be honest, as he's a great underrated actor. But he doesn't half-ass it here and makes his character interesting just by being the Rook-Man. Lara Cox is hot as Robin. She's a decent actress to boot as well. And Tamuera Morrison as Damo was your generic villain-of-the-week actor/character. He did what he had to do and it worked for the most part.

MUSIC
Can't honestly remember what the music sounded like. I guess it was your typical action score. Nothing to write home about.

THE FINAL HOWL
THE MARINE 2 exceeded my expectations, which were none. But it's a step up from recent WWE films and it shows that McMahon is serious about his new venture. THE MARINE 2 makes for a decent rental if you have 90 minutes to fill, if you're a fan of action or Ted DiBiase Jr.