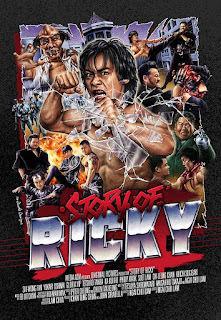 Even though this blog is mainly going to focus on horror from now on, I still wanted to tackle a film that’s pretty notorious in bad film circles. I could have gone with MIAMI CONNECTION, or THE ROOM, or even TROLL 2. But as someone who probably hasn’t discussed enough martial arts films, it was only fitting that I would return with thoughts for 1991’s RIKI-OH: THE STORY OF RICKY. Based on a manga, my first exposure to this film was through The Daily Show back when Craig Kilborn was the host. Watching a man’s head explode as a recurring joke on the show elevated my interest in this film. Is this the only good part of the film? Is the rest of the film just as nutty as this clip is? After watching RIKI-OH: THE STORY OF RICKY a few times, I can honestly say the film is absolutely epic. Dumb as a bag of rocks, but epic nonetheless.

PLOT
In the year 2001, young Ricky Ho (Fan Siu-Wong) is sentenced to a maximum security prison. He has been convicted of murder, stemming from revenge over the kidnapping and death of his girlfriend (Gloria Yip) by opium drug dealers. By his revenge has reason, as Ricky has figured out that the prison warden (Ho Ka-Kui) is the one in charge of the drugs and wants to confront him. Unfortunately, Ricky has to deal with sadistic prisoners and a devious Assistant Warden (Fan Mei-Sheng) who want to torture and kill him for standing up for himself and other prisoners. However these bullies have no idea who they’re dealing with, as Ricky has learnt special techniques that have granted him strong will and super-strength. 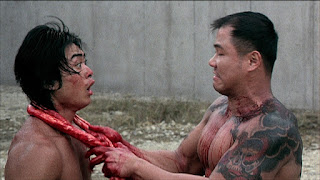 Like I mentioned earlier. the moment where a head explodes put RIKI-OH: THE STORY OF RICKY on my radar as Craig Kilborn kept using it on his version of The Daily Show. I figured that this gore effect was probably the highlight of the film, sort of how the head explosion is the best part of 1981’s SCANNERS. Nothing could top that, right?

Man, where do I begin with how crazy the violence is in RIKI-OH: THE STORY OF RICKY? Even after a couple of times watching it, the film still seems to shock and awe me at times. We have various broken noses. We have faces falling into a bed of nails. We have saws rammed into skulls. People are skinned alive. Eyes are poked right out of their sockets. Men are mutilated by a meat grinder. Body parts destroyed by punches right through them. Did I mention people explode? There’s so much going on in terms of gore and violence, that you laugh at it all due to desensitization. If you love 1992’s DEAD ALIVE, TOKYO GORE POLICE, or the EVIL DEAD franchise - then you’ll probably love RIKI-OH: THE STORY OF RICKY.

Speaking of laughs, the English dubbing is [in my opinion] the only true way to watch RIKI-OH: THE STORY OF RICKY. Every single stereotypical thought you have in your mind about how martial art films are dubbed are correct when it comes to RIKI-OH: THE STORY OF RICKY. The heroes are soft spoken. The villains cackle and sound like they need to clear their throats. And probably the highlight of the film - a little boy [who is probably a twenty-five year-old man in a school’s boy outfit] dubbed by a woman pretending to be a child. It’s so terrible that it’s incredibly charming. Sure, you could watch this film with sub-titles and enjoy the okay acting. But the dubbing truly puts RIKI-OH: THE STORY OF RICKY in the “so-bad-it’s-good” category for me. 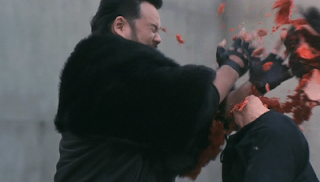 The special effects aren’t great, but they add to the appeal. It’s obvious that mannequins are used whenever major brutality is brought upon someone. And one character mutates into a Hulk-like creature to hilarious results. But you have to give the film credit for trying to bring a comic book-like visual presentation when it came to the violence and some of the characters. Seeing limbs ripped off and body organs used as weapons adds to the appeal, and the effects look believable enough in this world to not be bothersome.

It’s helped that director Lam Nai-Choi knows what kind of film he’s making, using the visual style of the film to be the focus over the story. The film moves briskly, not once letting that logic settle in your mind to ruin the experience. You get action scenes, followed by hilarious flashbacks that add to Ricky’s character, followed by more action scenes. You never feel bored. You feel like the film is making you dumber. For a ninety-minute film, it feels a lot shorter. RIKI-OH: THE STORY OF RICKY knows it’s schlock, but uses that to its advantage for a good time.

And while you don’t get an elaborate story that creates bold character arcs for our main characters, the simple premise of revenge is really all you need in RIKI-OH: THE STORY OF RICKY. We learn why Ricky is arrested. We learn how he gained his abilities. And we learn why he doesn’t just break out of the prison with his super-strength, as he has a reason to stay inside the prison to complete his revenge. Sure, the other characters are cartoonish and are just there to be obstacles for Ricky and/or be lambs to the slaughter. But sometimes less is more. The message is told through the action, not the dialogue. That’s not always a bad thing in terms of a film like this. 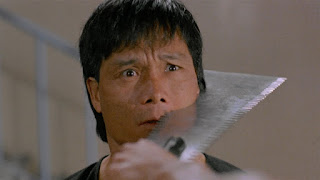 Seriously, RIKI-OH: THE STORY OF RICKY won’t be for everyone and it’s not a perfect film. Yes, the film could use more story in terms of the drug sub-plot. Yes, the film could explain Ricky’s powers more. Yes, Ricky could punch out a wall, let the abused prisoners escape, and still get revenge on the Warden [but waits until the end to do that]. RIKI-OH: THE STORY OF RICKY is not a film that builds upon sense and logic. If you want a great story that you can bite your teeth into, you’re not finding it here. It’s just a gory and violent film, which might upset some.

And I will say that while Lam Nai-Choi does fine with the action sequences and highlighting the violence, he never really builds any atmosphere or tension with RIKI-OH: THE STORY OF RICKY. In fact, the set pieces are pretty bland. Yes, the film takes place in a prison, but I think more could have been done with the location. Especially when there are a Gang of Four - one boss in each directional block of the prison. Yeah, we never really go into these different blocks to see how one differs from the other. Yes, this technical stuff is not the point of RIKI-OH: THE STORY OF RICKY. But it could have been cool to see more than one section of the prison. 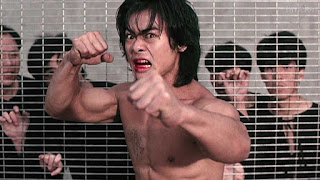