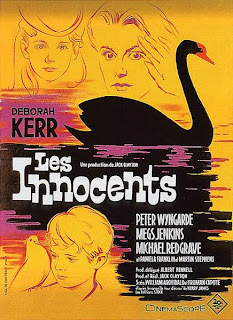 
Being born in the early 1980s, the horror I grew up with hasn't been exactly subtle. From masked killers, to the massive amounts of gore, to great showings of T&A, and to the over-the-top editing and visual style, my generation of horror was pretty much in-your-face and took no prisoners. But there comes a time where you need to get away from the craziness and go back to the past, where horror was calmer, simpler, and more cerebral.

And that, my friends, is when THE INNOCENTS (1961) comes in. Based on Henry James' The Turn of the Screw, THE INNOCENTS is a film that gives the viewer more questions than answers due to its ambiguous approach. Is it a ghost story? Or is it something more psychological at play? All I know for sure is that THE INNOCENTS is one of a kind and mandatory viewing for any true horror fan.

PLOT
Miss Giddens (Deborah Kerr) is happy to take a post as a governess to care for two orphans at their uncle's (Michael Redgrave) estate. But this ideal position isn't what Miss Giddens had pictured it to be. It starts out nicely, with Miss Giddens bonding with the lovely Flora (Pamela Franklin) and mature-for-his-age Miles (Martin Stephens). They both seem like model children. But once Miss Giddens learns about what happened to the last governess, Miss Jessel (Clytie Jessop) [who died under mysterious circumstances], she begins to hear strange noises and see things that make her believe that the estate is haunted by Jessel and her lover, Peter Quint (Peter Wyngarde). Adding to this mess is the fact that the children seem to be acting strangely, almost as if they've been possessed. Are Miles and Flora victims of Miss Jessel and Quint controlling them? Are these two spirits haunting the estate? Or is Miss Giddens losing her grip on reality? 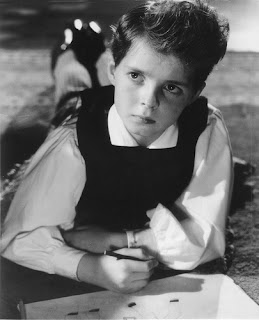 THE INNOCENTS is a film that works mentally on the audience, rather than audibly or visually. The film is extremely ambiguous, making the 100 minute running time that much more uncomfortable. The Turn of the Screw is considered the first Freudian ghost story, where the reader isn't sure if the ghost Miss Giddens sees are real, or if she's projecting her own repressed delusions and feelings onto the children. While this is still highly debated, The Turn of the Screw influenced a lot of early horror films, especially Val Lewton's productions, such as 1942's CAT PEOPLE. THE INNOCENTS is one of the many adaptations of the novel, and is considered the best. And the fact that the debate still rages on makes THE INNOCENTS a must-see in the horror genre.

The adapted screenplay was written by William Archibald [who wrote a Broadway stage play for The Turn of the Screw in 1950] and In Cold Blood's Truman Capote. It's a really interesting story since the main character, and the one we follow through the film, isn't really reliable in what she claims to see and in her actions. Miss Giddens constantly hears strange noises, Flora's haunting song, and sees the ghosts of Quint and Miss Jessel around the estate. When she questions the others about it, none of them can confirm their presence. The audience is never really sure if the lack of confirmation means that the ghosts aren't there, or that the children and Mrs. Grosse [the housekeeper] are too scared to say. So the ghost story aspect is very questionable.

At the same time, the screenplay also pushes the aspect of repressed sexuality within Miss Giddens. When she meets the uncle of the two children, she seems a bit enchanted with him. When she learns of Quint and Miss Jessel, she begins to see them around the estate more and more. In fact, Miss Giddens is convinced that the two spirits have possessed the children and are continuing their love affair through the siblings. Miss Gidden jumps to such conclusions that she jeopardizes the mental and emotional states of the children themselves. So is she inventing this whole thing as a way to express her sexual repression? Or is she just that damn perceptive of things? It's up to the viewer to decide.

I also think the title of the film, THE INNOCENTS, is debatable as well. Who are t 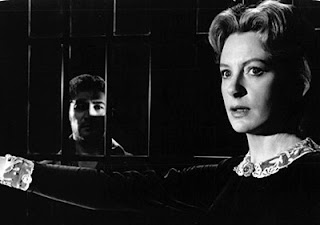 he innocent party here? Miss Giddens, who as a clergyman's daughter was brought up very sheltered with the ways of the world? Or is it the children, who haven't grown quite enough to experience much, yet act more mature than most children their age? In my opinion, the title refers to Miss Giddens. The children, quite honestly, seem more worldly than Miss Giddens could ever be. Miles seems to approach Miss Giddens as an adult, even speaking to her as if he's her boyfriend. Flora's song, "O Willow Waly", is a song of heartbreak that no child would be able to truly understand. And if the children are possessed with the spirits of Quint and Miss Jessel, they've been corrupted by the unpure love the two lovers shared before death. Even as Miss Giddens continues the governship, the estate seems to decay little by little, turning into its own version of death. But on the other end of the spectrum, if Miss Giddens is making all of this up, she's the one corrupting these kids. By pressuring them to answer her questions about what's going on, she's making them feeling guilty for things that are out of their control. In fact, the children do get hurt by Miss Giddens' obsession with the two dead lovers and their presence. So really, who is innocent in this film? We never know. Capote and Archibald really wrote a fantastic screenplay that actually makes you think long after the film's over.

The direction by Jack Clayton, who directed 1959's ROOM AT THE TOP and 1983's Ray Bradbury's adaptation of SOMETHING WICKED THIS WAY COMES, is absolutely fantastic. This has something to do with working with cinematographer Freddie Francis, who actually won an Academy Award in his field for THE INNOCENTS. Before I mention the direction, let's talk about the cinematography. It's absolutely stunning. According to a 1998 article in Film Comment, Clayton hired Francis when he learned the film would be shot in CinemaScope. Since Francis knew how to handle the 2:35:1 aspect ratio that caused Clayton much stress, Francis created a lot of shots where the framing involved objects creating vertical lines. At the same time, Francis used the shadows of the estate to create strong horizontals in the frame to heighten the mood and atmosphere of the film, placing the characters on the opposite side of where the shadows are. The composition and the contrast between the blacks and the whites are exceptional, and can only be appreciated in widescreen. As for Clayton, his direction creates an eerie mood to THE INNOCENTS, increasing the suspense and tension as the film plays. The ghosts never fade away or just vanish in thin air. They only go away when the camera shifts away to another shot, making us wonder if what we saw was really there or just in Miss Giddens' imagination. There's no extraneous shots and truly allows the story to take center stage over the visuals. Just fantastic work by both men.

The acting is also fantastic. Deborah Kerr is great as Miss Giddens. She plays the rol 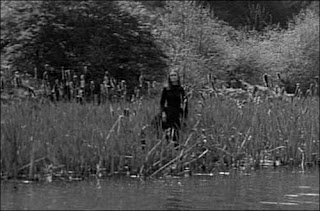 e with intensity, seriousness, and a high level of neurosis. She's so prim and proper, that when she starts acting out, it makes the character of Miss Giddens multi-latered and shows the repressed nature of the character. Just a brilliant performance. Martin Stephens, of the 1960 version of VILLAGE OF THE DAMNED, is unsettling as Miles. He's like ten years old, yet plays the character with such maturity. He treats the role as an adult and his chemistry with Kerr is very uncomfortable, yet interesting to watch. Pamela Franklin, who would later act in 1973's THE LEGEND OF HELL HOUSE, is lovely as Flora. She's the more playful of the two child actors, yet she brings a sense of mystery to the role. The other actors are wonderful as well, especially Peter Wyngarde as the ghostly Quint. Just his eyes and evil laugh heighten the creep factor. A great cast from top to bottom.

- The uncle of the children is a selfish fellow who has no room for children, neither mentally or emotionally. Jon Gosselin is a BIG fan of this film.

- Flora's best friend is a turtle. She must be related to this kid:


- Flora enjoyed watching a spider eat a butterfly. Looks like the outcome for that Spider-Man vs. Killer Moth fight has been spoiled...

- Miles enjoys the companionship with birds. He's the only one that knows what it sounds like when doves cry, other than Prince. Let's hope he doesn't enter that strange phase where he names himself after a symbol and shows his hairy little ass to millions of people.

- Quint had a "savage love" with Miss Jessel. That's the kind of love where the madness takes over and you start snapping into Slim Jims. Oooh yeah!!

- Miles and Miss Giddens kissed each other passionately on the lips. Mary Kay Latourneau is also a BIG fan of this film. 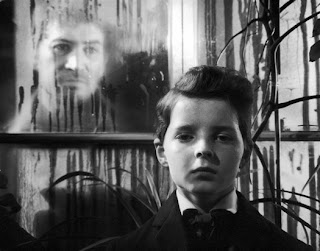 THE INNOCENTS is one of the best gothic horror films that has ever been created. It would make a fantastic double feature with a movie inspired by it, 1963's THE HAUNTING. They don't make horror films like this anymore and I think modern horror fans should watch this and appreciate the true art that the genre can bring. THE INNOCENTS is only guilty of being a fantastic viewing experience.