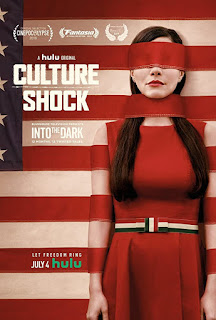 PLOT
This thriller follows a young Mexican woman (Martha Higareda) in pursuit of the American Dream, who crosses illegally into the United States, only to find herself in an American nightmare. 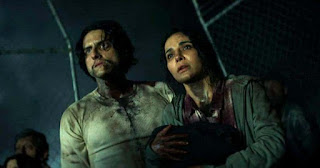 Since I'm pretty much ending the Lunar Cycle posts for the time being, I figured it was time that even the Hulu Into the Dark reviews would get their own posts. And besides the post for GOOD BOY, which was an Animal Summer 2020 themed review to begin with, I’m kind of glad that CULTURE SHOCK gets its own spotlight since I consider it the best Into the Dark installment that I’ve watched so far since I started last October. Is it perfect? No. But it does have something important to say, even if it loses it’s way somewhat by the film’s end.

CULTURE SHOCK is one of the more relevant entries in the anthology’s history so far, as it deals with xenophobia, illegal immigration, and a look at the American Dream and how real it is to achieve it. I know a lot of people are tired of politics and how it has divided a lot of us unfortunately, but it’s still a topic that should be discussed if done in the proper, open-minded way. The last few years, especially, have put a spotlight on the immigration debate and what’s the right way to handle the situation.

So I appreciated CULTURE SHOCK in tackling the topic from an immigrant’s point of view. While not a horror film in terms of jump scares, I’m sure it’s a terrifying situation for anyone put in that position, wondering if America will help them achieve their dreams or just disillusion them to the point where regrets will be felt. The film takes the topic and approaches it as a STEPFORD WIVES and GET OUT sort of tale, taking away one’s former identity and culture and turning it into the “American Way” where people have to act a certain and dress a certain way in order to fit in. The world of CULTURE SHOCK tells us that the American Dream is one of conformity, where one misstep will give you the wrong kind of attention and make you feel treated as an outcast. We live our lives in a pattern. We wake up, drink coffee, go to work. come home, eat dinner, watch television and then go to sleep to repeat the cycle all over again. Only those who break that rhythm manage to get ahead of the others. But only the white folk in this movie seem to have the power, with jobs in politics and education, while the illegal immigrants are the workers who build the towns and help set up the Fourth of July celebration. The main character, Marisol, realizes that her old life in Mexico would grant her the same opportunities that it would in America. She’s the only character who sees the class and color difference in this American utopia created for the film. That’s makes her a threat to be eliminated. 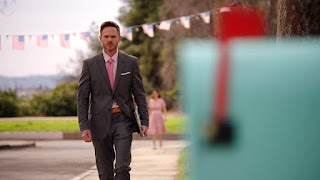 I think the best part of CULTURE SHOCK is that it doesn’t let the political angle overshadow the story itself. Yes, it’s the driving force of the film, but the filmmakers never hammer you in the head with it. The film is subtle and slowly unveils the message and what’s really going on with Marisol and the rest of the Mexicans who were captured at the border who are suddenly acting like pod people. It takes that common idea of people thinking immigrants needing to learn the language and embracing the new culture and norms of the country they’ve tried so hard to enter into, wondering what the point is if they don’t bother. We watch this PLEASANTVILLE scenario where people have assimilated by dressing the same, greeting each other the same, and even eating pizza and hamburgers like gluttons the same. Instead of freedom, it just feels like a programmed assembly line of what some believe America to be. It’s so manufactured, it’s accepted because it’s the easiest way to conform with the least drama.

And it wouldn’t be an Into the Dark feature without some sort of horror/sci-fi tinged aspect. There’s a reason why all these immigrants are all acting the same way, as they’re stuck in an experimental simulation in some underground bunker at the U.S.-Mexico border by a xenophobic scientist believing he’s solving the issue of illegal immigration. So there are moments where it feels like GROUNDHOG DAY, where days repeat for Marisol with different scenarios playing out depending on what she does. And we see occasional glitches and even a force field that makes Marisol realize she’s living in a bubble rather than the real world. It shows that even when a world is perfect [maybe too perfect], there’s still something missing. A lot of people believe that style is everything, but a lot of us prefer to have that substance along with it. The American Dream is a great idea, but if you have to act like everyone else to achieve it, is it worth it?

The film isn’t perfect though. While the first act is interesting with its setup to leave Mexico for a better life in America at the border and the second act is inviting with its false Americana portrayal, the more science fiction third act doesn’t feel as thrilling or as satisfying as it should really. The escape from the lab seems a bit too easy, as it feels clumsy and a bit forced because Into the Dark is a horror anthology and horror aspects need to be implemented to fit the series. It’s definitely ambitious though, with some decent action and character moments. And I really liked the last couple of minutes of CULTURE SHOCK. But considering what Marisol and the others went through, I was expecting more of a punch. It’s fine for what it is, but the first two acts are so strong, the final act kind of pales in comparison and feels old-hat. I found the political stuff more interesting than the horror aspect, but maybe someone else will feel differently.

What doesn’t feel old-hat is Gigi Saul Guerrero’s direction. As a co-screenwriter for the film, Guerrero knows actually where she wants to take CULTURE SHOCK, expressing her opinion of the whole immigration and American Dream issues that have taken over society for the last few years in a big way. Her direction is very confident and very subtle as well, never showing off too much to be flashy, but leading the audience in a visual direction that feels natural and captivating enough to keep us invested.

I think what I liked the most about Guerrero’s direction is how each act looks and feels different from the other. The first act in Mexico has this sepia tone that shows how drab Marisol believes her life there is. It’s also shot hand-held style, which added a bit of grittiness to this part of the film, which added to the tense situation of hiring people to help Marisol out of the country and towards the border where the characters not only have to deal with Border Police, but the Mexican Cartel as well messing things up for them. The second act is the more Technicolor portion of Marisol’s “American Dream”, with bright colors and this creepy characterization of what Apple Pie America was portrayed for many decades in the media until the late 1960s changed all that. Instead of being hand-held, the shots are all static and filmed like an old TV family sitcom. The third act is back to the hand-held, gritty style but with a splash of color here and there. It also has some decent gore moments with people getting stabbed to death and even a bullet to the head moment. It’s also shot with a quicker pace to accentuate the tension of the lab escape and having the characters decide whether going to America is still the plan or not. I definitely want to see more of Guerrero’s stuff because she definitely has a vision and a voice that we could use more in any genre.

The acting is really great as well - probably the best acting I’ve seen in the first season of Into the Dark. Martha Higareda carries the film with super confidence as Marisol, our eyes and ears to this whole ordeal.  She plays every emotional beat naturally and believably. Marisol deals with a lot of traumatic stuff during the entire film and Higareda handles it really well. She also has this strength from the start that just grows. It’s really nice to see and it helps us root for her. It helps that she’s aided by a wonderful supporting cast - including horror legend Barbara Crampton playing a Stepford Wife type with cold, stunning eyes, Shawn Ashmore playing the Mayor of the American utopia with an underlying edge that slowly gets revealed and American Crime’s Richard Cabral as a bad boy immigrant who befriends Marisol and helps her to escape the entire situation. All actors are committed and I bought the entire thing. 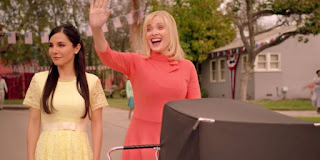 I’ve been kind of on a roll with these Into the Dark installments lately, as CULTURE SHOCK may be the best of the lot that I’ve seen so far. While more of a political allegory than a standard horror/sci-fi movie, the themes presented here about illegal immigration, and this idea of the “American Dream” and how it may not be achievable by everyone who lives in America, are presented in a subtle, interesting way that had me invested from beginning to end. The use of taking elements from other films, like PLEASANTVILLE, GET OUT and THE STEPFORD WIVES, adds to this theme that sometimes a dream is just that and reality hits us in the face so hard that we start to realize that things aren’t usually what they seem at all. And CULTURE SHOCK works that well, thanks to director and co-writer Gigi Saul Guerrero’s voice and vision. The actors - especially Martha Higareda, Barbara Crampton, Shawn Ashmore and Richard Cabral - carry the film strongly on their shoulders and help elevate a controversial theme and make it accessible and understandable to those on both sides of the issue. The final act brings the film down a bit due to the horror and science fiction aspects feeling a bit forced [it’s an Into the Dark installment, after all]. But overall, CULTURE SHOCK is a really good socio-political thriller that has something to say for an audience with a hopefully open mind.