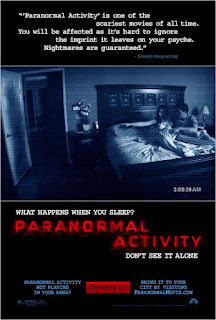 Soon after moving into a suburban tract home, Katie and Micah become increasingly disturbed by what appears to be a supernatural presence. Hoping to capture evidence of it on film, they set up video cameras in the house but are not prepared for the terrifying events that follow. 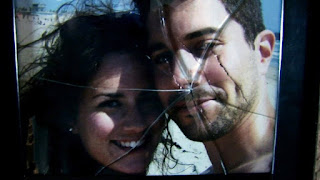 Even though 1980’s CANNIBAL HOLOCAUST and 1999’s THE BLAIR WITCH PROJECT made the “found footage film” a viable sub-genre in horror, it wasn’t really until 2007’s PARANORMAL ACTIVITY [once it was released in 2009 worldwide] that the found footage era of horror really hit its peak. Like many other horror fans, I was curious about the film, even though I’m not the biggest fan of the sub-genre. I watched the film in theaters due to the hype, leaving it feeling indifferent towards it. I never bothered with the sequels and tend to avoid found footage movies unless someone I trust recommends one for me to watch.

After watching a documentary on Shudder called THE FOUND FOOTAGE PHENOMENON, I felt compelled to give PARANORMAL ACTIVITY another chance. Maybe I would appreciate the film more for what it was trying to do. Maybe through older eyes, I would be able to find more merit. Unfortunately, I still felt the same indifference to the movie. But I do get why it became such a phenomenon, even if the film is a bit overrated in my opinion.

Let’s get the good out of the way. I get why some people believe the filmmaking for PARANORMAL ACTIVITY is nothing special in terms of technicality and style. It’s a film mainly filmed on a handheld camcorder that anyone with a smartphone today could make without much of a budget to spare. Director Oren Peli doesn’t use dynamic angles, stylish edits or anything visually flashy to make his film pop. But it’s the simplicity that makes PARANORMAL ACTIVITY work. The film is just footage of a couple dealing with a supernatural force they don’t understand, while handling the situation in different ways. The special effects are just random objects being moved around until the very end of the film when strange things happen. Time stamps on the camera let us know when things are happening. And the rest of the film is just the actors having discussions about what’s going on around them. Just a point-and-shoot type of movie that tells a simple story. Too much style would take away from that, so keeping it simple visually is the way to go. 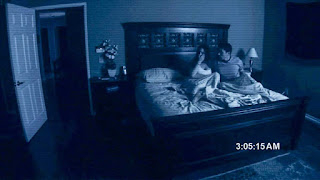 I also found the actors to be believable, especially Katie Featherston and Micah Sloat as the main couple dealing with evil supernatural forces. They come across as a real couple, acting cute with each other at times while bickering as they disagree over how to handle their situation. Featherston’s fear and confusion is convincing, especially as more demonic activity occurs, as Featherston’s performance becomes more frightened and frazzled. Sloat’s performance as Micah intentionally becomes more unlikable as he doesn’t really buy his girlfriend’s supernatural past until things happen, becoming more obsessed and obnoxious as he tries to capture the situation on camera.

Speaking of Micah, it becomes pretty clear that he’s more the movie’s villain than the supernatural entity terrorizing them. PARANORMAL ACTIVITY tends to lose points with me because both he and Katie are not characters you really want to follow or root for about 90 minutes. They’re not all that interesting or fascinating at characters and both make pretty dumb mistakes throughout the film, to the point where they’re just frustrating to watch. But Micah is pretty much a jerk to Katie the entire running time, only having real merit when he reveals that Katie kept her paranormal past from him when they decided to move in together. Still, Micah doesn’t really take Katie seriously when she warns him about not doing anything to antagonize the supernatural force threatening them. He mocks psychics who are willing to help them. He doesn’t want a demonologist coming to the house to fix things because he’ll feel like less of a man if he doesn’t fix things himself. He gets a Ouija board to communicate with the spirit, even though he was warned multiple times by multiple people not to. And he belittles Katie any chance he can get because he feels he knows better than her. 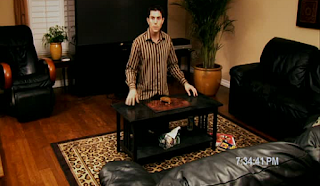 PARANORMAL ACTIVITY isn’t a scary movie and it’s not a film that will elicit nightmares after watching it. But there is something a bit terrifying about a relationship that’s obviously toxic. Instead of supporting and helping the woman he supposedly loves, he ignores all of her warnings and doesn’t take her seriously until it’s too late - meaning when it starts affecting him personally. In fact, the demon seems to be after Micah more than he is after Katie, as if it’s almost protecting her from him in a creepy way. But Micah is more of an antagonist and threat to Katie’s survival than the supernatural evil is.

And while the film isn’t scary, it can also be pretty dull for much of its runtime. While it’s a good thing to keep things simple in terms of the story, it also brings negatives as the story meanders and drags at times until we start to get some demonic action in terms of loud noises and home destruction. Also, I believe we don’t learn about why this demon is so attached to Katie until later installments. So while this mystery is good for audience interaction and potential sequels, it’s hard to connect with any of these characters because we don’t really know much about their backstories other than what’s presented to us on Micah’s camera.

Even the last few minutes of the film are pretty lame, considering it’s there mainly for that last jump scare that doesn’t work on me at all. Other found footage films, like THE BLAIR WITCH PROJECT and REC have done it better. The special effects aren’t all that great in this scene either and take one out of the film. While, on paper, this film could only end this certain way, I don’t think it was all that interesting visually. 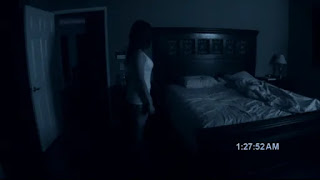 I still feel as indifferent to PARANORMAL ACTIVITY as I did when the film was released over a decade ago. I do appreciate its simplicity in terms of its visual style. I like the actors involved, as they definitely feel like a legit couple bickering over how to handle a demonic spirit that’s haunting them. And while the characters can be frustrating to watch for ninety minutes, I think it’s interesting to see that the real horror is the toxic relationship between them, not the supernatural evil messing with them. It’s unfortunate that the film can be pretty dull and meandering at times, as it’s not scary or creepy at all [in my opinion] with a pretty uninspired “last scare” ending that does anything but. I get why it made so much money at the time of its release and I understand why a franchise was created out of it. But it didn’t do a whole lot for me back in the late 2000s and it doesn’t do a whole lot for me now. As popular as this film has become, there are way better “found footage” movies out there worth watching over this one.