The Watchtower of Justice: The Batman vs. Dracula (2005) 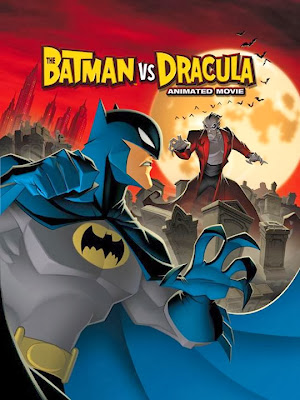 When it came to superheroes during the 1990s, Batman was all the buzz in both cinema and in animation. Coming off the wide success of Tim Burton's 1989 blockbuster hit Batman, and its controversial yet popular sequel Batman Returns, Batman The Animated Series was a dominant success on Fox. The series ran from 1992-1995 and then was revived with a new style on The WB to go along with Superman The Animated Series, which was also done by animation team Bruce Timm, Paul Dini, and many others. In 1997, Batman The Animated Series was cancelled after completing a total of 109 episodes. Still the longest running superhero animated series to date since most animated shows for kids are restricted to having around 65 episodes total now.  After the cancellation of Batman, The WB wanted Bruce Timm and company to make a teenage Batman show for them that would cater to an even younger audience as they thought Batman The Animated Series was a more mature themed series aimed more towards an older audience. This little experiment became known as Batman Beyond, which dealt with an old Bruce Wayne mentoring a teenager who in this futuristic Gotham City donned the Batsuit and played as a spinoff series. Batman Beyond was a nice little surprise that lasted 3 seasons and spawned a movie that brought back The Joker. A few years after Batman Beyond ended, Timm and Dini entered The Watchtower with the amazing Justice League: Unlimited series that brought the most powerful beings in the DC Universe all together. During this time, Alan Burnett who had worked on Batman The Animated Series got together with another team of animation producers to bring Batman back to being a solo TV series again and not be in continuity with the Justice League show. Taking place in Bruce Wayne's 3rd year as Batman, The Batman explored The Dark Knight of Gotham facing many of his twisted adversaries for the first time.  After the show's first season was a success despite many Batman fans hating on it for not being as good as The Animated Series or the character design of The Joker, the producers decided to make an animated movie. After all, The Animated Series saw success with Mask of the Phantasm, Subzero, and Mystery of the Batwoman. With The Batman taking on a much more fantastical direction than The Animated Series yet still being kinda dark and somewhat morbid, they decided to pit The Batman against an equally iconic character who preyed on people when the sun went down: Count Dracula!

The Penguin and Joker have escaped yet again from Arkham Asylum. While The Batman chases after Joker, Penguin ventures out to the old Gotham cemetary in search of gold that may be buried in the catacombs. What Oswald Cobblepot discovers instead is a weird coffin. Penguin opens the coffin and cuts his finger in the process, thus awakening the ancient Count Dracula from his beauty sleep. Dracula places Penguin under his hypnotic spell and makes him his mindless slave. Meanwhile, billionaire Bruce Wayne has started dating the beautiful News reporter Vicki Vale. Soon, Gothamites begin turning into blood thirsty vampires including Batman arch nemesis Joker and Dracula targets Vicki to be a sacrifice in order to bring his wife back to the undead. Can one legend defeat the other?

The Batman was an animated show that I seriously didn't want to give a fair shot to. It wasn't Batman The Animated Series, which still is the best TV series thus far about Batman. Sorry Adam West. But after finding myself loving Beware The Batman after thinking it was going to suck for about a year, I decided to give The Batman another shot, a more open minded shot. And I really dug it. Sure, I still am not fond of Joker looking like a part of Insane Clown Posse, but the show was fun, entertaining, and surprisingly psychological in some episodes especially that Bane episode where Bruce flashes back to that night in the ally and we see Gordon comfort the traumatized youth. Anyway, I had always been intriqued to watch The Dark Knight go up against The Prince of Darkness. Who would win? A mortal billionaire who dresses up as a bat for effect or an ancient evil Count who is cursed to be immortal only by drinking the blood of living beings.

This 84 minute animated feature like the series is a fun time. The vampires are creepy looking. Dracula is awesome. Batman is awesome. Joker gets vamped and looks even more twisted. Vicki Vale is introduced who many Batman fans may remember as Kim Basinger's character in Batman (1989).

I absolutely love the way the opening credits are done, giving this animated superhero/horror show a dark and gothic vibe. The Batman vs Dracula really shows how great of a detective that Batman is as he looks for a cure to vampirism.

The voice cast is good. Rino Romano may not be any Kevin Conroy but I thought he made a decent Batman/Bruce Wayne. Alaistair Duncan fit the role of Bruce's long time loyal butler Alfred well. Kevin Michael Richardson was an odd choice to play Joker, but he did okay although I dug Mark Hamill a lot more. Tara Strong who many remember as Barbara Gordon/Batgirl on The New Batman Adventures era of The Animated Series plays Vicki Vale good enough. Tommy Kenny is perfect as Penguin. Kinda reminds me a bit of Danny DeVito's Penguin voice. And Peter Stomare was creepy as Dracula.

Overall, The Batman vs Dracula is a good Batman film even though there are far better animated Batman films out there. It's a good time for superhero and horror fans alike if you can look past the mere fact that it isn't nor is it trying to be Batman The Animated Series even though the show borrows some characters that were popular on The Animated Series. But, good Batman and vampires movie that doesn't suck the life out of you. Seek it out.