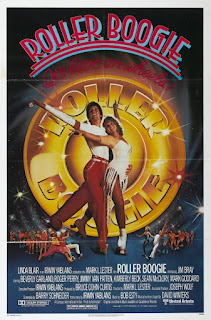 Hollywood has always tried to capitalize on fads going on in pop culture. We had those surfing and beach party films in the 1960s. We saw breakdancing movies in the 1980s. You had the sexy hip-hop dance films of the 2000s. Hollywood sees something popular and wants to pump large amount of money into a film production, thinking moviegoers will consume pretty people doing things some members of the audience have already been doing for a while now. In the late 1970s, Hollywood was stuck on the disco craze, especially if you involve roller skates! Roller disco movies were the rage, man [not really]!

It didn’t matter by the time these films were released, the fad had already died out. In October of 1979, Columbia Pictures had a bomb with SKATETOWN, U.S.A.. Then in 1980, cult favorite XANADU didn’t do great business either, even though the soundtrack was massively successful and both involving the presence of Olivia Newton-John. In between these two films, Linda Blair gave it a try for United Artists with ROLLER BOOGIE - a film that was supposed to capitalize on the craze and on her name as an Oscar nominated actress for THE EXORCIST 6 years prior. Instead, ROLLER BOOGIE became the last big studio project Blair was ever a part of, leading to her status as a B-movie and exploitation star in the 1980s. So what happened?

During the production of these films, disco was met with backlash by rock music fans who saw the genre as derivative and soulless - even though the more popular disco stars were soul singers that attempted to elevate the generic beats into something timeless. The most famous moment was Disco Demolition Night at Comiskey Park in Chicago, Illinois in July of 1979, where  thousands of vinyl disco records were blown up to send a message that “Disco is Dead”. Many saw it as a way to express themselves to bring back “real music” to radio. Others felt it was like a lynch mob based on prejudice, labeling the genre because disco was closely associated with blacks, latinos, and the homosexual culture. Either way, the word “disco” was seen as a bad thing, which probably contributed to the commercial failure of films like ROLLER BOOGIE.

But is the film as bad as many claim it to be?

PLOT
Terry Barkley (Linda Blair) is a musical prodigy who comes from upper class Beverly Hill socialites (Beverly Garland & Roger Perry). While she has great chances of getting into Julliard because of her impressive flute skills, Terry feels neglected by her parents and is rebelling against them. So instead of caring about her near future, Terry and her best friend (Kimberly Beck) head down to Venice Beach and roller skate along the boardwalk. It’s while skating that Terry meets Bobby James (Jim Bray), supposedly the most talented skater in the area who has ambitions to make it to the Olympics. Bobby is smitten with Terry, but due to their different class statuses, Terry wants nothing to do with him. But as she starts getting more attention from Bobby than she does her parents, that slowly changes and Terry wants Bobby to teach her how to skate and win the annual Roller Boogie contest.

Unfortunately, the Roller Boogie contest may not happen. The owner of the rink, Jammer Delany (Sean McClory) is being threatened by mob businessman Thatcher (Mark Goddard) to sell his business. Having overheard this, Terry and Bobby team up with their friends to make sure to save the rink in time for the roller boogie competition. 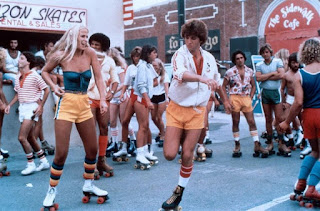 I’m just going to come out and say it - ROLLER BOOGIE is not a good movie. But it does have good aspects that keep it from being the bottom of the barrel. I think without the soundtrack, ROLLER BOOGIE wouldn’t be worth the discussion. But thankfully, the music in the film is very good and epitomizes the tone and atmosphere the film is trying to convey. Released by Casablanca Records, the soundtrack was mostly written directly for the film by Bob Easy and Michelle Aller - the duo responsible for Cher’s big disco hit from 1978, “Take Me Home”. The duo would later produce Cher’s 1979 album, Prisoner. It didn’t sell well, although the opening song of ROLLER BOOGIE, “Hell on Wheels”, is from that very album.

I personally think “Hell on Wheels” is an underrated Cher banger that’s a mix of disco and rock - working well to set the tone of the film. We also get Earth, Wind and Fire’s “Boogie Wonderland” [featuring The Emotions] during a roller skating scene inside the rink. And Bob Easy himself performs a few songs, including one by Roger Hodgson called “Lord Is It Mine” that’s including on Supertramp’s Breakfast in America album. The other disco songs are actually pretty good as well and help build a time capsule that ROLLER BOOGIE easily creates.

It also helps that ROLLER BOOGIE showcases many scenes of people roller skating to the soundtrack, making you want to go to a skating rink and lose yourself to the music. Mark L. Lester, who would later direct cult classics like CLASS OF 1984, CLASS OF 1999 and the immortal COMMANDO, visually handles himself well during these skating montages that highlight a time that’s long gone 40 years later. Like other music movies, the visuals elevate the audio and vice-versa. You definitely see the appeal of the roller skating culture and why Hollywood felt fit to capitalize on the fad. What’s the point of a film called ROLLER BOOGIE if there aren’t many moments of people boogieing on roller skates?

Speaking of Lester, ROLLER BOOGIE may be one of his lesser films as a director. But he still manages to keep a good flow going for 103 minutes, as things are always happening even if these things aren’t particularly good or interesting some of the time. The film is also very colorful and makes you wish you could look and hang out like these California people. The film is made to look even better due to cinematographer Dean Cundey, best known for his work on many John Carpenter films such as HALLOWEEN, THE THING, and THE FOG. For a goofy movie, the visual production is definitely top-notch. 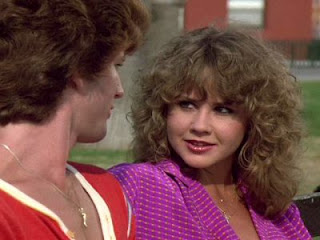 And while the acting and plot are both pretty bad, at least they make the film unintentionally entertaining. The Romeo & Juliet love story is dumb. The mob subplot feels like a C-list Scooby Doo episode. And the acting and dialogue are just atrocious. I mean, Bobby is a great roller skater because he’s planning on competing in the Olympics.

Does he not know that roller skating was never a sport at the event?

And the dialogue couldn’t have been written by anyone older than ten. When Linda Blair has her big acting moment with these words, “What a drag! What a bummer!” while her movie mom is pouring multiple pill bottles out of her purse, you know you have something special here. A mess of a film, but an entertaining one for all the wrong reasons.

Plus - a lot of attractive people in this movie. Linda Blair and Kimberly Beck look super hot in this. The late-70s were sure a magical time.

Back to what I wrote before, ROLLER BOOGIE is a terrible film in terms of its acting. It’s all amateurish at best, as if the actors were instructed to act as if they were starring on a sitcom rather than in a major motion picture. Jim Bray, a legit roller skating legend, has an excuse for his goofy and wooden acting since it’s not his forte. But even Linda Blair seems out of it here, not showing us the performance she’s capable of. Maybe it’s the material or the direction she was given, but Blair doesn’t do a whole lot but look great roller skating. Maybe that’s all she was hired to do, but she could have elevated the film with a decent performance. Sure, it’s funny. But I could see people just rolling their eyes at these performances. 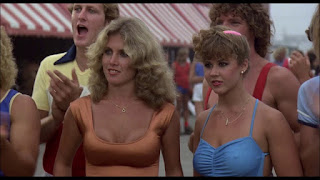 The story is even worse. The roller skating stuff is fine, but everything else struggles. The love story between Terry and Bobby is portrayed oddly, never letting the audience really connect with the characters or their budding romance. The class differences between the main characters is never really developed and just used for slapstick moments. And halfway through the film, there’s this subplot with some mafia guys threatening the owner of the roller rink that leads to some Scooby Doo shenanigans that never feels as fun as the aforementioned cartoon. It’s as if during the plotting of this film, the producers realized they couldn’t have a 40-minute long film with just roller skating scenes - forcing the rest of the runtime with plot points that feel more like filler than something actually substantial. Been there, done that, and done better.
And probably the thing that hurts the film the most is how dated it is. If you don’t care about roller skating, disco music, or anything from the 1970s - this film won’t probably appeal to you. Even if you are into those things, you still may not be interested due to the film’s obvious hokeyness. While ROLLER BOOGIE belongs in a time capsule of a seemingly more innocent time in 1979, it’s nowhere as timeless as many other films of the decade. Either you get it or you don’t, which greatly divides who this film is attempting to appeal to. 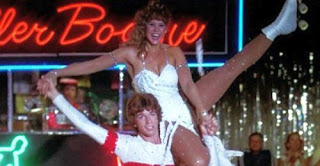 ROLLER BOOGIE is a film that will definitely be embraced by some for its silly premise and the appeal of watching Linda Blair and other good looking folks roller skate to disco music. For others, they’ll just watch Linda Blair in THE EXORCIST because it doesn’t have roller skating or disco music. While the acting isn’t great and these dumb subplots involving mob bosses, Olympic dreams that aren’t possible and a cliche love story between two people of opposite class statuses don’t work as much as the producers probably thought they would, at least they’re unintentionally entertaining for all the wrong reasons. And the soundtrack is pretty damn good, and the visual presentation of the roller skating sequences are done well. This film is definitely not for everyone, but I do think it’s worth at least a look if you can appreciate pop culture fads that capture a much different time than today.