Doctor Strange In the Multiverse of Madness (2022) 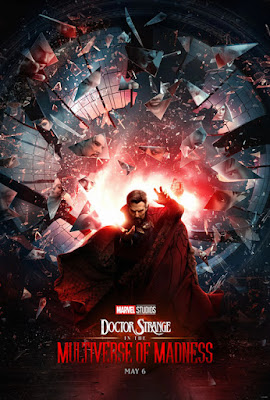 Doctor Strange (Benedict Cumberbatch), with the help of mystical allies both old and new, traverses the mind-bending and dangerous alternate realities of the Multiverse to confront a mysterious new adversary. 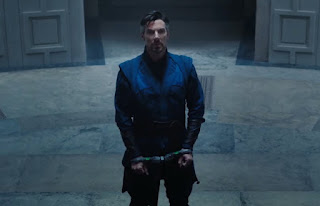 After 15 years of not directing a Marvel superhero film since 2007’s SPIDER-MAN 3, Sam Raimi returns to the genre with the latest MCU Phase Four feature - DOCTOR STRANGE IN THE MULTIVERSE OF MADNESS. MCU’s Phase Four seems to be heavily focused on the multiverse, judging by the stories told in WandaVision, Loki and SPIDER-MAN: NO WAY HOME. While DOCTOR STRANGE 2 definitely wants to ride the success of those projects, it’s unfortunately not the best film with that theme. Hell, it isn’t even the best film this year about multiple universes (EVERYTHING EVERYWHERE ALL AT ONCE says hello). But luckily, DOCTOR STRANGE 2 brings up the quality of Phase Four compared to other films included such as BLACK WIDOW and THE ETERNALS.

Marvel promised us a horror film in DOCTOR STRANGE 2 and while it’s never a scary film at all, the imagery that Sam Raimi presents throughout the film are definitely callbacks to his EVIL DEAD franchise, as well as certain elements from DRAG ME TO HELL. And visually, DOCTOR STRANGE 2 is one of the more memorable in the MCU catalog because of it. From possessions, to hideous looking ghouls, to evil mirror reflections and demons and to certain characters looking and acting like zombies, DOCTOR STRANGE 2 has a lot of horror elements that might turn off younger audiences and squeamish viewers. And superheroes actually get murdered in this movie, some in really messed up ways. Marvel and Raimi really pushed that PG-13 rating with some of the film’s brutality, which even surprised me at times considering this is a Disney property.

The cast is really great in this film - in particular both Benedict Cumberbatch and Elizabeth Olsen, who can play their respective roles of Doctor Strange [all of them] and The Scarlet Witch in their sleep at this point. Olsen, especially, is amazing in this film playing through so many emotional beats and making each one of them believable. Newcomer Xochitl Gomez does well with what she’s given. And returning actors Benedict Wong, Rachel McAdams and Chiwetel Ejiofor have memorable moments. I also enjoyed the cameos, although I wish they were in the film more.

Even though I missed Michael Giacchino’s score from the first film, I thought Danny Elfman captured the atmosphere and tone of the film’s story.

The narrative could have been stronger, as it felt too rushed at times. The film was supposed to be about 35 minutes longer, which makes me wonder what was cut out or reshot as replacements. There were times where you can tell a scene was edited a bit, as it felt a bit incomplete. I also think those lost minutes could have been used for more character development, especially for America Chavez. I also felt that Rick and Morty and Loki scribe Michael Waldron had some cheesy dialogue that didn’t quite work [especially for America Chavez] as well as writing for certain characters that made me think he didn’t watch some of those Disney+ shows that connect to this movie. I also felt the Illuminati stuff could have been longer and felt more important, and what’s the point of a Multiverse movie if you don’t do more with that concept? What we got was pretty neat, but I felt it was more of a teaser for something in the future more than anything. I did dig the mid-credits scene a lot however, as it promises to be a more Doctor Strange type movie that doesn’t deal with any Avengers. So I’m really looking forward to the future. 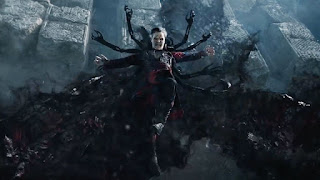 DOCTOR STRANGE IN THE MULTIVERSE OF MADNESS is a flawed movie, but it’s also a very entertaining one. I can see why some didn’t enjoy it as much as I did. Sam Raimi has a certain style that doesn’t cater to everyone, although I feel it helped this film quite a lot. I think Raimi should have wrote the film to make it even crazier, honestly. It also requires audiences to watch a couple of the Disney+ shows to really understand what’s going on with some of the characters. But besides the muddled screenplay and some of the VFX that look like a video game, the acting is great [Elizabeth Olsen needs her own Scarlet Witch movie for sure], the action is pretty cool, the horror elements and brutality even surprised me in a good way and Raimi’s cool nods to previous films in his filmography added a different feel and tone to this MCU property. I don’t think the film matches the hype, which is unfortunate, but it’s one of the better Phase Four films so far and looks to present a more interesting sequel that will cater to comic book Doctor Strange fans. Not a bad way to start the Summer Season.