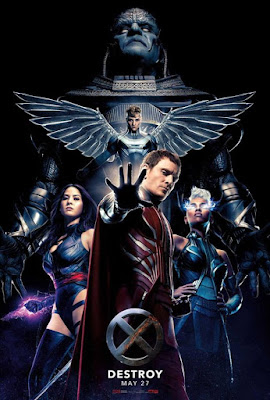 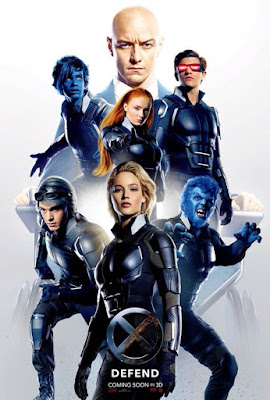 PLOT
Ten years have gone by since the events of DAYS OF FUTURE PAST - Professor Charles Xavier (James McAvoy) has turned the School for Gifted Youngers into a place for mutants to embrace their powers and be educated at a safe place. Mystique (Jennifer Lawrence) is now considered a mutant hero, even though she refuses to live her life that way. Magneto (Michael Fassbender) has started a new life in Poland with a wife and daughter.

While they are trying to build new lives for themselves, the resurrection of the first and one of the most powerful mutants, En Sabah Nur/ Apocalypse (Oscar Isaac), bares potential for armageddon as he wants pure world domination. He gathers his Four Horsemen - Storm (Alexandra Shipp), Psylocke (Olivia Munn), Angel (Ben Hardy), and Magneto [whose wife and daughter are murdered after his past is unfortunately revealed]. Apocalypse decides to use Xavier as a conduit to let everyone in on his plans, as well as preserve Xavier’s body for a transfer to maintain his corporal form. Now led by Mystique and Beast (Nicholas Hoult), they recruit a new set of X-Men - Cyclops (Tye Sheridan), Jean Grey (Sophie Turner), Quicksilver (Evan Peters), and Nightcrawler (Kodi Smit-McPhee) - to combat the new threat and stop the world from being turned into Apocalypse’s image. 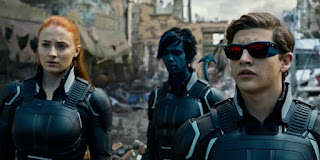 There are too many cast members to go through, so I’ll just highlight a few. Michael Fassbender, James McAvoy, Nicholas Hoult, and Jennifer Lawrence all return, being able to play their respective roles in their sleep. Fassbender, though, is the star of this bunch. He’s given the best material, crafting a fully dimensional character whose tragic life influences his decisions, both good and bad. Fassbender captures every single emotion perfectly throughout the film - his happiness when he feels normal, his sadness and anger when his world is taken away from him by accident, and his regret when he begins to realize that destroying the world around him is not going to change the past and take away the pain. Just really great stuff. Lawrence plays Raven more than Mystique [she must have gotten tired of the make up], but she does well. Hoult is still funny as the geeky Beast, while McAvoy is still the conscience of the film as Xavier. Add in Rose Byrne as the returning Moira MacTaggert, who doesn’t remember her role in FIRST CLASS to amusing moments, and you got a solid crew here.

For the new crew, Sophie Turner is pretty great as Jean Grey, playing the character as stoic and wise beyond her years while afraid to unleash the full potential of her powers. Kodi Smit-McPhee is a surprising delight as Nightcrawler, being the comic relief of the film and working very well with the other actors. You’d really believe he’d grow up to become the Alan Cumming version of the character from X2. Alexandra Shipp is a more believable Storm than Halle Berry ever was, even though Shipp unfortunately doesn’t get more to do. Olivia Munn looks great as Psylocke, but not much else. But she handles herself well during the final act.

Evan Peters returns as Quicksilver, expanding his character in a way that will probably be important in future installments. He’s part of another X-MEN film highlight, and you can tell he’s having a blast playing the character. And Oscar Isaac is a good Apocalypse, although I wish his character was more than just “I want to conquer the world now” villain. Still, he carries himself very well in the role and I liked that he tried to ham it up a bit. I still think he was a great choice for the role, but the script could have handled the character a bit stronger. 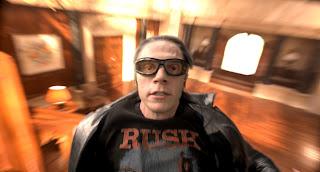 I will admit that the middle portion does drag a bit somewhat. Plus there are multiple scenes with Mystique and Nightcrawler teleporting that ruined the flow and pacing for me during the first act, making me question when the hell these scenes were taking place since the rest of the film was moving forward in time. But overall, I thought Bryan Singer did a commendable job juggling a vast amount of characters and keeping it coherent for the most part. 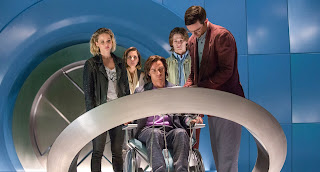 It also didn’t help that a lot of characters didn’t get much development, due to the amount of them. What is Psylocke’s story? How come Angel was portrayed much better in THE LAST STAND than here? Why not explore Storm more? I also kind of wish Apocalypse had appeared in previous films, just to establish him as a more epic and dangerous villain. He mostly just stood around for the most part. Marvel has an issues with their villains in these films, and APOCALYPSE is no exception. Still, I had fun with the narrative, even if it has been done to death. 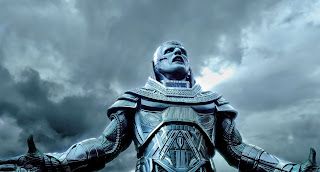 Not everyone is going to like X-MEN: APOCALYPSE. Some might find it too long. Some may think the actors and/or characters were wasted. The CGI won’t work for everyone. And yes, the narrative is pretty cliche and tired by this point. X-MEN: APOCALYPSE is definitely a flawed film that has nagging issues you can’t ignore. But even so, I had a lot of fun with this film. It felt like a comic book brought to life, with colorful characters and performances that I found enjoyable. Plus, it sets up new stories that could be really great if the right people are involved. It’s disappointing as a follow up to FIRST CLASS and DAYS OF FUTURE PAST. But as a popcorn flick for the Summer Movie Season, I was into it. I didn’t expect much out of this film based on the trailers, but I came out of it pretty satisfied. Not a complete success, but I was entertained. And that’s all that matters sometimes.