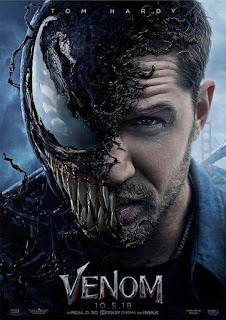 PLOT (From IMDB):
When Eddie Brock (Tom Hardy) acquires the powers of a symbiote, he will have to release his alter-ego “Venom” to save his life. 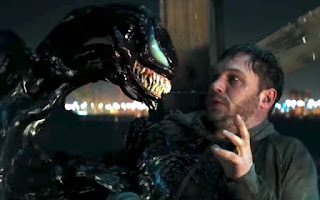 Even after the terrible usage in SPIDER-MAN 3 and the licensing of Spider-Man from their studio to the Marvel Cinematic Universe, Sony decided to continue with their “Spidey-Verse” with the release of VENOM - a solo venture featuring one of Spider-Man’s more famous foes and resident anti-hero of the Marvel Universe in general. While the lack of Spider-Man involved in Venom’s origin left me feeling less than motivated to watch, the casting of Tom Hardy as Eddie Brock did leave me intrigued as I’m a fan of his work. But you know me - I’m going to watch any comic book related movie in a theater, so VENOM was always going to be on my radar. I wasn’t expecting much out of the film and the bad reviews didn’t help to persuade me that I was going to waste my money watching this. And while VENOM is definitely mediocre and forced at times at what it’s trying to accomplish, I couldn’t help but enjoy myself throughout. It definitely has serious issues, but I thought VENOM was more fun than it had any right to be.

The main reason VENOM may be worth a recommendation for superhero genre fans is for Tom Hardy as Eddie Brock. Hardy seems to be really enjoying himself in the role, acting like a schizophrenic with an alien voice in his head while doing some cool stunt work. He also plays Eddie like a human being, flawed and all, wanting the big scoops as an investigative reporter that end up costing him not only his job, but the love of his life in the process. The human moments for the character seem to be where Hardy thrives the best, creating a three-dimensional character that we can identify with and support throughout the film. And when he actually becomes Venom, his behavior becomes more erratic and he has hilarious dialogue with his alien counterpart. Hardy could have phoned it in for a paycheck, but you can tell he’s one-hundred percent invested in giving us a great performance and to lead a franchise. He definitely made me forget about Topher Grace’s unfortunate performance from eleven years ago.

And while the screenplay isn’t anything to write home about and the direction as generic as they come when it comes to this genre, at least both aspects are memorable enough to be entertaining. Whether it’s in a good or a bad way, that’s up to the viewer. But I friggin’ had a blast at the cheesy dialogue, the silly action sequences, the better-than-expected special effects [Venom and the symbiotes looked cool], and the hammy acting by everyone involved. It felt like a B-movie from a different era and I was more than okay with that. Sometimes I don’t want to think while watching a film, and VENOM allows that in spades.

VENOM is nowhere close to perfect though. The story itself is totally contrived and cliche, the dialogue is ridiculous a lot of the time, and the villain is stereotypical as hell [the idea to recreate the world in his own image like a God] even though he starts off more interesting than he how he ends off. Things just randomly happen without explanation, leaving one feel that there was more to this film but was edited off for some reason. As I later learned, over 40 minutes of footage was cut - I guess to save later for a blu-ray release. You can really tell, since VENOM does feel disjointed every now and then, making for a strange pace that still kind of works for some reason. And the final act is pretty weak to be honest, even if the action element was pretty okay.

I also thought some of the actors, especially Michelle Williams, seemed to be forcing her performance. I didn’t really buy her all that much and seemed to try too hard. She didn’t feel like a real character to me, but rather an archetype of the love interest that had to be inserted to give Eddie Brock some motivation. She’s definitely a better actress than what she portrays in VENOM, as she seems to having trouble trying to keep up with the comedy and with Tom Hardy. Maybe it was the material she was given. Maybe she just did the film for a paycheck. Either way, she stood out a bit because I don’t think she took the role seriously enough for most of the movie. Some of the other actors had a similar issue to varying degrees, but Williams was the most high profile. 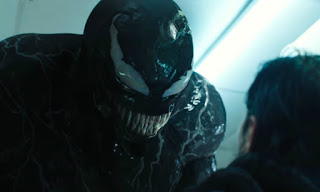 Even with its issues, VENOM turned out better than it had any right to be. Yes, it’s not a good movie. Yes, the story is cliche, predictable, and really dumb. The obvious edits create some pacing issues and most of the actors seem to be forcing it and trying too hard. And it’s weird not having Spider-Man be part of the character’s origin, as he should be honestly. However, VENOM still manages to be an entertaining film that never bores you, regardless of its problems. And Tom Hardy is excellent as Eddie Brock, finally giving the character the portrayal we all wanted since 2007. It looks and feels like a B-movie and I had fun with it. And with the $200 million-plus worldwide gross the film has already received, we’re definitely getting more of this universe - with a long anticipated villain that will hopefully be done justice to. Not the superhero film of the year, but still worth a watch if you want something silly and dumb for two hours.