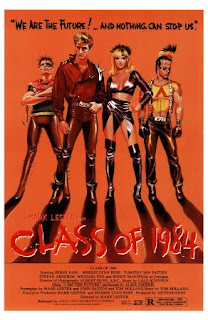 
The idea of "It's Cool to Stay in School" seems harder to fathom these days. In between all the sex scandals, gang violence, bullying, and overcrowded classes, school seems to be about everything other than learning. How ironic is that a Canadian exploitation thriller from 1982 called CLASS OF 1984 would get it right about the future of education? And while CLASS OF 1984 is dated in terms of fashion and music, the theme of high school violence has never been more powerful and relevant.

PLOT
In 1984, music teacher Andrew Norris (Perry King) is shocked by the events of his new school, Abraham Lincoln High. He sees students passing through metal detectors, exchanging weapons in broad view, selling drugs, and scaring the faculty - some to the point that they bring guns in their briefcases. While Andrew attempts to teach as well as he can under these circumstances, a group of punks led by Peter Stegman (Timothy Van Patten) begin to make Andrew's life a living hell. They vandalize his car, beat him up, and even rape his wife (Merrie Lynn Ross). It's when a man is pushed to the limit that the real lesson begins...

REVIEW
CLASS OF 1984 may have seen farfetched for 1982 standards, but in 2010, the reality of this movie couldn't be more true. Sure, the film is B-movie 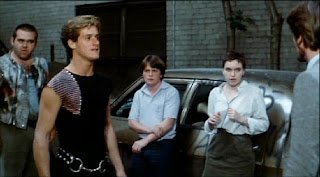 exploitation, but looking at it now [especially after Columbine and other violent school incidents], it's a portrait of things to come that actually came true. Written by director Mark L. Lester, John Saxton [HAPPY BIRTHDAY TO ME], and Tom Holland [FRIGHT NIGHT, CHILD'S PLAY], CLASS OF 1984 has actual political and social messages that are told seriously [with a bit of camp] without the messages being too heavy-handed.

There's so much in this film that reflects society. We have parents who are clueless, or better yet, in denial about who their children really are. We have teenagers vandalizing their town, selling drugs, and bullying others to get their way. We have white-on-black crimes that are pretty racist at times. We the police who are too afraid or lazy to anything about these crimes due to "lack of evidence", looking away rather than stopping it. The society in CLASS OF 1984 breaks all the rules, creating nothing but chaos until even the "best" citizen has to go against what he believes in just to survive. The fact that Lester, Saxton, and Holland wrote a film that reflected things to come is truly interesting and actually kind of scary.

The characters are all written distinctively and are developed enough in a film like this for us to relate to them. We all have an Andrew Norris in all of us, wanting to do the right thing and help others - only to be taken advantage of and pushed to the point where violence is the only way to be heard. His de-evolution from normal music teacher to vigilante is done believably. In fact, his fellow teacher Terry Corrigan [who has already de-evolved to the point of madness] is really Andrew's future self. Terry is the man Andrew will become due to these messed-up students until he puts a foot down and stops it from getting that far.

And when it comes to the villains, it's a good thing that the writers made them all different instead of interchangable like in most modern films of this kind. Peter Stegman is the ringmaster who acts like a mob kingpin by controlling the high school drug and prostitutio 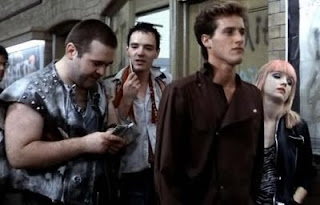 n rings. Drugstore is the comic relief of the gang; always strung out and making you wonder if he's using more than he's actually selling. Fallon is the muscle of the group who beats people up. Barnyard is the silent fat guy who uses his size to intimidate others. And Patsy is the annoying, vocal one. They're all stereotypes, sure, but at least they're stereotypes with personality. And while the things they do are viciously horrible, you can't really blame them entirely. The fact that Stegman's mom is too busy wanting to find a man rather than seeing her son for who he really is shows that the parents are just as much to blame as the children. In fact, Stegman's mom is the only parent we see in the film, which shows how insignificant their roles in this society have become. So while Stegman's gang deserve to be punished for their crimes, it started with their parents, or lack thereof honestly.

Mark L. Lester, who would later direct the classic 1985 COMMANDO and the sequel to this film, CLASS OF 1999, does a very good job handling the material. It's mainly straightforward in terms of style and editing, but it gets the job done just the same. In fact, I thought he handled the subtle, quiet moments of drama really well. And I love the revenge stuff in the last act of the film, where the gang begins to get their "detention" in the worst ways. From limb detachment, to pyromania, and to a hanging, Lester shoots it all well. Plus I enjoyed a lot of mise-en-scene when it came to the grafitti on most of the walls. They seemed to serve as messages to things that were happening or were about to happen. I thought it was a nice touch.

The acting is pretty good. Perry King does well as Andrew Norris, giving us a character we connect with. When he becomes frustrated, angry, and vengeful due to the dilemmas these punks put him in, we totally believe in his actions. Also, a lot of actor 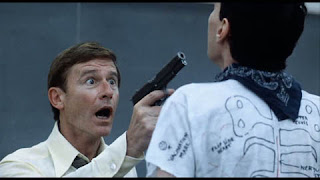 s who play "good guys" tend to force it. King seems genuine and it's hard not to root for him. Roddy McDowall is definitely the best actor in the film, giving us a convincing performance of a man driven to the point of insanity. He drinks on the job, relates more to his biology animals than his students, and carries a handgun with him for protection. His scene inside the classroom where he forces the punks to answer his questions correctly, or else he'll shoot them, is probably the highlight of the movie. It's tense, it's suspenseful, and it's all because of McDowall's unhinged performance. Timothy Van Patten does okay as Stegman. He plays the villain role a bit over-the-top and quite hammy, but it's sort of entertaining at the same time. And we have a pre-Family Ties Michael J. Fox as a chubby music geek named Arthur. He doesn't really exhibit the performer he would become later, but it's interesting to see where he started from.

THINGS I'VE LEARNED WHILE FALLING DOWN FROM A FLAGPOLE

- Due to some vandals, Abraham Lincoln High School has a "Fuckuty Parking Lot". Apparently in the 1980s, the Emancipation Proclamation referred to freeing your willy instead of freeing the slaves.

- "If you want to survive around here, you have got to learn to look the other way." True, but when you look back, that bus hits you and squashes you like a bug. So either way, you're screwed.

- The easiest class in school is music. It's the only class where you can get an A legally by blowing well for your professor.

- Stegman's gang sprayed stage blood in Andrew's face, even though his wife had no idea what it was. That's understandable. Anything's that shot onto her face is usually white.

- Terry held his students at gunpoint. When you lived with all those damn apes on that stupid planet, you'd go nuts too.

- Terry tried to run down Stegman and his gang. Talk about having a FRIGHT NIGHT!

- Stegman and his gang raped Andrew's pregnant wife. At least they won't have to go to Maury to see if they're the father. 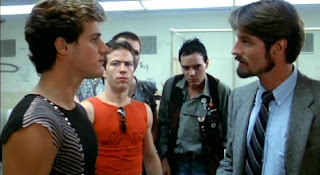 CLASS OF 1984 is a film that is ahead of its time. If you like dramas about delinquent students mixed with a bit of DEATH WISH and A CLOCKWORK ORANGE, CLASS OF 1984 is the way to go. It's everything you'd want in an exploitation flick: violence, sex, foul language, camp value [the Alice Cooper theme song alone fits this bill], and even a serious message beneath it all. In 1982, the future of education was inner-city violence, metal detectors, and the disinegration of society as a whole. I guess Stegman and his gang really were the future...