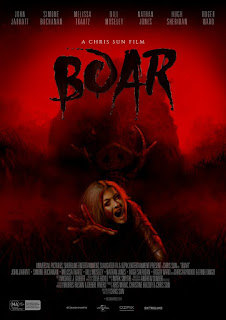 PLOT (from IMDB)
In the harsh, yet beautiful Australian outback lives a beast, an animal of staggering size, with a ruthless, driving need for blood and destruction. It cares for none, defends its territory with brutal force, and kills with a raw, animalistic savagery unlike any have seen before. 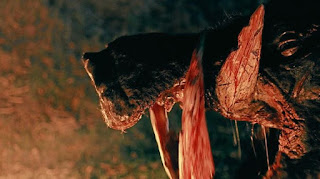 With Animal Summer pretty much coming to a close this year, I wanted to tackle not only a film I hadn’t watched before, but also an animal I haven’t really covered for the event. With so many shark, feline and insect features out there, it’s refreshing to cover a movie like the 2017 Australian film BOAR. There aren’t many animal run amok films dealing with dangerous pigs or hogs, so BOAR became a must see. Unfortunately, BOAR left a lot to be desired even if it does have it moments.

BOAR is pretty much a slasher film with a giant wild hog stalking and killing people on an Australian farm and its nearby woods. Honestly, the film isn’t much more than that, making it a bit of a disappointment. It’s cool that we have a different animal as the focus of the terror and drama for the story. But the human characters don’t have much depth until it’s really too late, making it difficult to latch on to any of them. Some have more personality and charm than others, sure. But a majority of the major players in the film are there for nothing more than to build the body count for our title character. It’s sad because some interesting characters would have added to the tension and drama that the narrative really needed. But it appears the filmmakers were more focused on how the boar looked like and the carnage it could create rather than for the audience to identify with anyone they’re watching so we could care whether they lived or died.

The film is oddly structured, in that it introduces us to what we believe are the main characters in the first act, pretty much ignoring them during the middle act, only to present them again during the film’s last act. These characters are a family [mom, step-dad, daughter, son and daughter’s boyfriend] who are visiting the mom’s brother, who runs the family farm where the boar is now terrorizing without their knowledge until bodies start popping up. The family dynamic has some interesting things going for it at times. The younger brother they visit, Bernie, is this giant of a man who looks intimidating but is really gentle, heroic and knows every lyric to Vanilla Ice’s “Ice Ice Baby”. The stepfather is respected and loved, which is pretty rare for a horror film. The boyfriend character is a bit of a jerk and acts tough, only until real trouble stares at him in the face. Other than that, there’s not much to these people that makes me care to watch 90 minutes of them. It doesn’t help that we miss a chunk of their reunion and interactions because they don’t appear in the middle of the film, making me wonder if the filmmakers had forgotten they even existed until they appeared again. It’s frustrating. 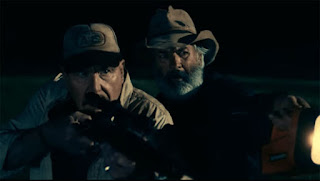 There are other characters sprinkled throughout, but not many make an impression but a few. The main ones are Ken and Blue, two best friends who enjoy getting drunk while watching over the farm and its surrounding areas. These two characters had genuine comical conversations and felt like two people who knew each other for a very long time to explain their easy rapport. Unfortunately, they’re not in the film enough to really justify how well written these two are, but I was happy to have them. The other character is Sasha, Ken’s bar owner daughter, who has a ton of sass and attitude that made her more attractive than she already is. Her character pops up here and there when the film needs her most, making her pretty convenient if you ask me. But I liked her character, so it could have been worse.

The main issue with the narrative is that the script focuses on too many stories going on at once. I get that you need the boar to scare and murder people to build to a final confrontation. But when you introduce a group of people that are probably going to be the main survivors of the film, just to toss them away for 25 minutes for random bloodshed, the film loses its flow and our care towards these main characters is destroyed because now we have to build it up all over again. There’s no real reason why the film couldn’t have had these characters remain on screen in a consistent basis while the boar did its thing to other people. It’s just strange how it was structured and took me out of the film for a bit.

What BOAR does have going for it is the look of the title character itself. I thought the giant boar looked pretty great, considering it’s obviously a puppet or animatronic creation that looked as realistic as possible. I don’t think I barely saw any CGI for the monster at all, making me appreciate the level of detail and dedication to the boar. It also helps that director Chris Sun [who also co-wrote the film] doesn’t show the boar all that much until the final minutes of the film, making what it does and what it looks like way more effective than it has any right to. I’m guessing the lack of character depth was sacrificed to focus more on the monster. It’s disappointing for the humans, but the animal looked pretty cool.

Speaking of Chris Sun, his direction was above average. I criticized his pacing and flow already, hurt by the script and not helped by the direction either. BOAR felt like many short stories in one, which took the film down for me. But Sun also does neat tricks with the boar, including giving it his own cool looking first person point-of-view that has this reddish-orange tint that swirls and looks distorted. I also thought the film looked quite nice visually, making the Australian location look beautiful in both day and night. And the highlight of the visuals are the death sequences. Unfortunately, probably due to budget restrictions, a lot of the deaths and mauling done by the boar are done offscreen. But we do see some gory aftermath with a lot of blood, mutilated bodies and organs, as well as a tusk going through a person from the back of their skull out of their open mouth. The final act of the film is where we really see a lot of the action, as the boar drags people away and attacks everyone in sight. It’s probably the best part of the film, to be honest.

The acting also elevates BOAR thankfully, as the actors all seem to be having fun and taking the whole premise as seriously as possible. I believe BOAR gained recognition due to its stunt acting of having Bill Moseley, John Jarratt and Roger Ward involved with the project. All three men are definitely highlights, with Jarrett and Ward having some nice comical and tense moments as Ken and Blue. Moseley does a good job as the family’s stepfather, but any actor could have played that role honestly. But he definitely has name value in the genre, so it was smart to cast him in a pretty normal role. Melissa Tkautz is also cool as bar owner Sasha, displaying a lot of tough attitude. She makes Sasha one of the more likable characters. Hugh Sheridan plays the daughter’s boyfriend, Robert, in such a douchebag way that he’s actually quite amusing. I also loved his switch in character towards the end, as Sheridan played it totally believably. But the real star here is former WWE wrestler Nathan Jones as Bernie. Usually playing a villain in films, his turn as the film’s hero is quite a surprise. And he’s a decent actor to boot! He has a charm and likability factor about him that made him easy to root for by the film’s end. The guy wasn’t much of a wrestler despite his size and presence, but he’s made a pretty successful transition to film. Good for him! 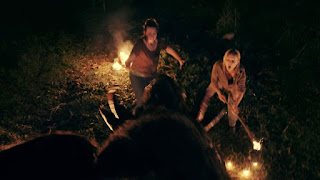 BOAR is a film I was expecting more out of, but only ended up feeling a bit disappointed by the movie’s end. The title character looks very cool, considering the boar was mostly created with practical effects and only shown mainly in the film’s last act. Some of the visual techniques by director Chris Sun were nice, including the boar’s first person point-of-view moments and some of the film’s gory death sequences. The acting [headlined by Nathan Jones, Bill Moseley, John Jarratt and Roger Ward] do a very good job elevating a pretty mediocre script by taking their roles seriously and adding some much-needed star power. Unfortunately, the screenplay tries to tell too many stories at once, taking away much needed focus for the main characters from the middle of the movie - in which they don’t appear in at all - to give time to random characters getting murdered by the titular boar. The characters don’t have much depth to them either, only getting a bit of character when it’s too late to care. I get it’s a slasher film involving a killer pig targeting dumb humans, but even dumb humans need a personality and something for the audience to latch onto. BOAR ended up to be pretty average by the end credits, but it’s nice to see a different animal getting its chance to be a horror villain that’s not a shark, a cat or an insect. That alone makes BOAR worth a peek, even though I’ll probably skip this plate of bacon if it’s ever offered up to me again.