**This was originally written for Fangoria.com. You can read this article here.** 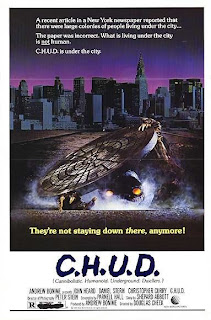 Living just minutes from New York City, there’s not one day when I haven’t encountered a manhole leading down into the sewer system. Sometimes, I see smoke coming out of one, or hear noises, mostly a train passing through—and I’ve become fascinated by the idea of who or what might be lurking underneath. As children, many of us believed the sewers were ruled by the Teenage Mutant Ninja Turtles—but I think they were really conquered by the Cannibalistic Humanoid Underground Dwellers, better known as C.H.U.D.s. 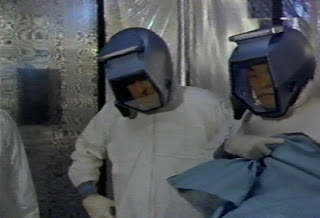 H.U.D. is a throwback to the monster movies from the 1950s. As the story opens, strange things are happening in New York City. The homeless have been disappearing; citizens walking their dogs or taking their children home are becoming the latest subjects of missing-persons reports. Police captain Bosch (Christopher Curry) begins to investigate with the help of The Reverend (Daniel Stern), who runs the local homeless shelter. After finding instruments used to measure radioactivity in the sewers and checking out photos taken by fashion photographer George (John Heard), Bosch comes to believe there’s a cover-up led by his superiors and Wilson (George Martin), who works for the Nuclear Regulatory Commission.

Wilson, under pressure, confirms that the culprits are C.H.U.D.s—homeless people in the sewers who have evolved thanks to dumped nuclear chemicals into monsters with glowing eyes and an appetite for human flesh. Amidst a power struggle between the authorities, and with a lack of food underground, the C.H.U.D.s leave the sewers to prey on the upper-dwellers.

Made for $1.25 million and grossing a little over $4.5 million, C.H.U.D. is a considered a cult classic by many horror and sci-fi fans. The audio commentary on Anchor Bay’s DVD provides information about what occurred behind the scenes, often in very funny ways. C.H.U.D. was created by Shepard Abbott, who came up with the title at a party with actors John Heard and Daniel Stern. The three of them brainstormed the movie, for which Abbott wrote a very rough draft—since he had never written a screenplay before—and it was passed on to producer Andrew Bonime.

Bonime, not satisfied by the script or Abbott’s subsequent rewrites, fired him and gave it to writer Parnell Hall. Stern and Heard were unhappy about this, and what Hall did with the script. Having already agreed to work for scale plus a percentage of the profits, Stern and H

eard decided to rewrite 50 percent of the screenplay themselves and ad-libbed most of their dialogue. Also, they refused to work on the film unless actor Christopher Curry and director Douglas Cheek were hired. After a hellish preproduction, Bonime agreed and C.H.U.D. was born.

Having rewatched it for the first time since my youth, I never realized how non-horrific C.H.U.D. really is. It’s not scary. We don’t truly see the monsters until the film’s last act, and it moves slowly in order to develop the characters somewhat and explain (with more expository dialogue than probably necessary) what’s going on. Still, though it might turn off modern horror fans, it’s a fun homage to those creature features past that told their stories in similar fashion. Plus, it doesn’t try to push its message about the state of the environment, and the politics behind it, to the point where it becomes annoying. It’s a satisfying political satire that also happens to be a sci-fi/horror film. Works for me.

The main reason to watch C.H.U.D. today is to spot all the familiar faces before they were recognizable. In addition to Heard and Stern (who were already fairly established at the time), you can see BRAZIL’s Kim Griest, John Goodman, Jay Thomas, HOME IMPROVEMENT’s Patricia Richardson, TV veterans Sam McMurray and Eddie Jones and others before they became part of the pop-culture lexicon. It’s like 90 minutes of screen trivia right in front of your eyes. And they all do a good job in the acting department as well, which is a plus.

C.H.U.D.’s legacy continues to this day: Episodes of TH 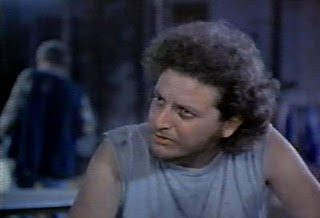 E SIMPSONS and ROBOT CHICKEN have used C.H.U.D. as a punchline, bringing the nostalgia with the funny. There’s a website called CHUD that covers horror-related things. And, of course, there was the in-name-only 1989 sequel C.H.U.D. 2: BUD THE CHUD, which is truly horrible and should be avoided at all costs.

The Anchor Bay DVD contains the uncut version of C.H.U.D., restoring scenes that were missing in the theatrical and television versions. Notably, a scene involving the Greist character’s pregnancy has been reinserted—even though this subplot never goes any further, making one wonder why it wasn’t included separately as a deleted scene instead. Still, the ending is put back in its proper order (having been rearranged by New World for the big-screen release), leaving the film more self-contained instead of open for a possible sequel. At a low price, the disc is worth buying if you’re a fan, or curious about C.H.U.D.’s cult status.

THINGS I'VE LEARNED WHILE WONDERING WHEN THE C.H.U.D. MEETS THE TEENAGE MUTANT NINJA TURTLES MOVIE WILL BE RELEASED

- Some lady and her dog got sucked into a manhole. I thought this sort of thing only happened in prison. Or in Ricky Martin's house.

- Lauren puts makeup on her butt to cover the pimple on her ass. I guess George has to pop more than just her cherry in bed.

- Captain Bosch believes his wife is missing in the sewers. Unless her name is April O'Neill, then I believe something worse may have happened.

- George and Lauren are going to be parents. I feel bad for that kid. He'll probably be left HOME ALONE...twice!

- Don't go into a phone booth that's near a manhole and make a phone call. You'll be killed by a C.H.U.D. That's what you get for calling collect, you cheap bastard!

- Some guy just randomly ate a dime. That didn't make much cents at all.

- The Reverend got trapped in the sewers by someone who wants him dead. Compared to paint cans, spiders, and hot doorknobs, being trapped is a walk in the park!

- Captain Bosch found his wife's head by a river bank. If she was auditioning for the role of Anne Boelyn, she's got the part!

- After Lauren unclogged the tub with a hanger, blood squirted out of the drain. I guess the tub has finally blossomed into womanhood.

- Two cops were murdered by C.H.U.D.s. Everyone loves bacon! 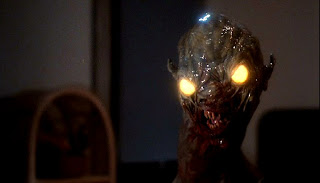 While not a monumental horror/sci-fi hybrid, C.H.U.D. is still a piece of ’80s horror nostalgia that deserves its following. The script is straightforward, the acting and direction are solid, and looking out for those actors before they hit it bigger is a fun activity. Dealing with a C.H.U.D. in the sewers may be rough, but watching their exploits is definitely worth the trouble.