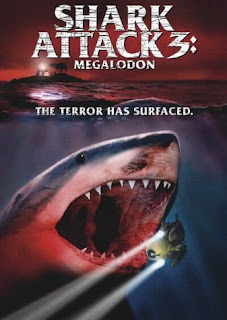 DIRECTED BY
David Worth


PLOT
Some company called Apex is busy installing some cable that runs down the floor of the Pacific Ocean. Things go smoothly until something in the water attacks and murders several members of the crew. Since no one really gave a damn about this Apex company, no one realizes what happened for a long while.

Some time after the previous events, the story leads into Mexico. Ben Carpenter (John Barrowman), who is charge of keeping the beaches safe, goes diving and finds a giant shark tooth. Not knowing what kind of shark this tooth would belong to, Ben does some internet research. Reaching a dead end, Ben e-mails a San Diego paleontologist named Cat Stone (Jenny McShane). Cat reads Ben's message and downloads a photo of the tooth. Realizing that the tooth belongs to a megalodon, a supposedly extinct ancestor to the Great White Shark, Cat rushes to Mexico to do more investigating. Ben and Cat realize that the shark is only a 15-foot long baby, believing that it could be dealt with. As Ben, Cat, and some friends try to contain this shark problem, they don't realize that the shark's very large mother is also out on the prowl as well. Not only that, but the Apex company is going to make sure that Ben and friends don't interfere with their plans to unveil some dangerous technology.


REVIEW
As you know, I either do a detailed long review [with a "Things I've Learned..." section] or a shorter HITS and MISSES review that gets the major points across. Mixing both types of reviews have kept me from being burnt out and maintained a good number of reviews appearing on the blog each month since I started. However, some films can't be reviewed under these conditions, especially when it comes to B-Movies.

Back when I was doing my long video reviews, I reviewed B-Movies under a certain criteria to give those films an honest score. So because of the uniqueness that is SHARK ATTACK 3: MEGALODON, I'm bringing this criteria back for B-Movie reviews from now on. I will grade these type of films by their Story [Screenplay, Direction, and Acting], Violence, Sex, and Cheese within a score of 10 each, and divide them by 4 as I round the average to one of my usual scores. B-Movies deserve to be judged and viewed differently than other films, so I will follow that thought.

Now that we got that out of the way, let's review SHARK ATTACK 3: MEGALODON: - Screenplay: Let me just get this out of the way - the script to SHARK ATTACK 3: MEGALODON is absolutely terrible. There's really no plot to this film. A prehistoric shark is released and people have to stop it from eating people. Nothing more, nothing less. Just a barebones narrative that doesn't bother to surprise you or show you anything you haven't seen countless times before. The story is paper-thin.

The characters are one-dimensional as hell, all really bad stereotypes. Ben Carpenter is a hero inspired by any character Tom Cruise had played in the 1980s, yet we don't really know much about him except that he can win over ladies with terrible dialogue, pilot submarines that seem to switch sizes depending on where its shot, take photos of things from reality that show up with a white background on his computer, and smile his shit-eating grin. There's nothing about this guy you can relate to.

The other characters are no better. Cataline Stone is a paleontologist, whose only job description is having dinosaur books on her desk. Oh, and she's pretty much easy as hell when it comes to bad pick-up lines. Other than that, nothing else catches your interest. We also have the evil businessman being, well, evil. He's the typical villain who wants to cover up his mess. And then there's the sidekick/mentor who has the one-liners and brings some comic relief. He also has photos of George W. Bush and Dick Chaney in his office. Other than that, he [and none of these characters] have any depth at all. You could have replaced them with any other type of character and nothing would have changed.

The only saving grace of this horrible screenplay is a certain line.

This line is honestly terrible, but dammit...it's brilliant at the same time! And it actually works for this dude! How come I get kicked in the balls while this guy gets his balls drained over the same pick-up line? What's even better is that John Barrowman actually ad-libbed this line to get a rise out of Jenny McShane, who actually no sells it. He had no idea this would be in the final cut of the film, but because of it, his performance in SHARK ATTACK 3: MEGALODON is now an internet and pop culture sensation. Bravo, Mr. Barrowman. This line is the saving grace of an awful script.

- Direction: David Worth returns from SHARK ATTACK 2 to provide for us a visual feast for us to chew on. And by 'feast', I mean boring visual style, lack of tension, suspense, scares, or anything a film called SHARK ATTACK 3: MEGALODON would need to be a good film. The editing is terrible at times, especially when we see the same shark being portrayed by both a Great White and a Tiger Shark. Also, I love how a small submarine actually looks huge inside. There are a ton of inconsistencies visually, which makes SHARK ATTACK 3: MEGALODON unintentionally funny to watch.

If Worth has done anything positive as a director, it's keeping Barrowman's infamous line and for the final act of the film, where the Megalodon swallows people. It's entertaining to watch for all the wrong reasons, which makes this film so bad, that it's good.

By the way, I thought the POV from the shark's perspective was pretty funny also.

- Acting: All the actors here are terrible as well. At least John Barrowman seems to be having a good time, or at least pretending to be, as he constantly smiles his way through the film as some sort of defense mechanism. He does his best Tom Cruise impersonation and does his best with what he's given. Plus, he had that awesome ad-lib so he's the best actor by default. As for the others, they're just laughable to watch. Jenny McShane isn't great here and never comes across as convincing. In fact, there's a moment where she's so supposed to act upset and scared, yet it looks like she's trying hard not to laugh. While it's funny, it's kind of sad too. At least try to make the material work. No one else really stands out, especially since most of the actors are dubbed with Mexican accents [the film was filmed in Bulgaria with Bulgarian actors] - all sounding horrible and just making you laugh rather than making you engaged with the material. So the actors' deliveries are bad, but at least it's somewhat fun to watch. 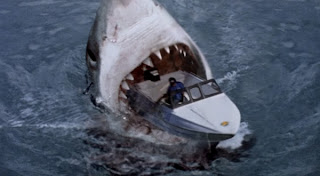 SHARK ATTACK 3: MEGALODON has the usual shark-on-human violence. We see a mutilated body from time to time. A few detached limbs as well. Sharks get shot. Sharks attack ships. Someone gets electrocuted. And then in the final act, a bunch of people on a yacht are swallowed by the giant Megalodon.

WHO IS MADE FROM STOCK FOOTAGE.

People getting killed by something that's from stock footage - how can something so terrible be so freakin' awesome?? Screw gore and disturbing murder sequences. It'll never beat stock footage murdering idiotic characters on jet-skis and life rafts. My mind has been completely boggled. 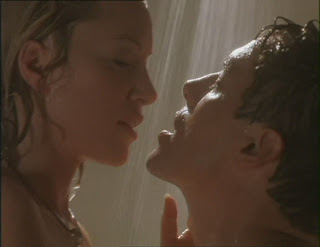 What can I say about how cheesy SHARK ATTACK 3: MEGALODON really is? A pick-up line that shouldn't work does. People getting swallowed by stock footage of a shark. Actors who act exactly as if they know they're in a crappy flick. There's so much cheese in this film, you'll be in the bathroom for a week if you're lactose-intolerant. I love it. 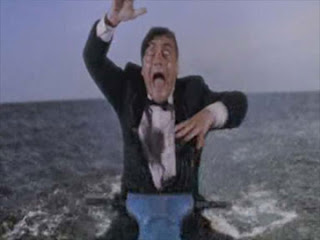 SHARK ATTACK 3: MEGALODON is, by far, a terribly made film. The direction isn't great. The acting is laughable. The story is barely there. And the special effects, or use of stock footage, are just not up to par. That being said, SHARK ATTACK 3: MEGALODON is one of those really bad films that continue to have a high level of entertainment value for those nights you want to hang out with your friends and just laugh at how ridiculous this whole deal is. It's not TROLL 2 quality, but it's pretty close and deserves to be watched by all bad movie lovers. And for that line alone, I'm bumping the score a bit. Just a mess of a film that deserves to be appreciated by those who 'get' it. 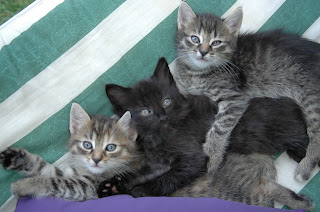