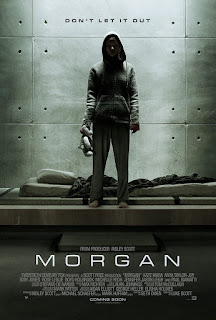 PLOT (from IMDB)
Lee Weathers (Kate Mara) is a “risk-management specialist” for genetic-engineering company SynSect. She arrives at the rural site hosting its L-9 project, an artificial being with nanotechnology-infused synthetic DNA named Morgan (Anya Taylor-Joy). The “hybrid biological organism with the capacity for autonomous decision making and sophisticated emotional responses” is smarter than humans and matures quickly, walking and talking within a month and physically a teenager despite being five years old. Due to her latest violent impulses, Weathers must decide whether to terminate Morgan, but Morgan may have a deadly opinion on the matter.

As it’s funny now that I’m motivated to review things again here on this blog, my slow return has been me discussing films that are pretty sub-par or average that honestly should have been a lot better than what was executed. Another film that falls under this category is 2016’s MORGAN, a film that pretty much came and went during its theatrical run, not making much of an impression on anyone despite its mega-talented cast and a son of a very famous director behind the lens. What begins as an interesting sci-fi drama and character study dissolves into a predictably bland horror film that’s pretty forgettable once its all said and done. It wants to be two films at once, but never managing to execute one the way it should have.

MORGAN is just another in a line of films that tackles the idea of Artificial Intelligence and the concept of “how much God should man play” when it comes to science. The first half of the film is concerned with the L-9 Project, or Morgan, who grew up as a synthetic being through the splicing of DNA to study her human behavioral patterns. Technically only five years old, she has a great level of intelligence but isn’t exactly sure how to react to what she learns emotionally. At first, she behaved like a regular child - enjoying playing outside and laughing with the scientists who she saw as her friends and family. But as she learned more and grew up, her lack of conscience or soul has made her do terrible things - to the point where she has to be locked in a glass cell. When she’s threatened that she will never go back outside, she injures her friends because she doesn’t know how else to react. We’ve seen this kind of story told in other AI films, such as BLADE RUNNER or even EX MACHINA, where machines can look and act like human beings, but don’t have the moral compass to tell what’s right and what’s wrong. While MORGAN doesn’t add anything new to the genre that other films have done way better in doing, at least the film tries to have some sort of message about the evils of playing God with things we can never have the grasp on. You can create looks, personality, intelligence, or even sexuality when it comes to artificial intelligence. But even the greatest of science can never achieve a moral compass or conscience that a computer or science project would be able to comprehend. Morgan is just a physical representation of human nature and the Freud “id vs ego vs superego” theory that we’re taught in psychology books. And because of this, the first half works somewhat to its benefit.

However, the story quickly becomes this horror film where the science project starts killing those she feels have entrapped her because freedom is one of the key things we all want as living creatures. It feels cheap and predictable, never really giving us a reason to care about what’s going on after a decent build of learning about Morgan’s plight. It doesn’t help that the characters around Morgan aren’t all that likable or sympathetic in any way. A couple seem like good people and care about Morgan, but are never given enough time or scenes to really make their relationship with Morgan mean much. The only one who gets any sort of major screen time with Morgan is Amy, a scientist who would spend time with Amy on the outside and sneak her out without the others knowing. Morgan only shows genuine affection towards Amy because she’s been nice to her, and Amy is completely protective over Morgan to a point where it seems like she’s in love with her. It’s an interesting angle I wish was explored more, as it feels as the only one that has any depth. The other characters are either nice to Morgan because they care, or because they have ulterior motives. Some just turn their back on her once she starts behaving out of sorts. Most of these characters don’t feel like real people, just two-dimensional lambs for an eventual slaughter.

The worst care of this is the other main character besides Morgan - Lee Weathers. Lee is called into the situation to analyze the risks with Morgan, wondering whether the project has any chance of being saved, or should be terminated for the benefit of mankind. While we have an excuse as to why Morgan acts a bit cold besides when it comes to Amy, Lee pretty much has no personality whatsoever. She’s almost robotic in her presence, not allowing us to feel anything about her. Sure, she has a flirtatious relationship with Boyd, the group’s nutritionist, but even that feels sort of one-sided and a bit flat. There’s a twist that reveals some things which make it obvious as to why people behave the way they do, but at least make your main characters likable. I wasn’t sure whether to root for the flawed science project with homicidal tendencies or the cold hearted woman who was there whether to determine whether Morgan lived or died, regardless of how the people around her felt about her decision. That’s not good. 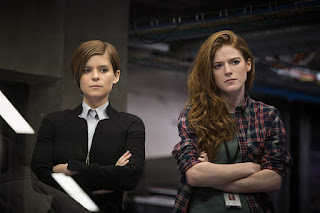 MORGAN is Luke Scott’s [son of famed director Ridley Scott] first feature film. And honestly, I’m not sure what kind of director he wants to be. It’s obvious he has taken things he has learned from his father. Scott definitely has an eye for filmmaking, as the composition of the film looks great and the set designs look modern enough to keep audiences interested. And the action is somewhat shot like what his father would have done if he had directed this film. But there’s no real individual voice yet, as MORGAN looks like any other film you may have seen of this type within the last five to ten years. That being said, the drama-filled first half flows nicely enough and the messy second half is kind of held together by interesting action shots. Unfortunately the film lacks tension, suspense, or excitement for any one to care about what they’re watching. It’s too early to say if Luke Scott should stick with being a second unit director, or continue directing more films. But he definitely has potential as long as the script is a lot better.

MORGAN has a lot of great actors involved, but most of them are pretty wasted here. Anya Taylor-Joy does what she can with the title role, but really isn’t given much to do besides the final act. Taylor-Joy is a very good actress that should have been allowed to portray a beefier role with more depth. But she tried. Kate Mara gets to do more as Lee Weathers, especially during the final act. She plays a cold, stoic woman well, but it doesn’t give her character any depth or likability. At least she got stuff to do. Everyone else do what they can with their roles, with Rose Leslie and Boyd Halbrook being the standouts really. It’s a shame because this is a very solid cast capable of elevating a mediocre film. But because of the bland script or Luke Scott’s inexperience behind the lens, the cast is just sort of there playing archetypical roles. Too bad. 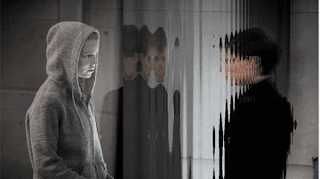 Despite a solid cast and directed by the son of a famous director, MORGAN is a misfire on so many levels. The screenplay doesn’t seem to know what it wants to be in terms of a horror film or a sci-fi drama. The visuals are pretty bland and never provide any sense of tension or excitement. The actors are all good in their roles, but they don’t really get a whole lot to do. The worst part about MORGAN is that it should be a silly fun flick, but never ever tries to be one. It’s an empty film that has nothing to say, even though all the elements that make up the film give it the means to. Watch SPLICE or EX MACHINA if you want a good film about artificial beings. This experiment is not worth exploring.