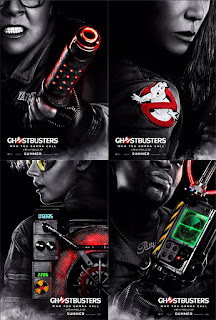 PLOT
Paranormal researcher Abby Yates (Melissa McCarthy) and physicist Erin Gilbert (Kristen Wiig) are trying to prove that ghosts exist in modern society. When strange apparitions appear in Manhattan, Gilbert and Yates turn to engineer Jillian Holtzmann (Kate McKinnon) for help. Also joining the team is Patty Tolan (Leslie Jones), a lifelong New Yorker who knows the city inside and out. Armed with proton packs and plenty of attitude, the four women prepare for an epic battle as more than 1,000 mischievous ghouls descend on Times Square. 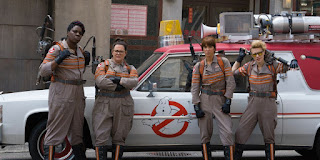 Probably the most hated film of 2016 even before it was released, this reboot of 1984’s classic GHOSTBUSTERS had a lot going against it.

The original cast not returning to their roles, even though Harold Ramis passed away in 2014? Blasphemy!

You’re telling me that women, one being Melissa McCarthy, are going to be the stars of this reboot? Boycott this movie!

Are you serious that Paul Feig, director of BRIDESMAIDS and THE HEAT, is going to make this film? Terrible!

Oh my God - those trailers make this look like the unfunniest movie ever! And that new Fall Out Boy & Missy Elliott theme song? God, what garbage! (Seriously, that song sucks.)

Many people on the internet had already judged the film before it was even released, giving it low ratings on multiple sites, and writing posts against watching it if you’re a true GHOSTBUSTERS fan. Once the film was closer to be released, you were either misogynistic if you were against watching it or paid by the studio if you praised its existence. Even my normal group of movie-going friends refused to see it because of the negative hype. But as someone who wants to be honest about films, I was curious enough about this reboot to check it out on my own. I knew it wouldn’t “rape my childhood” because the original films and The Real Ghostbusters animated series would still exist, and I knew there would be a possibility the reboot would surprise me and other people by actually being watchable.

And you know what? GHOSTBUSTERS 2016 won’t destroy your childhood memories. It doesn’t deserve the hate it has received the moment it was announced. This reboot actually exceeded my expectations somewhat, even if it is flawed in its screenplay and direction somewhat. It’s not anywhere as great as the original, but it’s probably on par as the second film - maybe even better than that film actually.

Let’s get the problems out of the way. The script for GHOSTBUSTERS isn’t a masterpiece. It’s more focused on punchlines than on actual storytelling, which is great for a Saturday Night Live skit but not for a reboot of a film many consider a pop culture institution. This is evident during the film’s second act, where the story begins to not exist for the sake of funny scenes that don’t always work rather than developing the villain or doing anything that would push the story forward. Luckily, the actors help make the most of the script, turning some negatives into positive. But it doesn’t really push the envelope, instead doing what worked in the original but in a more generic fashion. 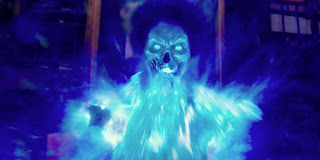 Speaking of the villain, he really did nothing for me. Being bullied, leading to wanting to destroy the world with ghosts, is a bit cliche and nothing original is really added to make it stand out more. I know this franchise hasn’t had the most developed villains - seriously, Gozer and Vigo weren’t the most dynamic of folks - but there was time to really flesh out this person. Instead, it was used for jokes. Comedy has its place, but I would have preferred a stronger antagonist. It doesn’t really bug you all that much as you watch it, but it nags at you once the film ends.

I also felt the cameos were wasted opportunities. Yes, the main players of the GHOSTBUSTERS franchise return to make appearances [besides the retired Rick Moranis and the late Harold Ramis - although there is a shout-out towards the former Egon during the first act], and some work better than others. Annie Potts and Sigourney Weaver were the best for me, as Potts brought a bit of Janine in her appearance and Weaver crafted a memorable cameo. But Bill Murray’s cameo felt bland, and Dan Akkroyd and Ernie Hudson were great to see but didn’t add all that much. Honestly, their appearances just make me realize how much better the original one and wishing the original cast had done another one [not in video game form] while the opportunity had still presented itself.

And that damn theme song is in the film, which made everyone in my theater [including myself] groan. I’m just happy it only played once, with versions of the original theme playing more instead. And I actually like Fall Out Boy! Just awful.

As for the good? The cast is the best thing about this reboot. The four ladies in the lead are really wonderful and have tremendous chemistry with each other. Kristen Wiig and Melissa McCarthy play the “straight-women” of the group, portraying their characters a bit more seriously than the others. Wiig’s prude behavior creates several laughs, while McCarthy surprised me with how much she reined it in. I’m not a hater like some people are of McCarthy, but it was great to see her not overdo the comedy. She can be a bit much at times, but she worked perfectly fine here. Leslie Jones was great as the sassy member of the group, thankfully not going overboard with stereotypes and actually creating a character that’s actually funny and likable. Kate McKinnon, however - wow, she’s the best part of Saturday Night Live these days and she’s the best part of this film. Her role as Holtzman is one of the more memorable characters in the franchise’s history. Funny and off-the-wall, McKinnon stands out amongst her peers. I wish she had been used in the film more to her fullest potential, but she does get the best character moment near the end during one of the better action sequences in the film. I think I have a crush. And Chris Hemsworth was pretty hysterical as blonde himbo, Kevin. I can see why some were bothered by his acting, as he’s really hammy with the comedy. But his enthusiasm and overall joy of playing against type was pretty infectious. His job interview scene was one of the film’s highlights. 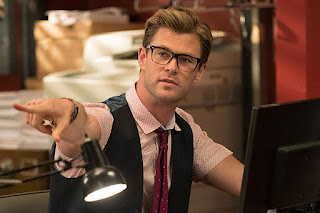 I also thought the CGI was used well. Look, GHOSTBUSTERS had cool effects for its time. But they just look really dated today, and the only way we’re going to get cool looking ghosts today is through computer generated effects. And honestly, I thought the ghosts looked great and all seemed to have different looks and personalities. Plus, we get to see some old favorites in the final act, which I appreciated. That female Slimer was a bit much, but everything else was great.

And I don’t think it was the most dynamic filmmaking ever, but Paul Feig did his best with directing this reboot. He still needs to work on his action sequences a bit, but the film looked great and was presented a lot better than I thought it’d be. Pacing was off a bit at times, and some of the editing could have been better. But the comedy stuff mostly worked. And the final battle, while goofy and cliche at times, still managed to be fun. Again, Feig would not have been my first choice to bring back the Ghostbusters. But he did a commendable job for his biggest budgeted flick. 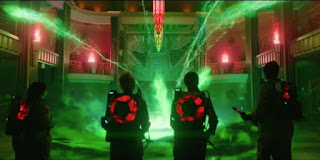 Like many people, I wasn’t excited for this GHOSTBUSTERS reboot. But I went in with an open mind and ended up enjoying it more than I had anticipated. The female cast is great, in particular both Leslie Jones and especially Kate McKinnon [she needs to be a movie star like now]. The CGI ghosts looked cool and stood out. The laughs were mostly there and the first & third acts worked for me. Yes, the film has script and pacing issues that are unfortunate. But overall, I laughed and I liked the nostalgic feeling I got from seeing Ghostbusters again. A fun movie and nothing more.