The Watchtower of Justice Looks At: Superman III (1983) 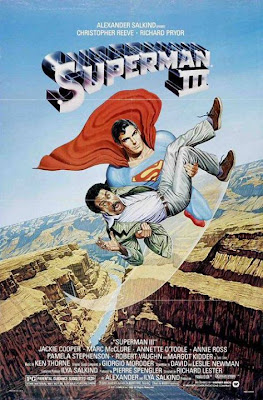 After the success of Superman II, despite Warner Bros. screwing over Richard Donner in favor of giving the director's chair to Richard Lester, WB was ready to move right into Superman III. Being that the Salkinds and Warner Bros. liked the more light hearted direction that Richard Lester had brought to Superman II, they decided to bring him back to direct Superman III. But that wasn't all, as it turned out comedian Richard Pryor was a big Superman fan and wanted to star in the third installment. With a big name like Pryor, WB figured that Superman III would gain more success from not only those who loved the first two films, but from Pryor's fanbase as well. So in summer 1983, Superman III was released to theaters and met with pretty mixed reactions. Some enjoyed it in a comedic way. And others (the hardcore Superman fans) hated it. But, it still did decent business at the box office to make a fourth film a few years later. This my friends is where a franchise that started off good just went to Wackyville where stupidity and lunacy lurk around almost every corner!

Crooked businessman Ross Webster hires computer programming goofball Gus Gorman to help him mess up the weather and spill oil. Meanwhile, Clark Kent is doing a story about his High School reunion in Smallville. There, he runs into his old friend and crush Lana Lang. The two start hanging out along with Lana's son Ricky. Things get crazy when Lana's alcoholic old football player boyfriend Brad gets jealous of Clark. Superman stops some of Webster's insane schemes. Webster gets Gus to find some Kryptonite to kill Superman. Gus accidentally gets synthetic Kryptonite. Instead of killing Superman, this Kryptonite brings out his evil side. Superman goes batshit crazy. First ignoring peoples' cries for help then straightening a slanted landmark and who can forget getting drunk and beating himself up? Superman is able to defeat the evil side of himself and stops Webster in a cave with a bunch of laser zapping, robots, and all kinda of stupid shit.

All I can think of after witnessing Superman III is: WHAT THE HELL? This movie hardly makes sense! The one positive I can say is I dug the Smallville stuff when Clark reunites with Lana Lang. I was entertained watching those two rekindle for the first time since graduation. Good stuff. BUT, everything else was a colossal mess of a Superman movie. The villain was uninteresting. Richard Pryor who I do find funny was too damn wacky and looney in this film as Gus Gorman. I did not care about this character and he kept taking me out of the movie. As for the villain Ross Webster, eww. The thing I hate besides this movie is that they didn't pick a villain from Superman's rogue's gallery like they did with Superman The Movie and Superman II. Never thought I would actually miss Gene Hackman as Lex Luthor. At least he was from the rogues gallery and was interesting. Give me Brainiac! Give me Metallo! Give me Toyman! Honestly the way they were headed with this film, Bizarro would have been the perfect villain. Superman vs Superman! And they could have had Lex create Bizarro to kill Superman. THAT would have been a good Superman III! Not this awful and uninteresting businessman for the film's villain. Ugh.

As for the Superman vs Clark Kent stuff, I thought it was amusing. But, here's the thing. They basically made this synthetic Kryptonite a combo of Red and Black Kryptonite. Red makes Superman turn bad. Black splits the Human and Kryptonian sides of him into two seprate people. I laughed my ass off at the scene where Superman is at the bar getting good and drunk. It was almost like he knew he was starring in a shitty movie.

Lois Lane is barely in the film. It's explained that she's going on vacation. I guess they figured that Lana Lang would be Lois Lane's replacement for the duration of this movie. I did enjoy towards the end when Lana gets a job at The Daily Planet as Perry White's assistant and where her and Lois meet.

The ending to this film is one of the biggest massacres of a finale I have ever seen. Ross' sister gets electrocuted and becomes some super powered terminator! Superman gets trapped in a bubble! What the Hell is this? A live action version of Superfriends? At least that show worked in its ridiculousness and made sense. This just left me looking at my clock and praying the two hours were almost over.

And what was up with the opening? I LOVE the opening credits sequence of Superman The Movie and Superman II, but this? No. Seeing random Metropolis citizens acting clumsy and goofy music playing is NOT my idea of awesome. Sorry. Seriously, everybody in this city trips over themselves, gets paint dropped on their head, gets trapped in a car full of water THAT'S ON THE STREET, and all the while we get some Halloween 5 goofy cop music cues!

The acting is mostly very bad, but there is some light amongst the darkness. Christopher Reeve does the best he can with what he's given. Honestly he is one of the highlights of the film, even when he's getting drunk and kicking his own ass Jim Carrey style. Annette O'Toole was actually really good as a grown up Lana Lang. Bit of trivia: Annette O'Toole also played Superman's adopted mother Martha Kent on Smallville. Superman regulars Jackie Cooper and Marc McClure were good in their minor roles as Perry White and Jimmy Olsen. Margot Kidder was good in her very brief role as Lois Lane. Richard Pryor was downright annoying as Gus Gorman. I just found him distracting. Robert Vaughn was very meh as the villainous Ross Webster. I don't really care to mention any of the other names in this mess.

The direction by Richard Lester was horrendous! I hate it that Warner Bros. went with this guy over Dick Donner. Donner probably would have made a good Superman III that would have been fun. Unfortunately he was screwed over and Lester got the gig.

Overall, Superman III is a terrible Superman movie and is a mess of a movie period. I would avoid this one unless you are very curious how bad it is. Bring alcohol because like Superman, you are gonna want to kick your own ass for actually watching this movie. Too bad that Superman IV: The Quest For Peace is also terrible, but at least I get laughs out of that one and it brought back Gene Hackman.