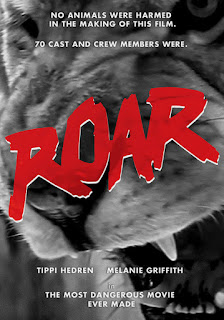 For the last few years, there has been one film I’ve been wanting to review during Animal Summer. That film is 1981’s ROAR - a film so notorious that I didn’t believe the hype until I finally sat down and watched it a few days ago.  ROAR is a film that’s not easy to review since it’s really just a movie where a bunch of animals [mainly big cats like lions] scare the actors and attack them as naturally as they can since they’re not trained professionals. This film isn’t a film you watch for it’s technical and storytelling aspects. This is an experience that must be seen, with a behind-the-scenes story that’s more interesting than what was put on screen. How the hell ROAR was even made and given the chance to see the light of day is a question many who have watched it still ask to this day.

PLOT (from IMDB)
A naturalist (Noel Marshall) living with big cats in East Africa expects a visit by his family of four from Chicago. A mix-up leaves him searching for his family, who have been left in the clutches of wild lions. 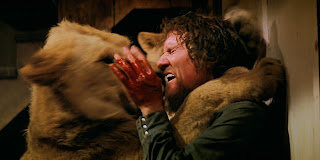 Before 2020’s phenomenon over the lunacy that was Netflix’s Tiger King, we had 1981’s ROAR. Like I mentioned previously, trying to review this as an actual movie isn’t really possible, or the point for that matter. While there is a story, it’s so basic that it’s not worth even mentioning. I mean, the film even forgets about it for 85 percent of the time. The direction is just someone filming people getting scared and mauled by lions, to the point where you start to wonder if Noel Marshall was developing his own snuff film here. And the “acting”… I mean, how else is one going to act when a hungry lion is swiping their big paws at them at all sides? These people were scared and nervous to death and it’s plain to see on film.

What makes ROAR still so appealing is the gall everyone involved had in thinking this was a good idea in execution. For those unaware, filmmaker Noel Marshall and actress Tippi Hedren [famously of THE BIRDS] were married and actually lived with a bunch of wild cats after they were inspired by a game warden [who also lived with big game cats] on a safari. Along with their children, Marshall and Hedren would collect felines they felt were being mistreated at zoos, as well as breeding new cats in order to live this game warden’s life for whatever reason. Thinking it would be cool to document this life, Marshall and Hedren created ROAR - a film that pretty much took eleven years to complete due to funding issues [gee, I wonder why?]. While the idea of a loose documentary/thriller about living with lions, tigers and panthers isn’t a bad one, it didn’t help that nobody in the family had any idea how to train or even raise these wild animals without fearing that someone would get hurt, or even possibly get killed, while cohabiting with these beasts. It was just normal life for the family, as they slept with lions and played with them as if they were house pets.

Even though the film was obvious staged to create this family adventure film with wild cats, behind the actors’ fears is a lot of affection for these animals. After all, these pets were a major part of their lives and they just wanted to capture genuine scenes of emotion and thrills to entertain mainstream audiences. Even the animals, themselves, seem to understand they’re in a film and act accordingly, even showing to be playful and affectionate towards the humans. But wild animals are just that - wild, unpredictable, and most importantly dangerous. Without personnel who could control these cats, you knew bad things would happen. 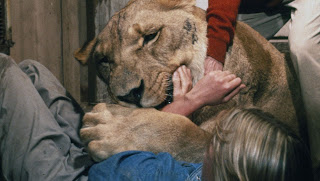 While no one shockingly died behind-the-scenes, the amount of injuries between the crew and even the cast themselves, is probably unheard of for any other film in history. Seventy people suffered filming ROAR - and you can see some of the brutality onscreen. Melanie Griffith, in one of the most nail-biting moments in the film, actually gets mauled by a lion as it clawed her face. The damage was so bad, she had to get facial reconstructive surgery. If I hadn’t known that, I would have never guessed since she still looked pretty much fine after ROAR, having a very successful career as an actress and a model. The richer you are, the better the doctors apparently.

Future SPEED and TWISTER director, Jan De Bont, took a job as cinematographer of ROAR. He’s the reason why the film looks pretty damn good. Unfortunately during production, De Bont had a terrifying encounter with the animals, leaving him scalped to the point where he required over 200 stitches to reattach his scalp back to his skull. And the dude still returned to the set and finished the movie! Give this man all the awards… and some therapy to help with his obvious insanity and trauma!

Lead actors and then-married couple, Noel Marshall and Tippi Hedren, had such bad experiences on the set that parts of their body were attacked by the animals. This led to infections that gangrened, requiring immediate hospitalization. Marshall’s infection came from an early scene where lions bit his hand all the way through, infecting his entire arm. He also got dragged down the stairs by the leg at one point - also eventually getting infected. Hedren’s infection was courtesy of a broken ankle when a pissed off elephant grabbed her foot with its trunk. You can actually see the moment where the elephant breaks the ankle on the film, which is wild.

Other crew members suffered similar fates due to the uncontrollable environment, including some bitten with almost fatal puncture wounds. One person even lost their ear because of filming. The main issue is that ROAR was a non-unionized project, meaning there were no mandatory protocols for safety or animal handling on the set. The crew kept changing because they were able to quit without hurting their careers. And without a script to follow due to the untrained animals, no one really got a sense on where things began and where things ended. And you can tell by watching the final product.

The lack of an union also, unfortunately, led to some of the animals getting hurt or even killed during filming. The film claims that no animals were harmed, but it’s been pretty much documented that at least three of the lions, including one of the credited ones [Robbie], was shot by the local sheriff’s department since they were considered dangerous. I also believe that there was also a flood during filming, which caused some of the lions to flee into the wild to who knows where. It’s really tragic, considering that this film shouldn’t have been made period and these lions should have been handled better. You’d think the Humane Society or some animal organization would have put a stop to this back in 1981, but i guess not.

And of course, the main casualty for the actors/family involved was the divorce between Marshall and Hedren because of ROAR. Hedren, realizing that her daughter was almost killed by lions, realized that she couldn’t put her in any more danger and wanted out of the marriage. Considering Marshall did everything in his power to finance ROAR through money from being part of the crew for THE EXORCIST, making deals with foreign investors who backed out when they realized what the money were being used for, and outside jobs, being married to a man who had no issue putting his wife, two sons, and step-daughter in real danger was probably not the best idea. And since ROAR bombed at the box office and wasn’t officially released to home video until a few years ago, it probably wasn’t really worth the drama. What a mess.

I guess the good news coming out of all this is that people can finally see what the hype was all about and experience ROAR for themselves. And Hedren, realizing the trouble she had been a part of making ROAR, decided to dedicate the rest of her life creating a preserve where the surviving animals [as well as new ones] could be protected and loved in a safe environment. I believe she still owns the animal preserve and makes sure nothing like ROAR ever happens again. Hedren also didn’t murder her husband, which is something I can’t surely say about other people who preserve big, wild cats. But that’s another story for another time. What can be said about ROAR? It’s not much of a film in terms of a narrative or anything technically special. The film has no real story, no real style, and the acting isn’t even acting - unless you consider actors trying to survive wild lions “acting”. But the film is an experience and a half, especially when you research the behind-the-scenes fiasco for multiple years that led to ROAR’s existence. As someone who has anxiety issues, watching real animals swipe, slash and bite scared and nervous actors didn’t help, as the film is filled with constant tension knowing actual danger is playing on my screen. And that’s the real reason to watch ROAR - it’s a car crash you can’t look away from. For those who enjoyed this year’s Tiger King on Netflix, ROAR will definitely be up your alley. And watch any documentary or behind-the-scenes videos because they’ll only add to the viewing experience. ROAR is a mess, but a captivating one that fans of the genre should watch at least once.