Go here to read this review, as well as many others that will put you in the ShitMas Spirit! 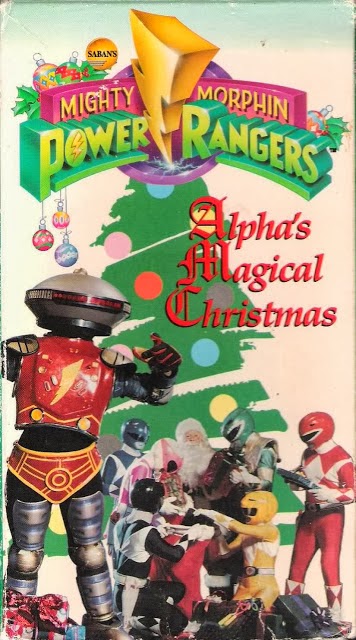 I want to thank Thomas for inviting me to this year's ShitMas celebration. 2013 has already grated me with all this supposed holiday cheer. Annoying Christmas music. Christmas movies where everyone is smiling and laughing. Festive decorations all over the damn place. All this before Thanksgiving! Ugh! So I figured I'd continue to torture by reviewing something related to the 90's phenomenon known as the Power Rangers.


Now don't get me wrong. I friggin' LOVE the Power Rangers. My cousins introduced me to the show during the "Green With Evil" five-part miniseries that introduced Tommy, The Green Ranger, around the start of the first season. I stuck with the show for years, regardless of how cheesy and stupid [the appeal of the show to begin with] the episodes were. Plus, Amy Jo Johnson was super crush-worthy as Kimberly the Pink Ranger. 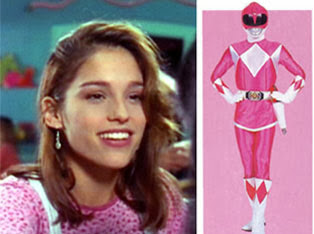 So seeing that everyone else was doing the tradition Christmas films and television specials, I decided to take it like a man and review one of the few Christmas episodes of the Power Rangers. However, there are like five of them and I didn't want to be in a suicide ward for 72 hours. So I decided to do just one. And honestly, it was a Christmas special I had never seen before. Why? Because it was exclusively made for VHS, never been shown on television [and for good reason]. It was released during the controversial second season of the Mighty Morphin' Power Rangers era, as three of the original actors were let go from the show due to contract disputes and replaced by three new Rangers. Maybe that explains why this Christmas special is so damn terrible, I wanted the holiday to be cancelled for all eternity!
So without further ado, let's discuss the elusive Power Rangers Holiday Special - ALPHA'S MAGICAL CHRISTMAS. 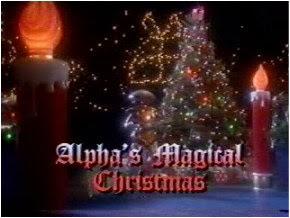 Yes, the one character that will grab the massive fanbase is the sidekick robot who is one of the more annoying aspects of the show's history. But whatever. He's like C-3P0 mixed with Jar Jar Binks, being led to order by a giant floating head in a tube named Zordon. Yeah, I can smell the monies!
Anyway, let's get to the special itself. 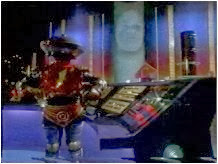 So apparently in the Command Center, Alpha has a huge problem. He's a robot who also happens to be Catholic for whatever reason, and feels lonely during the holidays. He wishes his best friends [or the only people who don't want to turn him into scrap metal], the Power Rangers, were around to spend some holiday cheer with him. Zordon, being the kind wizard that he is, dryly tells Alpha that the Power Rangers are too busy for his metal ass because they're helping Santa Claus during his delivery of gifts.
Yes, apparently Santa Claus has trouble doing the ONE JOB has he all year and needs help from six adults passing for teenagers. Yeah, Saint Nick is the epitome of hard work and determination. By the way, we get a glimpse of Santa's "hard work" through the viewing globe [the Command Center's television] as he pets and feeds a reindeer. Wonderful.
Alpha, being a selfish prick, doesn't care about that and just wants to hang with the Rangers. Nevermind Zordon, who's always there for the robot. He's nobody! Only the Power Rangers matter!
That scrap metal deal is looking really good right now.
Alpha, having magical powers that he's never used at any point in the series, decides to use them to create Christmas decorations inside the Command Center. I've always wanted the power to bedazzle out of thin air. Zordon forgives Alpha for treating him like he's invisible, telling the robot to press the red button on the console [one of many that Alpha presses to create various results]. This creates a Christmas tree to float down from the ceiling, to Alpha's delight. What a waste of a button.
While this jazz is going down, we get one of the many terrible renditions of Christmas music throughout this 24 minute special - "O' Christmas Tree". A Twisted Christmas this ain't. During the song, we see a montage of different locations, with random children placing ornaments on their respective trees. Thrilling. I'm still hoping one of them will shoot their eye out with their BB Gun.
Alpha, being grateful for what he's been given, still wants MORE. Apparently, Zordon's presence or his giving isn't enough for this metal asshat. So Zordon tells Alpha to press a green button for another surprise. Apparently this will bring visitors to the Command Center.
Who will they be? The Power Rangers, who haven't appeared yet in their own special!? Santa's Elves? Bill Goldberg? That dude who loves saying, "GARBAGE DAY!"?
No, the button takes random children out of their homes and brings them to the Command Center. 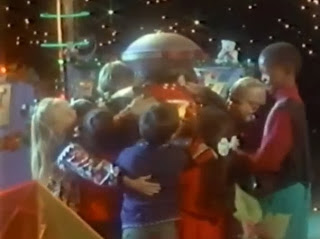 HOLY FUCK - ZORDON AND ALPHA HAVE A BUTTON TO KIDNAP CHILDREN. MERRY FUCKING CHRISTMAS TO NAMBLA.
And to make things even creepier, the children actually KNOW Alpha and Zordon. This is some Neverland Ranch type stuff going on here. And it doesn't help that the kids group hug Alpha during "Here We Come A-Caroling". Seriously, I'm the one who needs Jesus Juice right now.
AND WHO THE FUCK IS SINGING THESE SONGS?? THE KIDS' LIPS ARE BARELY MOVING!!
Alpha is finally happy to have company and wants to party with these kids. By making them create the decorations for the party. What a classy host. So not only were these children kidnapped from their homes and are too stupid to realize that, they're now performing child labor during a less-than-stirring rendition of "Deck the Halls". And we're only SIX MINUTES IN! God help me...
Alpha is very happy with his slaves', I mean the children's work. Alpha then speaks with the children. He asks a blonde kid named Stephen about what he does during the holidays. Stephen says it snows where he lives and loves to sleigh ride. I have a feeling the creators of this special were playing in the snow before filming this, if you get my drift. Alpha then asks the children if they know how to sing "Jingle Bells".
Really Alpha? They're stupid, not mentally disabled. By the way, the song plays while Santa sleighs through the snow. He also dances with a pre-teen girl, while another girl named Suzy claps like a twit.
Speaking of Suzy, she wants to make Christmas cookies. When Alpha agrees, she claps again. Or in this case, they just use the previous clapping clip again. Pinching those pennies - gotta love greed. And of course, the children have to bake the cookies as "Good King Wencelas" plays. MORE CHILD LABOR. And Alpha actually eats the cookies!!
Why?
How?
Another kid named Michael doesn't want cookies. He wants presents. Finally, someone who understands the season of giving. So Alpha decides to finally step in and actually help the children makes gifts during "Up on the Housetop". 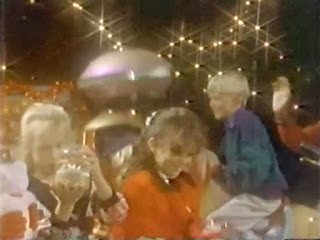 But Alpha doesn't want them opening gifts until Christmas morning. Ha!
An alarm rings and the viewing globe reveals Santa having fun with the six Power Rangers. 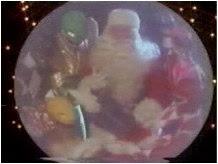 Strangely though, Tommy is seen as the Green Ranger instead of the White Ranger. ...Alrighty. And as Santa sends Alpha his message, his beard is threatening to fall off the man's face. Not only is Saint Nick too lazy to send gifts to children by himself, but he's too lazy to grow an actual beard. Man, times are tough. 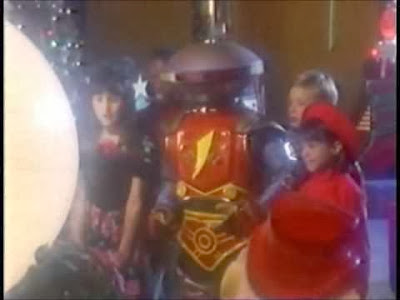 In probably the best [or worst] part of this entire special, the kids ask Alpha what he wants for Christmas. Alpha says that all he wants is to spend time with his best friends, the Power Rangers. And as "I'll Be Home For Christmas" plays, we get an epic montage of moments that definitely give off Christmas cheer. Like...
...Tommy slam dunking a basketball. Or random Rangers smiling for whatever reason. Or Billy doing flips in mid-air. Or Alpha headbutting a soccer ball. Or Alpha doing a head tilt. What about the Rangers high-fiving each other in mid-air?
Yes, all these things remind me of Christmas.
The kids decide to give Alpha a gift to lift his spirits.
RIDDLE TIME: What doesn't need batteries, won't ever run out, and can be taken anywhere?
Give up? It's the gift of LOVE!
*gags and pukes* 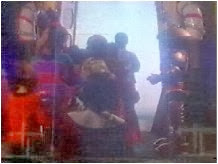 After I take some much needed Alka-Seltzer, Alpha sends the kids away - through a portal of white light. 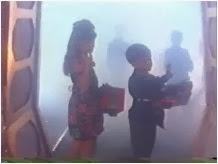 Wow, now he's killing them. That's it kids, head towards the light. Save yourselves from this hell.
Alpha seems happy that he sent these stupid children into the afterlife. All of a sudden, three of the Power Rangers [the ones that needed the extra check after losing all dignity starring in this special] decide to show up. It's Billy, Kimberly, and Tommy...as the Green Ranger?? I thought he was the White Ranger?
Like Rita Repulsa, I have a headache thinking about Power Rangers continuity, or lack thereof. 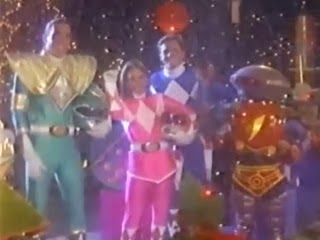 Apparently, new Rangers Rocky, Adam, and Aisha couldn't make it because they were spending time at home with their families. Together. Riiiiiight. 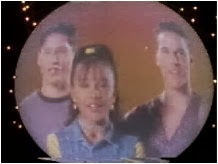 Anyway, Tommy gives Alpha the gift of hoping Alpha has a smile in his heart. 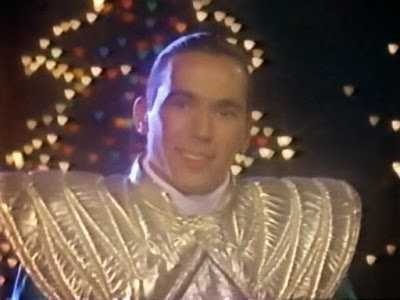 I hate you, Tommy.
Kimberly gives Alpha the ability to have Christmas stay with Alpha all year long. She's lucky she's cute. Billy just wants everyone to be the person they're meant to be in a safe world.
I'm running out of Alka Seltzer here, guys...
The Rangers prepare to leave, but make the Command Center snow just for Alpha. And as "We Wish You A Merry Christmas" plays, we see a montage of random Power Ranger moments that have NOTHING to do with Christmas, but mostly Halloween.
FUCK THIS HOLIDAY SPECIAL.
Barely any Power Rangers. No Lord Zedd. No Rita Repulsa. No Goldar. No fighting. All I saw were kids being kidnapped, being forced into child labor, and being sent off to their deaths - all because a robot wanted company for Christmas. Nothing's shittier on Christmas than ALPHA'S MAGICAL CHRISTMAS!
Oooh, A CHRISTMAS STORY 2. Finally something good.....
Posted by Fred [The Wolf] at 2:35 PM