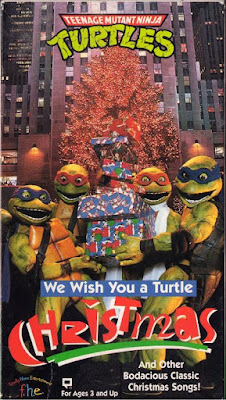 Another year, another ShitMas celebration here at Shit Movie Fest. I haven’t been the most festive person around this time of year for the past few years. I haven’t watched any Christmas movies that are meant to bring the joy and spirit of the holiday in my heart. I haven’t listened to Christmas music that will make me feel jolly. I’ve been watching holiday horror films that show us the dark side of Christmas to match the blackness of my heart. Bah humbug.

Speaking of “bah humbug”, I decided to torture myself this Christmas by watching the infamous “We Wish You a Turtle Christmas” special from 1994. Just when I thought the worst thing about Christmas was watching Alpha-5 and Zordon kidnap children to decorate the Command Center for the Mighty Morphin’ Power Rangers, I stand corrected after watching this shell-shocking Christmas special. Cheap looking costumes, terrible Christmas interpretations, and terrible direction and narrative - Santa is taking a giant dump on my Merry Christmas.

“We Wish You a Turtle Christmas” begins with the Ninja Turtles singing about who they are and the ninja things they do. Or at least I think they’re singing since the giant Turtle mouths are either moving way too much to be in sync, or not moving at all. I guess the Ninja Turtles must have learned telekinesis since the last time I watched any of their adventures. Then after a minute of thrilling credits involving white lettering in front of a black screen, we’re treated to our first musical number.

The Turtles decide to welcome us with a rendition of “Deck the Halls”, reggae style. Right away, I start having suicidal thoughts. Even before the song, the Turtles are speaking with stereotypical New York accents. Joe Pesci and Robert DeNiro are offended by this portrayal of New Yorkers. Then the song starts and Leonardo is suddenly Jamaican! Bob Marley is rolling in his grave now. Speaking of the song, Leo wants to “deck the halls with pepperoni”.

What the fuck does that even mean??

During the song, Donatello asks Leo where his present is. Leo responds by not telling him. The Christmas Spirit, ladies and gentlemen! Leo ends the song by choking himself with his Christmas lights, which would have been my Christmas gift if Leo had actually succeeded in the act. Then again, it’s ShitMas.

After the first song ends, Raphael claims that their Christmas shopping is over. Thank God. That means this special is ov—- oh crap, they didn’t get Splinter a present. Eighteen more minutes of this, oh joy! The Turtles claim that stores close at 5pm, so they better hurry up and get Splinter something.

When in the actual fuck do any stores close at 5pm on Christmas Eve?? My brain hurts…

You know, maybe if they started singing less and actually started shopping, I would be in less pain right now.

And my favorite bit - a set of golf clubs, to which Donatello claims Splinter isn’t athletic enough for those.

He’s a Ninja master and he’s NOT athletic enough??? FUCK YOU, DONNIE.

The Turtles finally make it to the surface, claiming there are only 2 hours left for shopping. Are you serious? How long did all that sewer travel and singing take? I can’t even. And when do the Turtles just start walking in the streets in broad daylight without people freaking out? Out of nowhere, Michelangelo decides that it’s time for some opera singing. I will say that this is honestly the best part of this terrible special, since the song and the singing is actually quite nice.

But you know what happens when something good happens in this special? The rest of the Turtles shit all over it. Mikey’s brothers hate the song and his singing! Yeah, because their terrible crap was better. Mikey is me and the rest of them are this current generation who believe that “Panda” song is quality musicianship. And I don’t know… maybe if they hate Mikey’s singing so much, they could just walk away from the song and actually do some shopping! Just a thought, I guess.

The Turtles claim they only have an hour left to shop, which makes me question whether these Ninja Turtles actually understand how time works since the song was only 3 minutes. Anyway, we have a terrible montage of the Turtles buying Splinter gifts. This leads us to another song called “Wrap Rap”.

Get it? This pun is so hilarious, it must have been written by a current writer for Saturday Night Live. Leo raps about wrapping gifts for like 2 minutes, which is 5 minutes longer than this song had any right being. Started from the sewers and now we here, yo. The Turtles wish each other good night, giving me hope that they’ll never wake back up.

Unfortunately, Christmas arrives and some furry creature greets them as the Turtles exchange presents. This creature does look and sound kind of familiar…. 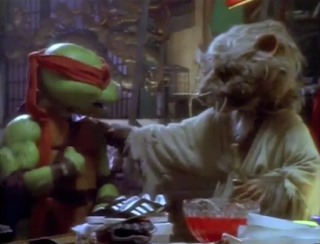 Oh my God, what have they done to Splinter?? He looks like a wet possum!

Splinter decides to sing about the “12 Days of Christmas”, and I start wishing I had 12 different weapons to end my life. What did they give this poor rat, by the way?

12 April O’ Neill autographs. (Because he’ll get a penny each for each one on eBay)

11 pairs of sneakers (Every rat needs a pair of Jordans)

7 silk kimonos (For when Splinter entertains a lady friend)

6 frisbees (I thought he wasn’t athletic?)

2 comic books (Well they are expensive these days)

1 pizza with pepperoni (I hate this damn special)

I love that at one point, Splinter forgets the lyrics and just moves the show along. Even he’s sick of this Christmas special. Leo even comments about the song being the longest ever. Now it’s being self-aware. Too late to impress me with your meta ways, Turtle Christmas.

And why are there like 5 kids in the sewers with Splinter and the Turtles on Christmas Day anyway? Oh God, they watched “Alpha’s Magical Christmas” and decided kidnapping children was a Christmas tradition! NAMBLA had destroyed this commercial holiday for 90s children everywhere!

Splinter thanks the Turtles for the gifts, but reminds them that the holiday is about sharing and being with those you love. So Splinter pretty much negated the entire premise of this special, as well as reminding me that I don’t love myself for watching this piece of crap. They then sing “We Wish You a Turtle Christmas”, but I’m too busy drinking myself to a stupor to care by this point.

Look if you’ve seen “We Wish You a Turtle Christmas”, you know how terrible it is. It won’t bring you Christmas cheer. It’s a waste of 23 minutes. Terrible songs. Insulting New York stereotypes. The costumes are awful. It’s one of the worst Christmas specials ever. For those who hate those Michael Bay produced films, watching this will change your mind on those movies. Even the Shredder avoided appearing in this, which should tell you something right there. Avoid like the plague and burn this alongside your Yuletide log. ShitMas at its finest. Or worst, depending on how you look at it.
Posted by Fred [The Wolf] at 9:43 PM