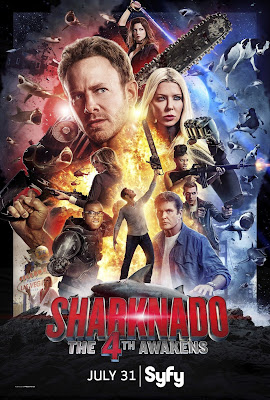 Plot (from IMDB): Five years after the East Coast was ravaged in 'Sharknado 3,' Fin (Ian Ziering) and his family have been blissfully sharknado-free, but now sharks - and 'nados. - are being whipped up in places (and ways) that are completely unexpected. 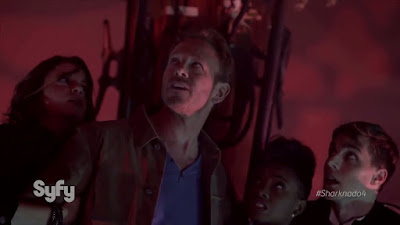 Review: Another year, another SHARKNADO movie on SyFy. Who would have believed that a really stupid B-movie from 2013 would become one of the biggest film franchises of the modern era? I think I’ve been one of the biggest supporters of this franchise, reviewing each installment year after year, hoping to get it out there that these films can be fun if you just sit back and enjoy them. I re-watched the previous three films prior to seeing SHARKNADO 4: THE FOURTH AWAKENS, realizing that the first film wasn’t really as good as I remembered it, but loving the second film for knowing exactly what it was, and the third film - which does the same, but tries a bit too hard at times. Even with its clever title and known cameos, I wasn’t expecting much out of this sequel. By this point, I figured the well was very dry and the series had peaked with the second one. But color me surprised - as I found this fourth installment to be the most fun and quicker paced film of the entire franchise.

The story is what you’d come to expect with a SHARKNADO film. The characters are still the same, even though some of them have gained extra perks and arcs that could lead to interesting future developments. I liked the film had taken place five years in the future, with the shark problem finally solved - at least when it concerned water sharks. The idea of having a variety of sharknadoes that involved sand, oil, electricity, radioactive chemicals, and so on kept the narrative going for me. It’s a dumb plot and doesn’t make a lick of sense, but I’m glad the filmmakers tried to give us an evolution of what had been established and tired by the third film. The sharks became more of a threat and I kept being amused by the different types of storms that threatened our heroes. I also enjoyed that the film was centered mainly on the Shepard family, bonding them stronger as a unit against these sharks. It sucks April survived [damn you, viewers], but she did have some chuckle-worthy moments in her new character. Plus, seeing a five-year-old with a chainsaw is not something you see everyday. The ending pretty much tells us where the series is going in the fifth film, which I’m kinda hoping is the last one. I mean, what else can you do by this point?

I think the best part of the script for me were the throwback to famous pop culture moments or dialogue that fit well with the situation. We get the obvious STAR WARS homages, including the classic opening in SHARKNADO form and a character begging to “Stay on target!”. We get a few TERMINATOR references for April. Lloyd Kaufman makes an appearance to “Nuke ‘em high”. There’s an Action Comics #1 cover homage. The awesome Baywatch reunion with David Hasselhoff, Alexandra Paul, and Gena Lee Nolin is great. Christine, the car, makes an appearance with Steve Guttenberg’s LAVALANTULA character. Gary Busey is wearing the same glasses he wore in THE BUDDY HOLLY STORY. And the best stuff was with Caroline Williams, speaking in her heavy Stretch accent from THE TEXAS CHAINSAW MASSACRE 2, claiming that “the Saw is Family” and that “it wouldn’t be Texas without a chainsaw massacre”. Clever stuff that worked better than it had any right to. 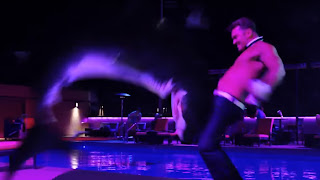 The direction by Anthony C. Ferrante, who has directed every single one of these films, is what you’d expect from this series - except I felt the pacing and flow was a long quicker for the better. I’m sure this was done to compensate for a weird script, but SHARKNADO 4 had the most visual energy and style of the four films. There was never a lull in the film like in the previous three. We’d get certain character stuff really quickly before an action sequence pops up. I also felt some scenes looked really cool. In particular, the pirate ship scene at the start looked inspired by Dario Argento with its red, blue, and green vibrant colors. The final act resembled a Saint’s Row video game, as it was visually chaotic - but again, I liked that. The CGI is still as cartoony as before, and I wouldn’t have it any other way. I felt Ferrante was very inspired with this installment, sort of directing with the same energy he had while filming the second film in New York City.

The acting isn’t the greatest per usual, even though I felt the quality was a bit above the other films. Ian Ziering is still the same straight man as Finn, playing a wannabe superhero that gets to do cool stuff. Tara Reid is back and she didn’t annoy me as much as she had in the previous films. I think it’s because I could tell she was having more fun with her new role and being more comfortable. She seemed more engaged this time around. David Hasselhoff is still one of the coolest dudes in the room. Cody Linley seems to be having fun starring in a SHARKNADO movie. Tommy Davidson seemed to forget he was in a SHARKNADO movie, actually acting well in his role and really standing out amongst the other actors. Gary Busey halts the crazy, playing his role a bit more subtle than expected. Stacey Dash uses her current pop culture persona to her advantage as the mayor, leading to an awesome WIZARD OF OZ moment [there are a lot of those here]. The cameos here are pretty cool as well. We get Seth Rollins, Gilbert Gottfried, Carrot Top, Adrian Zmed, Lloyd Kaufman, Caroline Williams, Dr. Drew, Corey Taylor, the Chippendales dancers, the Millionaire Matchmaker, Steve Guttenberg, and Gena Lee Nolin and Alexandra Paul from Baywatch. Plus Christine, the car, makes an appearance! I thought the cameos really worked here. 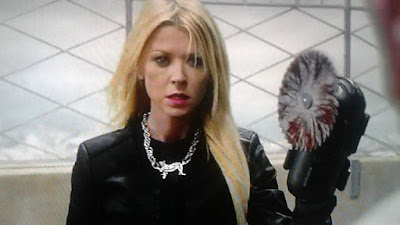 SHARKNADO 4 continues the level of CGI violence we’ve come to expect. The sharks seem weaker this time though, exploding pretty easily from just simple punches, kicks, and pelvic thrusts. We get the regular decapitations, sharks sliced in half with chainsaws, sharks squashing people, etc. We also get other animals doing some damage as well, such as cows and whales. The final act alone is chaotically violent in a cartoon way.

The sexuality in SHARKNADO 4 is standard. Chippendale dancers, Tara Reid shows her enhanced cleavage, and the Baywatch babes. There’s something for everyone.

The cheesiness is off the charts here. Nukenado? Oilnado? Firenado? Sandsharknado? Tara Reid as a cyborg with a battery pack? People with superpowers? Sharks with spikes? A lot of funny one-liners from famous films? We even get a space segment that starts with the classic STAR WARS opening. Yep, cheesy as hell. 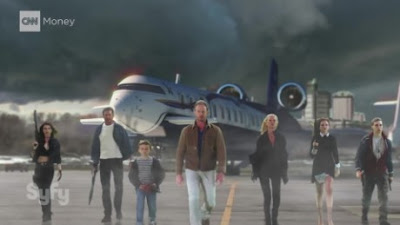 The Final Howl: Look, if you’re not on the SHARKNADO bandwagon by now, you will never be. If you love SHARKNADO, you’ll really enjoy SHARKNADO 4: THE FOURTH AWAKENS. If you don’t like SHARKNADO, don’t bother and don’t try and ruin it for the rest of us. Bad acting, bad special effects, a silly narrative, and just a great sense of fun, amusement, and campiness. I personally feel that SHARKNADO 4 is the best of the series, as it went by super fast and genuinely made me laugh and mark out over certain pop culture references. Sometimes I want to watch serious movies. Other times, I just want to escape in the bizarre world of SHARKNADO. This was a lot of fun. Bring on the fifth one!