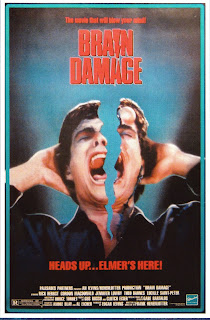 While he does have a cult following, Frank Henenlotter isn’t a name many horror circles talk about a whole lot. He’s not as crisp of a filmmaker as John Carpenter. He didn’t bring the genre back into the mainstream like Wes Craven. And he didn’t shock people in a polarizing way like Eli Roth, James Wan, and Rob Zombie. Whenever Henenlotter is mentioned, it’s usually concerns 1982’s BASKET CASE, an insane low-budget horror film involving a twisted tale of conjoined twins on a quest for revenge. It’s considered a horror classic by many and one of the many inspirations for low-budget horror directors quickly after [along with Sam Raimi’s THE EVIL DEAD]. Others mention 1990’s FRANKENHOOKER due to its clever name and content.

But rarely does 1988’s BRAIN DAMAGE gain the same kind of attention. Maybe it’s because it feels like the middle child between two big cult films. Maybe it’s because horror fans weren’t too fond of the film at the time, due to how much the MPAA had butchered it before its release. Thankfully, an uncut version was finally released in the late ‘90s. And while BRAIN DAMAGE has gained a good cult following since its release, it’s usually mentioned third after BASKET CASE and FRANKENHOOKER in some circles. I find it strange, since BRAIN DAMAGE is probably the best of Henenlotter’s films and worthy of more attention than it usually gets.

PLOT
Brian (Rick Hearst) wakes up to find out that some sentient wormlike parasite called Aylmer (voiced by John Zacherie) has decided to burrow itself in his neck and effect his brain functions. Brian quickly realizes that Aylmer needs to survive on a constant diet of human brains and wants to control Brian to find victims. Usually Brian would be against this, but he relishes the feeling of Aylmer injecting a highly addictive blue fluid into his brain that fogs his memory and makes him hallucinate really strange things. Due to these events, Brian has neglected his girlfriend Barbara (Jennifer Lowry) to the point that she runs into the arms of Brian’s brother (Gordon McDonald). As Brian realizes Aylmer is doing more harm than good, he does all he can to make sure both his brother and girlfriend don’t become victims themselves. 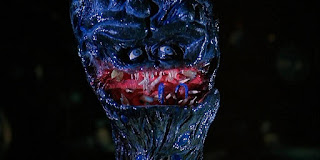 It had been many years since I last watched BRAIN DAMAGE, forgetting all about the film until I saw someone mention it on social media due to a gorgeous blu-ray that was released recently. I decided to sit down and check it out, forgetting how great this horror-comedy is, while carrying a strong anti-addiction message that deserves more respect and recognition. Don’t get me wrong - I absolutely love BASKET CASE, as it never fails to entertain me. But let’s be realistic - BRAIN DAMAGE takes the similar concept presented in the previously mentioned film and does it ten times better due to its strong storytelling and unique visual presentation.

BRAIN DAMAGE reels me in due to its story and how well written it is. Henenlotter loves using the theme of symbiotic relationships between a man and some freak of nature that only he understands. And while it’s presented as more of a creepy mystery in BASKET CASE to shock audiences, BRAIN DAMAGE uses the same concept to tell its audience a strong message about addiction. It’s sort of the B-movie equivalent of those drug commercials with that frying egg on the hot pan. Drugs will fry your brain, just like how Aylmer fries Brian’s brain. Even though Brian knows this worm creature isn’t totally on the up and up, the high he receives each time Aylmer attaches himself to Brian is a pretty accurate depiction of an addict. There’s even a scene where Brian tries to do cold turkey away from Aylmer, only for the creature to smugly mock him and force Brian to beg for his help. This is a common story with addicts, who believe they can hear their addictions talking to them as if they’re the only friend they’ll need. Even Brian’s relationships with people in his life and the world around him deteriorate quite fast, due to his willingness to please only Aylmer and the high he feeds Brian. For a silly creature feature, it takes a serious subject [that was extremely topical at the time] and portrays it excellently. BRAIN DAMAGE is never subtle about it, but it never really forces it on you either.

The characters aren’t deep or anything, but they’re not unlikeable or hard to relate to. We barely know who Brian is before he succumbs to his addiction, since Aylmer possesses him right from the start without any sort of backstory. In a way, it’s as if this creature has raped Brian in his sleep and Brian suffers from some sort of Stockholm Syndrome to maintain the pleasant feeling he receives from Aylmer. It could also be a clue that Brian was weak-willed to start with, and Aylmer took advantage of that vulnerability. Brian does seem to have a decent relationship with Barbara, who adores her boyfriend in an almost obsessive way. It’s like she’s addicted for Brian’s affections towards her! Brian also shares a weird relationship with his brother Mike, who loves Brian so much that he’ll take the first chance to bang Barbara. There’s also this strange fantasy where Brian hallucinates having a threesome with Barbara and Mike, almost insinuating some sort of creepy incest element that doesn’t get fleshed out thankfully. There seems to be something going on with Brian that the film never fully develops, but BRAIN DAMAGE doesn’t really need to. The fact that he takes to Aylmer so quickly and decides to deal with his nonsense for a quick fix proves that Brian is a victim mentally and emotionally. 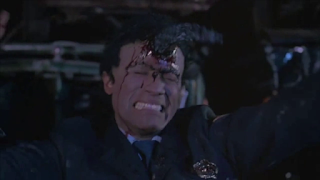 Speaking of Aylmer, he’s obviously a smart villain that has no problem taking advantage of people weaker than him to get what he wants - which are human brains that he enjoys feasting on. He’s apparently been around for centuries, attaching himself to others to do his dirty work. He’s also quite the charming wormlike fellow, making us see why Brian [or anyone else] finds him alluring. Plus, he has an interesting visual design with his tiny eyes and weird needle-like teeth. Plus, he has a great singing voice. Why wouldn’t anyone allow him to eat their brain?

Frank Henenlotter and the special effects team do a really great job on a small budget, even though I believe BRAIN DAMAGE cost more money to make than what was used to film BASKET CASE. It’s a more ambitious film than BASKET CASE for sure, which shows the growth of confidence Henenlotter achieved between the two films. The hallucination, trip out scenes are done really well with neon colors that pop out and make you experience the high Brian is feeling. The camera moves smoothly, giving us great angles and shots that build tension and reveal a lot about the characters and the setting of New York City in the late 1980s. Henenlotter also relies a lot on the color blue. Aylmer’s hallucinogen is a blue fluid, while a lot of the scenes where Brian is high are shot with blue hues that add a ton of atmosphere. I especially love the first hallucination sequence where Brian is submerged into the blue fluid. My only minor issue is the repetitiveness of Aylmer shooting his fluid to get Brian high, which is done like four or five times. But overall, it’s beautiful filmmaking from a man you wouldn’t expect that from.

As for the special effects and gore, you won’t be disappointed here. You get a lot of stop-motion sequences, along with multiple moments of Aylmer burrowing himself inside people’s skulls to eat brains. Aylmer, himself, looks quite silly but you get over it due to how he’s portrayed and the voice acting. There’s a creepy moment where Brian pulls his brain out of his ear in a blood-soaked scene that would make Sam Raimi proud. And probably the reason for the uncut version of this film - a very memorable scene of fellatio gone bad where Aylmer enters the mouth of a woman as she gives Brian oral stimulation. It’s gross, shocking, and one-hundred percent funny. BRAIN DAMAGE definitely uses its budget well. 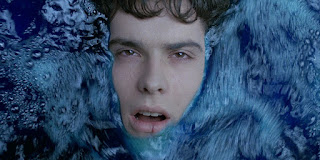 The acting isn’t really much to write home about. But it’s definitely an upgrade of the campiness of BASKET CASE, which wouldn’t work for this film at all. Future soap opera actor Rick Hearst does really well as Brian, convincingly playing an addict who happens to be addicted to a puppet. Considering the type of film he was in, Hearst took it entirely seriously and made Brian as fully a fleshed-out character that the script would allow. I’m not surprised he went on to work on multiple television shows. He has the chops. Gordon MacDonald and Jennifer Lowry were okay as Mike and Barbara. They didn’t really get a whole lot to do but played their supporting roles well enough to make the premise work. And I can’t end this review without mentioning former television horror host and singer John Zacherle. He gives Aylmer so much personality just with his voice, bringing the character to life and making you forget you’re watching a silly looking puppet destroy a young man’s life. I think he was the perfect voice for the character and I loved his singing voice during the cold turkey scene. Just great stuff.

Plus, we get a cool cameo from a familiar guy carrying a basket on the subway. 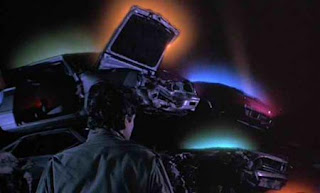 I'm very happy that I decided to revisit BRAIN DAMAGE after not having watched it in many, many years. It’s one of the finest anti-drug films and a clever low-budget film by Frank Henenlotter that proves how good of a horror filmmaker he is. The film has a message that’s presented well, solid acting by the two leads, slick direction, and pretty cool special effects considering its budget. BRAIN DAMAGE is smart, clever, funny, creepy, and satisfying for anyone looking for blood and guts. If you enjoy BASKET CASE and/or FRANKENHOOKER, I have no doubt BRAIN DAMAGE will be up your alley. Definitely recommended, but be careful - you may gain an addiction from the film’s awesomeness.