The Watchtower of Justice: The Wolverine (2013) 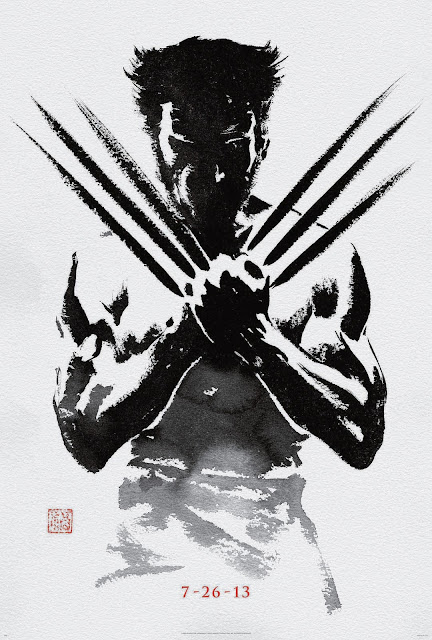 If you were to ask me who my top favorite superheroes are in comics, I have a long list but four who have been with me since I was a child. Those four costumed heroes are: Batman, Superman, Spider-Man, and Wolverine. Now if you asked me who I thought was the most badass DC and Marvel character, my answer would be Batman and Wolverine. While Batman is a billaionaire disguised as a vicious beast, Logan/Wolverine IS a vicious beast in and out of costume. He doesn't need gadgets. He is the weapon with his claws that can cut through anything and everything. But, he also has his "I'm going to fucking kill you bub" attitude that adds to his badassery. While I was introduced to Batman due to the blockbuster movie starring Michael Keaton as The Dark Knight and Jack Nicholson as The Joker, I was introduced to Wolverine and the X-Men thanks to Saturday mornings on Fox Kids with the X-Men: The Animated Series that came on right after Spider-Man. Marvel was my Saturday mornings while DC was my summer cinematic fun (Batman), week day afternoons with Batman (The Animated Series), and weekend nights with Superman (Lois & Clark).

That all changed in the summer of 2000 when director Bryan Singer unleashed the X-Men movie that made a star out of Hugh Jackman and sparked a wave of superhero cinema that is still going on to this day. After the success of X-Men, Singer returned with the even better sequel, X2: X-Men United. Singer dropped X-Men 3, which later became titled X-Men: The Last Stand where Brett Ratner replaced Bryan Singer in the director's chair who wanted to fulfill his long term dream by trying to resurrect the Superman movie franchise with Superman Returns. The X-Men franchise found itself in a slump with poor fan reaction to The Last Stand, which was trying to adapt the Dark Phoenix Saga storyline yet failed badly. So, Fox decided to give the most iconic X-Men mutant his own movie that told the origin for how Logan became Wolverine thus releasing X-Men Origins: Wolverine in 2009. Again, fans cried foul especially due to screwing up a fan favorite character named Deadpool in the final act of the film. So then Fox tried to relaunch the franchise again with 2011's prequel/reboot X-Men: First Class that told the origin of Professor Charles Xavier and X-Men villain Magneto. First Class was much better received than The Last Stand and X-Men Origins: Wolverine. While developing a sequel to First Class which is now both a sequel to that film and to the original X-Men movie trilogy titled X-Men: Days of Future Past which will be directed by Bryan Singer, actor Hugh Jackman who has now been playing Wolverine for 13 years wanted to make another solo Wolverine film. But, this time it was to take place after the events of The Last Stand and take place in Japan since Jackman was a huge fan of the Japan Wolverine comics. Thus, gives us this summer's The Wolverine.

After X-Men: The Last Stand, Logan/Wolverine has become a recluse. He's left what is left of his fellow X-Men behind and has become a drifter. He's also been having nightmares about his love Jean Grey who he had to kill in order to save the world.  After getting into a bar fight, Logan is greeted by a Japanese woman named Yukio. It turns out that Logan saved a man from being killed by the Atomic Bomb when it was dropped on Hiroshima and the now old man named Yashida wants to thank him and give him a reward. That reward is to take away his mutant power to heal and his immortality. To make him Human. Logan is hesitant, but then Yashida dies. Before he can leave Japan, Yashida's granddaughter Mariko is being tracked down by ninja assassins as well as a mutant named Viper so Logan makes himself her bodyguard sorta speak. But, there's just one problem, Viper has taken away his mutant abilities, leaving Logan mortal. Can Logan still be The Wolverine without his immortality or will the ninja assassins, Mariko's fiance', Viper, and Silver Samurai finish him once and for all?

I'll cut right to it. I think Wolverine works better with the X-Men than he does on his own.  That is not a knock on the character. I love Wolverine. He's the kinda dude you just want to go out drinking with and then sit and watch him beat some asshole to a bloody pulp before raising his claws to their throat and saying, "Had enough, bub?"  I love this character! I was this character for Halloween one year. I used to have a poster printed out of this character on my bedroom wall. I have a few action figures of Wolverine. But, Wolverine to me works best when he can play off Professor X, Cyclops, Rogue, Storm, and the whole team. That's not to say that The Wolverine is a bad film because it's not. It's not a great film, but it is a good entertaining one.  Yet at the same time it kinda underwhelms me. It didn't have me excited like I was watching X-Men and X2: X-Men United or thrilled watching X-Men: First Class. Plus, another thing that goes against it is that I highly enjoyed both Man of Steel and Iron Man 3 way more. They brought the big action and excitement that I look for when watching a superhero film. They gave me plenty to talk about. But, sadly The Wolverine gives me little to talk about.

The biggest thing I can say is that this is probably Hugh Jackman's best performance as Wolverine. The man is a legit badass. He IS Wolverine. At the end of the day, he is the only character you will remember. He's the star of the show. Not the story. Not the villain. Not the supporting characters. It's Wolverine/Hugh Jackman that delivers and keeps this film afloat.  While this film is better than X-Men Origins: Wolverine, I personally thought that that film was much more entertaining than this was. That had plenty of mutants to keep the show interesting. Not just some snake lady and Wolverine of course. I don't hate X-Men Origins: Wolverine at all like most of you surely do. I thought it was a fun yet pretty average superhero film. But, where this film really fell apart was in the last act. Talk about a twist that had me rolling my eyes. Say what you want about the Mandarin twist in Iron Man 3, but at least that got me and I thought it was genius. This, I just couldn't get into this one. Plus, there's so many scenes that could have been much better, but didn't go far enough. Like the ninjas in the streets scene. But, the mid-credits scene was worth sitting through this whole film, which obviously sets up for next summer's X-Men: Days of Future Past. The acting was decent with Hugh Jackman standing out over all the rest. The direction by James Mangold was okay. That train top scene really stands out.

Overall, The Wolverine was a good but not great movie. Better than The Last Stand and Origins? Absolutely. But, better than X-Men, X2: X-Men United, or X-Men: First Class? Hell no. I think X-Men: Days of Future Past will claw this film to pieces, bub.