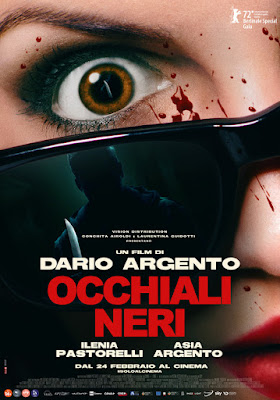 Diana, a high-class prostitute trying to escape from a serial killer, suffers a car accident that leaves her blind and kills the family of Chin, a ten-year-old boy.

DARK GLASSES, the newest feature film by Italian horror maestro Dario Argento, was streamed for the first time on Shudder as a surprise screening. It was a welcome surprise, although Argento’s peak has passed him by for decades now. Personally, I feel 1987’s OPERA was the director’s last great movie, even though films like 1996’s THE STENDHAL SYNDROME and 2001’s SLEEPLESS managed to stand out for their high quality amongst the poor films he made since the start of the 1990s. 2012’s DRACULA 3D was just atrocious and probably his lowest point, which made me somewhat weary of DARK GLASSES, his first film as a director in 10 years.

But the premise had me intrigued. Not only was DARK GLASSES a film Argento had written in 2002, but it involved a blind character getting mixed up in a giallo involving a serial killer murdering prostitutes in Italy. Argento is great at giallo films. The blind lead character isn’t a new trope in horror, but it’s not one that has done a whole lot in this kind of sub-genre. Considering Shudder was making a huge deal out of this, my hopes were kind of high for this one.

Unfortunately, I expected too much out of a new giallo by a man who was a master at making them back in the day. All the elements are there - a gloved and mysterious killer, detectives trying to help a confused and vulnerable victim and nasty murder sequences. But the film never comes together for several reasons.

The main culprit is an ironic one - the screenplay that Argento had plotted twenty years ago. The film starts off well. It focuses on Diana, a prostitute who is minding her own business and is trying to survive in Italy. She has some nice and generous clients. She has some creepy ones that should send red flags. Her profession has also made her the target of a killer who has an issue with prostitutes. During her initial encounter with this killer, Diana is driven off the road into another car with an Asian family inside - killing the father, putting the mom into a coma, making the child a temporary orphan and leaving herself blind. While she struggles with her new condition, she learns to cope with it through the help of a blind caretaker named Rita [and a seeing-eye dog named Nerea] who makes her see that she can still live her life, just in a different way. Along the way, the orphaned child Chin attaches himself to Diana and helps her try to survive as the killer plans on finishing the job he started with her.

That above paragraph makes DARK GLASSES sound better than it actually is. The first twenty minutes is classic Argento giallo. We establish the main character. We get some gnarly kills - the first one being a knife to the jugular that unleashes a lot of blood. Then the car accident scene is just well-staged and really lands an impact on you at how brutal and sudden it is. Even the first scenes of Diana being blind and having Rita help her as she struggles with her condition are great stuff. 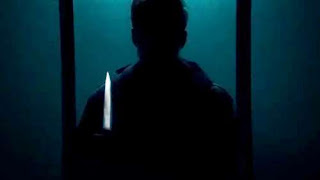 But then the narrative just falls off a cliff for whatever reason. When Chin befriends Diana and they struggle with their new dynamic, you should feel more connected to it as an audience. But I didn’t think the two characters really had any chemistry and got annoying the more time they spent together. The characters also make some of the dumbest decisions as they’re being chased and targeted by this killer, making me wonder how bad the killer really was if these protagonists survived as long as they did. The detectives on the scene are also really stupid and it was hard to feel sorry for any of them when bad things happened to them.

What really ruined the film for me was the killer’s motive. I won’t spoil it, of course, But really Argento - this was the best you could come up with? I thought it was super weak and made me stop caring about anything that happened after the reveal. I would have taken something really convoluted over the actual lame reason why this killer was targeting these prostitutes. What a disappointing mystery that could have elevated the script.

Also, DARK GLASSES is way too short. There’s a lot going on in this film, especially when it focuses on Diana’s adjustment to her blindness and the relationships she makes because of it. Everything feels rushed and edited to a point where things can’t develop properly, making these relationships feel underdeveloped and cold to me. Even the killer is barely a focus in this film, which makes the bad motive even worse because while established, it’s not given enough depth to be anything more than laughable and ridiculous. This is a movie that could have used an extra twenty minutes to really develop plot elements to make for a stronger story. Instead, we get this abridged version of a giallo that should have been better than it actually is.

Other than that, the rest of DARK GLASSES is fine. While not as colorful or as stylish as his previous peak work, Argento still manages to show that he still knows how to direct a giallo. The first half, in particular, is his strongest stuff. There’s good tension and mood happening. The first kill is pretty nasty and increased my interest in the movie. The car chase is also well shot and thrilling at times. Even the quieter moments are handled and paced well, making the audience look around to see if the killer is still in stalk mode while Diana has never been more vulnerable. I think the film loses itself in the last half with odd pacing, weird edits, and a flat ending that does no one any favors. But Argento’s work here is better than his last batch of films, to be honest. I just wish he had a better script to work with. 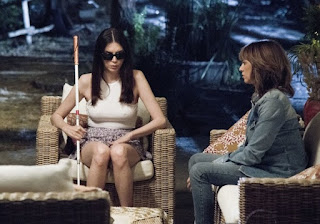 The actors are also fine. Ilenia Pastorelli does a good job as Diana, convincingly portraying a woman who struggles with her sudden blindness while trying to escape a murderer. Pastorelli nicely brings about a freedom in her performance at the start, believably changing into a more introverted and frustrated persona once the blindness becomes a factor. I also liked her fear towards the end of the film, as I couldn’t imagine facing a killer blind.

The supporting cast does their job as well. In particular, Asia Argento does a nice job in playing Diana’s caretaker and friend, Rita. She doesn’t get to do a whole lot, but she brings a calming presence to the film. Andrea Zhang is okay as Chin, although he gets kind of grating by the end of the film. I know Argento was trying to build this surrogate mother-son dynamic between Pastorelli and Zhang, but I never really bought it as much as the two tried.

And special mention goes to Arnaud Rebotini’s score. Originally planned for Daft Punk before they retired, Rebotini provides music that’s loud and thumping. It’s not Goblin, but it fits the film well and adds a cool atmosphere to the film - which it needs.

While an improvement over his last works as a director, Dario Argento’s DARK GLASSES still manages to be a disappointment considering all the elements are there to create a memorable giallo. Focusing more on the blind victim and an orphaned child instead of the serial killer who has targeted them and caused this trauma for them is an interesting approach for a giallo, as it should allow the audience to connect on a human level rather than just focus on the mystery and the violence that comes with it. Unfortunately, the screenplay isn’t strong enough to tell that kind of story with characters behaving in ways that make you care less about them as the film rolls on. The movie is also way too short, as it feels like an abridged version of a larger story, editing out all the character development and relationship dynamics needed for an audience to really connect with what they’re watching. And I won’t even mention the ridiculous motive for the villain of the film, which pretty much took me out of the film once it was revealed. I can’t believe Argento thought it was a good move to make.

That being said, Argento’s direction [while not anywhere close to his peak] is still pretty good, as some of the murder sequences are gnarly and the car chase scene is shot well. There’s a nice atmosphere and tension that plays throughout, although I do miss the more stylish and colorful films of his past. The actors are fine, especially Ilenia Pastorelli as the lead who struggles with becoming blind due to a killer who has targeted her and continues to do so in her vulnerable state.

I love Argento’s giallo films, but DARK GLASSES is a mixed bag for me. But it’s a way better movie than DRACULA 3D, so that’s gotta be worth something at least. Unfulfilled potential, in my opinion.