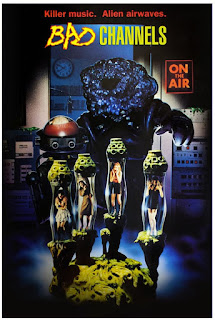 An alien determined to capture human females takes over a radio station to do it. 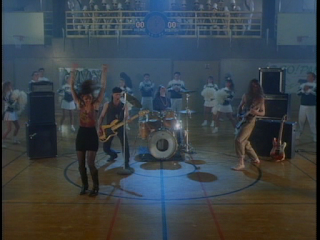 It’s been a long time since I’ve reviewed a Charles Band produced film, but here we are with BAD CHANNELS - one of the oddest horror/sci-fi films I’ve seen in a while. I shouldn’t have been surprised since it was directed by TERRORVISION and SUBSPECIES director Ted Nicolaou - two films I really need to rewatch since they’re both pretty rad. BAD CHANNELS isn’t as good as either of those two films, but it has some moments within its short 88-minute runtime.

BAD CHANNELS may be one of the easiest, or maybe one of the more difficult, films to give a full review to because there’s really not much to the film. It has aliens [or one alien and his robot companion] invading a radio station and using music to lure hot women into tiny jars… to kidnap them I guess? The film never really makes it clear why these aliens are manipulating women into jars, which is a big issue in itself. The film also has news reporters who are obsessed with the radio station’s DJ [I guess he’s a big deal in this town]. But other than that, there’s not much else going on.

The main purpose for this film doesn’t seem to be about the alien invasion, but to promote unknown rock bands for the Full Moon Entertainment audience. After some research, I learned that these bands were signed to Moonstone Records, which is owned by Full Moon Entertainment. To be honest with you, the music nor the videos are anything memorable enough for me to rush out and buy the bands’ music. The videos use the movie locations. One is inside of a diner. The other is in a school gymnasium. And the other is in a hospital. They’re not really directed all that flashy or in an MTV-style at the time. I will say that the last song, this metal song with clowns, was actually pretty good and made use of the horror genre element. And while the videos themselves aren’t directly all that interestingly, having the female victims being shown in reality dancing to music no one else can hear [while the people around them look on curiously and disturbingly] is a nice touch and shows that these videos are nothing but illusions in the victims’ minds. But honestly, the film doesn’t have much of a plot and it seems BAD CHANNELS was more focused on getting these unknown bands some notoriety that probably never happened. 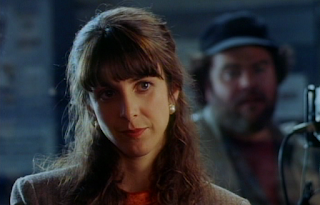 The characters aren’t all that likable either, even though they all seem to have personalities that separate them from others. DJ Dan O’Dare is a manic Lothario who is pretty much the narrator of what’s going on with the aliens inside of the studio, since he’s trapped there. He has unresolved sexual tension with ace reporter Lisa Cummings, who is kind of a bitch and snotty - making me wonder why Dan would be interested in her. The cops are clueless. Lisa’s news channel bosses want to take advantage of the situation and use Lisa to make themselves bigger than her. The doctors are clueless. The aliens’ victims are ditzy, ignorant, or just plain dumb - mainly getting ahead in life due to their hot looks. Besides Dan really, none of the other characters make much of an impression character wise.

I will give a lot of credit to the creature designs in BAD CHANNELS though. The film is obviously using a cheap budget, but the filmmakers make the most of it. The main alien is pretty much a dude dressed in black pleather, while wearing a giant boulder for a head that looks like a Jiffy Pop with a clear visor in the middle so they can see. The robot has google eyes while wearing a clear bowl on its head that reminded me of Bill Moseley in SILENT NIGHT, DEADLY NIGHT 3. We also get this green gunk that grows like fungus, which also happens to move if music plays nearby. And we also get this three headed plant monster that Audrey II would laugh at, but it doesn’t look too bad. And the effects of the girls inside these tiny jars is done well and believable.

I even thought the direction by Ted Nicolaou wasn’t too bad, besides the music videos that ruin the film’s pacing a bit. The film looks like your standard 90s straight-to-video fare, but a better-than-average looking one. The film moves quickly. The special effects are used sparingly and presented well. It looks and feels like a Full Moon Entertainment B-movie, which is the exact point. Nicolaou also connects the film with the DOLLMAN series as well, which is a nice touch for fans of that series. 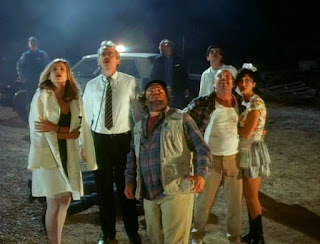 The acting isn’t anything great, but the cheesiness of it entertained me more than it should. Paul Hipp is probably the “best” actor, as he’s given the most to do and carries the film pretty well. He has a manic energy and his descent into madness while being taken hostage by weird aliens is pretty amusing. Original MTV VJ Martha Quinn is okay in her role as reporter Lisa. She plays bitchy well, but doesn’t really get much to do but stare, look confused, and carry a camera to shoot footage. The other actors play their roles as goofy and silly as possible, which works well with this type of movie. The actresses who become alien victims play the video vixen roles well and make their ditzy roles fun to watch. I was honestly expecting worse when it came to the acting, but the hamming and being aware of what film they were in helped the entertainment value.

And I have to mention the cool Blue Oyster Cult score, which is a pretty big get for Full Moon Entertainment. Sure, the band wasn’t as popular as they were in their heyday during the 70s and early-80s, but it’s cool to have a solid band working on your movie. I dug what they brought to the table and the film is probably worth watching just for the score alone. 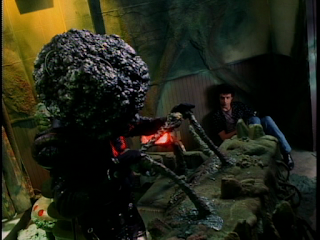 BAD CHANNELS is an odd movie that seems to exist to promote three unknown rock/metal bands rather than tell an interesting story about aliens invading a radio station to shrink hot women into glass jars for whatever reason. It’s unfortunate since the music videos aren’t all that interesting or memorable to watch, leaving us with a sci-fi/horror-comedy that barely has a plot and doesn’t explain what is happening to many of these characters at all. We don’t know why these aliens came to this particular town. We don’t know why these aliens are shrinking beautiful women into glass jars. All we get are some pretty unlikable or silly characters that become less amusing as the film goes.

That being said, the special effects are pretty well done considering the film’s small budget. The hammy and cheesy acting is more entertaining than it has any right to be. Director Ted Nicolaou’s direction is more than passible and keeps BAD CHANNELS at a good, short pace despite these random music videos ruining the flow somewhat. And the score by rock legends Blue Oyster Cult is pretty rad and quite an impressive get for this film. It looks like a Full Moon Entertainment feature. And it feels like a Full Moon Entertainment feature. BAD CHANNELS is a film that pretty much met my low-to-average expectations and is only worth a look for anyone who enjoys Charles Band produced movies [especially the DOLLMAN series, which this film is slightly connected to]. Otherwise, stick with the much better SUBSPECIES or TERRORVISION for your Ted Nicolaou fix.