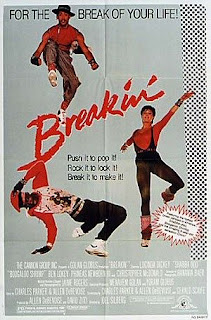 Even though films like SKATETOWN U.S.A., XANADU and ROLLER BOOGIE weren’t critical or commercial successes, Hollywood never faltered in taking opportunity to produce a film around a fad that was most likely fading away by the time the film was actually released. Films about dancing were pretty huge in the 1980s, especially as MTV started to gain momentum and present the art to a mainstream audience to sell records and soundtracks. Films like FLASHDANCE, FOOTLOOSE, and especially DIRTY DANCING were huge pop culture moments of the decade in terms of their films and their incredible soundtracks that played all over Top 40 radio. A similar trend even occurred in the 2000s with films like SAVE THE LAST DANCE and STEP UP.

But none of those films were the first to present the art of breakdance to the mainstream like 1984’s BREAKIN' - a Menahem Golan and Yoram Globus produced movie for Cannon Films that proved to be one of the most important films in that studio’s history, as well important for dance movies in general. Inspired by Golan’s daughter [who was impressed by a California breakdancer], as well as a 1983 German documentary about breakdancing called BREAKIN’ 'N' ENTERIN' [which also starred Ice-T and Michael ‘Boogaloo Shrimp’ Chambers], Golan & Globus rushed BREAKIN' into production so it could beat the release date of rival Orion Pictures’ own breakdance film of the same year, BEAT STREET. The strategy actually worked, as BREAKIN' made $38.7 million on a $1.2 million budget and proved to be the studio’s biggest success in its history. A sequel was rushed into production [the infamously named BREAKIN' 2: ELECTRIC BOOGALOO, released in the same year], but the Cannon bloom was off the rose at that point due to the company losing their lucrative MGM/United Artists contract due to their release of BOLERO, which was considered an X-rated film. However, the sequel did do well in the box office amid all the behind-the-scenes drama.

So… what made BREAKIN' so popular and commercially successful back in 1984? I mean, the film even made money than SIXTEEN CANDLES in its first weekend, even though it was in less theaters! What was so appealing about this film and is it even worth popping and locking for? 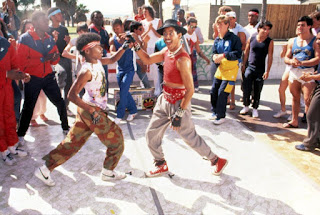 A struggling young jazz dancer named Kelly (Lucinda Dickey) meets up with Ozone (Adolfo Quinones) and Turbo (Michael Chambers) - two breakdancers who show her that dancing is about the art, not about the money. Together, they become the sensation of the street crowds and the mainstream audience, to a snobby dance instructor’s (Ben Lokey) dismay.

REVIEW
I feel the most important aspect of any dance film is the music, correct? While other dance films probably have stronger and more memorable soundtracks overall, the music of BREAKIN' still manages to capture that time frame wonderfully. Honestly, the soundtrack and the dancing that takes place in front of it are the only reasons why BREAKIN' works better than it has any right to. The soundtrack itself was a major hit upon its release, even securing a Billboard Top-Ten single with the still infectious Ollie & Jerry’s “Breakin’… There’s No Stopping Us”.

We also have Rufus and Chaka Khan’s classic “Ain’t Nobody” during a dance montage, as well as an early track by Ice-T, which shows how far he has come since then. While not on the soundtrack, Art of Noise and Kraftwerk can be heard as well. Other dance movies have better soundtracks, but the music included fits the scenes they’re used for. 80s dated cheese at its finest.

Speaking of 80s cheese, BREAKIN' is definitely one of those time capsule films that captures the era so well, it makes me feel nostalgic for the good ol’ days. The fashion is the epitome of the decade, with leg warmers and headbands in the forefront. The hairstyles and colorful neon clothes and locations quickly tell you what era this film is in. Even breakdancing isn’t as popular as it was back in 1984, giving us a look at the street culture and how many in the African-American and Latino communities expressed themselves and bonded. It’s refreshing to watch a movie where rival gangs would rather have dance offs to prove who is the best rather than having them shoot and stab each other for the same reason. I know it’s not realistic, but the world would probably be a better place, right? BREAKIN' is definitely good escapism for 90 minutes. 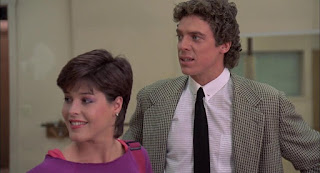 The characters are also colorful and memorable for the most part. Kelly, or Special K, is your typical female lead in a dance movie. She’s an aspiring dancer who believes dancing formally will get her success in life, not realizing that she’ll make better connections doing street dancing instead. She brings some optimism into the film and is the bridge between the street and the high society. Ozone is the hothead leader of TKO, who doesn’t want to make a career out of dancing, even though it’s the best thing he’s good at. He also likes Kelly and quickly gets jealous and paranoid over any guy who gives Kelly any kind of attention. Turbo is the best dancer in the film, having no issues teaching neighborhood children to dance as good as him, while not easily trusting outsiders who may plan to complicate his life for good or bad. These three quickly bond over dance, defying class and race issues to become the best of friends and a solid dance trio.

Then we have the stereotypical snobby dance instructor, Franco, who is also a sexual predator and a manipulator to keep street dancing out of the mainstream. And then we have James, Kelly’s agent who plans on making her a famous dancer. And while these kind of films would make the agent a slimy creep who is willing take advantage of our protagonist, BREAKIN' does the total opposite and makes him a genuinely good person who wants nothing but the best for Kelly and her friends. It feels odd because it’s rarely done in films, but it’s also a pleasant surprise. Here’s a film where people support each other to make their dreams come true, no matter if higher ups and people who don’t understand try to keep them down. That’s why BREAKIN' is still remembered today. It wants its audience to feel good and achieve their dreams - something we all want in life.

While BREAKIN' is focused on the dance sequences, as it should be, it would also help if the film had a story to connect the dance scenes together. Unfortunately, the standard plot has no substance at all and brings down the film as a whole. Now if BREAKIN' was just dancing from beginning to end, this wouldn’t be an issue. But the film tries to add certain plot elements that are barely developed. For example, there seems to be a love angle going on with Kelly and Ozone that the script wants to push for a certain demographic. Even moments of Ozone getting mad at Kelly whenever another man is around showing her affection are just played off as if it doesn’t even matter. And it doesn’t by the end, as the relationship remains the same as it did in the beginning of the film. In fact, the film seems to push more chemistry between Ozone and Turbo [that doesn’t go anywhere either]. Also, the happy ending of BREAKIN' comes off way too predictably and way too simple. I get that BREAKIN' wants people to feel good, but you have to add stakes and a struggle to keep people invested. I’m honestly surprised it took three people to write this film. Like… how?? 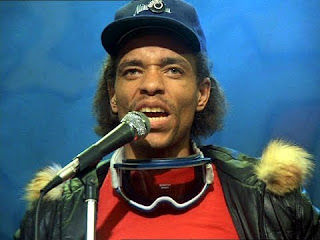 I also felt that Joel Silberg handled some of the direction in a bland way where the dancing didn’t really electrify the film. BREAKIN' is not a flashy film and shots mostly stay static as people dance on screen. And while the dance choreography was good, I felt that whenever people danced together, everyone was doing their own thing and never felt like a real team trying to win battles. Say what you want about those STEP UP movies or YOU GOT SERVED. But at least those films had cohesion in the dance department, making you believe the dancers were in a real squad together. You barely feel that here and the direction doesn’t help.

The acting is also a component that brings BREAKIN' down. I’m not saying that some of it is not unintentionally funny. There is a moment between Lucinda Dickey and Adolfo Quinones where they argue about why they dance that tries to be super dramatic, but ends up being hilarious because Dickey is a bit bland and Quinones tries to compensate by overdoing the emotion and line delivery. I actually busted out laughing because it wasn’t good. Now, I can excuse the dancers for not being the best actors because that isn’t their true profession. Even then, I felt the dancers showed more charisma and personality than Dickey, who just coasts through the film with the same blah delivery. She’s a beautiful woman and she can dance, but the script and her handling of it does her no favors at all. Thankfully Christopher McDonald was around to keep things afloat any time he appeared.

I also have to give a shout out to some guy named… Jean-Claude Van Damme?

I mean, look at this guy! I wonder if he made something of himself after this. Eh, probably not. 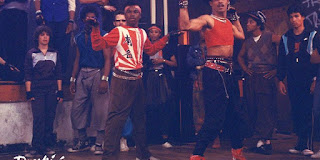 In terms of dance films, BREAKIN' may be one of the most important entries in that genre. Even though FLASHDANCE was released a year earlier and was a huge success in terms of box office and soundtrack, BREAKIN' is really the movie that set the tropes for dance movies that were released afterwards. While the lack of story, not-so-good acting, and some of the direction on the dance sequences bring the film down, BREAKIN' does what it needs to do - showcase a dance fad and give the audience a reason as to why it was so popular at the time. The film also happens to be a fun watch, with colorful characters, cheesy but right-for-the-era music, and cool montages of breakdancers poppin’ and lockin’ for our entertainment. While it’s certainly dated, it’s still a nice nostalgic trip for 90 minutes.