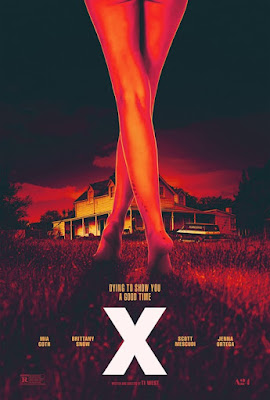 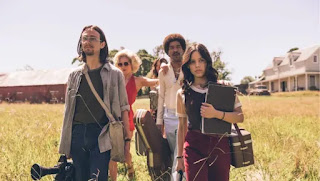 Considering his recognition as an independent filmmaker in both horror and thriller genres, it was surprising to find out that Ti West would have a movie given a pretty wide release in 2022. I can’t say I’m much of a Ti West fanboy. I love 2009’s HOUSE OF THE DEVIL, but 2010’s CABIN FEVER 2: SPRING FEVER is a mess I’d like to forget for the most part. I’ve heard good things about his later films [especially 2011’s THE INNKEEPERS], but his work post-2010 has never kept my attention unfortunately.
But learning that West was releasing a mainstream horror film that was a throwback to late-70s horror called X definitely had me intrigued, especially since it looked like a better version of the TEXAS CHAINSAW MASSACRE sequel/reboot we got from Netflix a month ago. Being a fan of A24’s films and seeing who was in the cast, I surprisingly became pretty hyped for this movie and just hoped for a good time. And while X probably won’t appeal to a mainstream audience outside the horror market, considering its sexual and violent content, it’s definitely a film that deserves a lot of love and good word-of-mouth. Considering what I last saw by Ti West was a terrible sequel many years ago, this was a fun ride in theaters and makes me want to go back into his filmography to catch up on what I’ve missed by this director.
Like HOUSE OF THE DEVIL, X is a great throwback to earlier horror films that built more on tension and suspense rather than jump scares and gore. The first hour is a real slow burn, focused on building the rustic atmosphere and developing the cast of characters beyond their obvious archetypes. For a slasher film, the characters get enough depth for the audience to care about them and see how different they are personality-wise. The protagonists are adult movie stars or crew members working on this particular adult movie. And while they’re liberated sexually and act a bit like entitled divas every now and then, their layers get peeled as the film moves along, revealing private things about themselves that become either endearing or a bit annoying depending on the situation. It’s sometimes refreshing to watch a slasher film where you don’t necessarily root for the killer due to strong protagonists.
Speaking of the antagonists, having an elderly couple be the villains of the film is a bit odd at first, but it quickly makes a lot of sense by the film’s end. In fact, having Howard and Pearl be the cause of the younger cast’s problems is pretty brilliant, considering the themes X is presenting to its audience. Ideas of sexual liberation versus sexual repression plays throughout the movie - not only as the difference between the two sides, but even internally within both the protagonists and antagonists. Some prudish protagonists become more sexually aware and curious, causing rifts within that unit. When it comes to Howard and Pearl, their sexual repression leads to the carnage that eventually arrives, which feels like a sexual release for the couple. I’m sure some went into X thinking it was a slasher involving adult movie characters getting murdered and such, but it’s surprisingly much deeper than that and it kept me invested throughout. 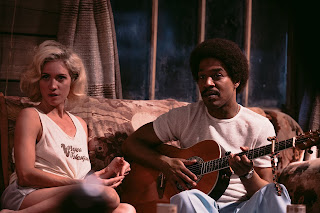 If there’s an issue with the film, it’s a pretty ironic one - characters falling for classic slasher tropes within the film’s last half. Considering how much we learn about them in the first half of the film, they do stupid things you’d expect slasher characters to do. They turn on each other at times. They decide to split up instead of investigating together. And when they grab weapons, especially guns, they don’t check to see if they’re loaded or not. They also do the worst thing - acting like they own the place of a location they know nothing about. Horror characters doing horror things isn’t a flaw. It’s just more of a gripe considering this feels a bit more “elevated” than your typical slasher. I was expecting something less straightforward than what we got.
There were also moments involving religious sermons being played on the television. They were interesting, as some of them connected to what was happening to the film’s characters at the time. And while this aspect leads to a cool twist I didn’t even see coming, I wish there was more focus on this theme because it added another layer to the sexual liberation/repression the characters were deep in. Until the final minutes of the film, this part of the storytelling didn’t really connect with me all that much. I feel it will during a rewatch.
And I think X makes a huge mistake with how it introduces the movie, as the first few minutes don’t add much to the rest of the story that follows it. I guess it was supposed to be a flash-forward kind of thing to tell the audience how the events that happened prior to this portion are meant to be shocking, but you could have cut this part out and the film wouldn’t have changed much. Sometimes less is more when it comes to this kind of storytelling. It was a nice attempt at narration that didn’t do much for the movie as a whole.

Ti West directs a great film here. Along with cinematographer Eliot Rockett, who really creates a beautiful looking film that looks like it ought to belong in 1979, West brings his “A” game with X. West is known for his slow burn storytelling and X is no exception. Yet unlike HOUSE OF THE DEVIL, things do happen within the slower moments through the interesting editing and juxtaposition of scenes [especially the pornographic scenes that connect with what the elderly couple is doing at the same time] and how shots are framed to have characters appear in the background in a really creepy manner. The use of reels during the making of the porn film is an inspired choice that helps differentiate it from the rest of the movie. And both the sex scenes and death scenes are pretty damn cool, built with a lot of tension and brutality at times. I loved the nods to THE TEXAS CHAIN SAW MASSACRE, EATEN ALIVE and the original FRIDAY THE 13TH throughout. X is a strong film visually and one of the better looking slasher films I’ve seen in quite a while. This is what the new TEXAS CHAINSAW MASSACRE should have been.
The cast is really good as well. Mia Goth is the standout, bringing a quiet intensity to her role as Maxine. Goth brings a sexiness and intelligence to her role, making her character one we want to know and follow. Goth also goes the extra mile and does something else in the film I won’t spoil, but I was super impressed how she pulled it all off. I look forward to seeing more of her. Brittany Snow is a bit of a revelation as a sassy porn vixen, giving her character a lot of attitude. I loved her rendition of “Landslide” by Fleetwood Mac and it’s nice seeing her still doing good work after all these years. Martin Henderson is pretty perfect as the sleazy porn producer Wayne. Jenna Ortega is having quite the horror year in both SCREAM (2022) and X, continuing her elevation to a modern Scream Queen in her role as Lorraine - a good girl who goes a bit bad. Scott “Kid Cudi” Mescudi does good as the smooth Jackson Hole, while Stephen Ure is a bit creepy as elderly Howard. I loved how game the cast was for this movie, elevating the script big time and making the film a fun watch.
THE FINAL HOWL 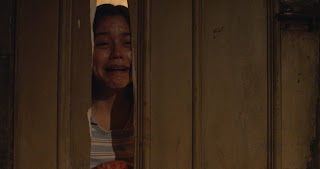 X is pretty much a triumph for director Ti West and the horror genre for 2022. West absolutely captures a slasher film that could have been made in 1979, while elevating it a bit through its themes of sexual liberation and sexual repression, either because of age or religion, within the world of adult movie actors and those outside looking in. The movie didn’t wow me, and certain narrative aspects could have been stronger. But for the most part, X is one of the best modern slasher films due to its strong cast [Mia Goth really shines here for multiple reasons], strong direction and beautiful cinematography and bringing some much needed depth to characters so we can care about all of them and understand each of their actions without much question. The movie doesn’t shy away from either the violence or the sexual situations presented, which I appreciated. And while the movie is a slow burn until the last 40 minutes, you never feel bored due to the wonderful build of the film’s atmosphere and tension. It’s really nice to see a great horror film in theaters that doesn’t need to cash in on a legacy franchise to stand out from the rest of the pack.
SCORE