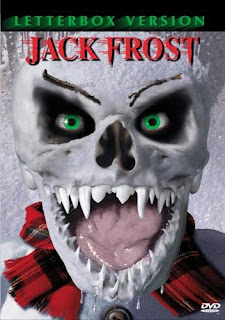 
Am I the only one who feels like Christmas 2009 doesn't feel like Christmas? With the bad economy, lack of Christmas spirit from the people I'm surrounded by, and my current recovery of the very stressful Fall Semester, these holidays don't feel as happy as they should be. Not even the recent blizzard helped. So I did what I haven't done in a couple of months to try and get into the mood of things: watch a holiday-themed horror movie. And yes, I sat and watched JACK FROST.

For the fifth time.

Don't look at me like that! Watching a snowman wet hump Shannon Elizabeth to death is the highlight of any winter! Hey, it beats watching that horrible Michael Keaton version. Yeesh, I rather drink anti-freeze before watching that drivel again. Snowmen should be killing people, not bonding with their kids. Happiness - Bah Humbug!

PLOT
A serial killer named Jack Frost (Scott MacDonald) is being transferred to be executed for his crimes. Too bad this is interrupted when the prison van he's riding in crashes into another vehicle carrying untested chemicals. Jack attempts his escape but he winds up touching the chemicals, which melt him and fuse him with the snowy environment around him, turning him into a shape-shifting snowman.

In a nearby small town, Sheriff Sam Tiler (Chris Allport) becomes concerned when Frost ends up missing due to the accident, having apprehended him and knowing how dangerous he is. His feeling of worry increases when people in the town end up getting killed Christmas-style. Realizing that Jack is now a snowman seeking revenge, Tiler must act quickly to save his friends and family from Jack's frosty terror. 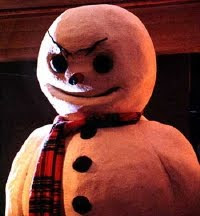 JACK FROST gets a lot of flack from many horror fans over the years, but I don't get why that is. Yeah, it's a really dumb, silly piece of horror fluff. But it never takes itself seriously and just wants to entertain with its B-movie magic. Who wouldn't be amused by a killer snowman spouting really cheesy one-liners while he kills stupid people?

The story really isn't important in a movie like this. It's your standard sci-fi horror/supernatural revenge flick where the villain dies, transforms into something that makes him pretty much immortal, and then uses his new abilities to get revenge on those he or she feels did them wrong. It's been done before and it'll continue for generations to come. What makes JACK FROST stand out are the outlandish scenerios we're subjected to in order for the film to move along. The Shannon Elizabeth "rape" scene, which I mentioned earlier, is one of these hilarious over-the-top scenes. We also get scenes where Frost wraps people in Christmas lights, cuts their heads off with sleds, and impales people with icicle projectiles. We also get a scene where Frost gets inside a scientist's body just to escape being contained for future experiments! Plus how many other films do we see a hair dryer used as a weapon and children making poisonous oatmeal for their dad? It's so campy and so silly, but it's a lot of fun to watch. I don't need to see an Oscar-calibre screenplay every time I watch a movie. Sometimes I just want to escape and be entertained. And JACK FROST does that.

The dialogue in JACK FROST is really corny and cheesy as all hell. Frost's one-liners, in particular, either make you want to roll your eyes or just laugh at how dumb he sounds. Here are some examples: 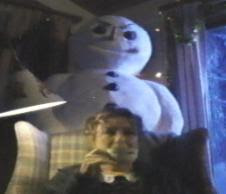 You can't take the dialogue seriously at all. It's like watching the later NOES films, or even CHILD'S PLAY sequels, but cheesier. I want to hate the dialogue but that smile creeps up on my face and I want to hear more. It's great.

The characters in the film are pretty stupid, but then again, they're supposed to be. They're totally clueless to the situation and it makes the scenes where they get killed that more amusing. What also helps that Cooney actually gives these characters a bit of development really quickly, making them a notch above stereotypes. We know who each character is supposed to be and we actually like watching them. That's more than one would expect in a movie like this but I'm glad to see it. Although I do question the family who's son had just been murdered. They didn't even seem to give a crap the kid was dead! I guess we all deal with death differently.

The special effects in JACK FROST are really low-budget, but I think they give the film charm. I know a lot of people complain about how much Jack Frost looks like a puppet made from styrofoam. And yes, that's true. But I think that's what makes the character appealing and fun to watch. And the gore is pretty bad, but it's supposed to be. I think the icicle death was the best one, and the bloodiest. The film knows what it is and does it well. If this film looked like an expensive CGI masterpiece, JACK FROST wouldn't be as enjoyable as it is now.

The direction by Michael Cooney is pretty good. While he doesn't use a lot of stylistic techniques to make the visuals pop out. I did like the shot of a dead woman's point of view as we see the three main cops looking at her. That was pretty effective. Cooney knows how to maintain the tone throughout the film. His goal was to make a cheesy movie and he succeeds in doing that.

The acting is surprisingly not bad at all. Scott MacD 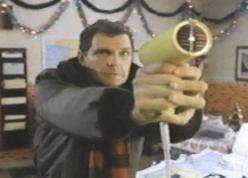 onald is great as Jack Frost. He has a great look for a villain when he's in human form, and then brings the menace with his voice-work after the transformation. He reminded me of a mixture of both Robert Englund and Brad Dourif in his voice. I liked it. Chris Allport was also very good as the protagonist, Sheriff Tiler. He knows how to handle scenes well and has a nice presence whenever he's on screen. I read somewhere that he passed away a year ago in an anvalanche. If that's not ironic, I don't know what is. Marsha Clark was cool as Marla, the police dispatcher. And Shannon Elizabeth, in her first movie role, is very memorable as the very hot Jill. Her snow-rape scene is probably the funniest and most memorable sequence in the entire film. She should be proud of this moment. It definitely beats starring in that awful remake of THIR13EN GHOSTS.

- Don't tell kids "happy" horror stories that are too descriptive of the events that occurred. It'll probably turn them into serial killers. Or into the next Ann Coulter. Neither one is pleasant.

- Never deny a psychotic serial killer a smoke when you're having one. Lung cancer will be the last thing to kill you.

- The town of Snomonton has an annual snowman competition. Unfortunately, Amy Winehouse and Courtney love will be extremely disappointed when they learn the snow used is not the recreational kind. Bummer.

- Don't sled in the driveway of the town sheriff where a killer snowman is hiding out. Your cold heart will melt when that snowman takes you ahead in life. Literally.

- Jill won't get down unless her man puts a log on the fire and brings her a glass of wine. What a cocktease, but I'd probably obey just to have a taste of her AMERICAN PIE.

- Don't stab a pissed off snowman. He'll just impale you to death with his icicles. Just be lucky you weren't penetrated by his carrot nose. That's just embarrassing, although it'll probably improve your vision.

- Jack Frost humped Jill to death. If anyone can make women wet, it's a snowman. 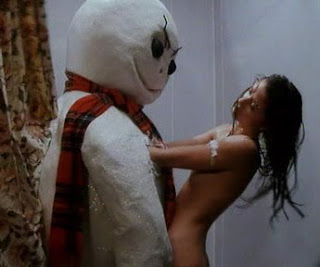 JACK FROST isn't a masterpiece, but it's a fun piece of 90 minute fluff that will put a smile on your face. It's a very entertaining B-movie if you happen to go in with low expectations and get the joke. A definitely guilty pleasure and worthy of an annual viewing during the Christmas season. Merry Christmas everyone!